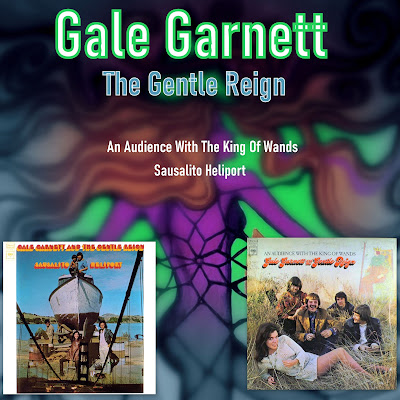 The daughter of a carnival worker father, Gale Garnett was born in New Zealand but moved with her family to the United Kingdom, then to Canada at the age of 11.
Her father died when she was 12, and at 14 she ran away to New York City to pursue an acting career. There she attended the High School of Performing Arts and appeared in Broadway and Off-Broadway productions. After moving to Los Angeles in the early 1960s, Garnett landed guest roles on such popular TV shows as Bonanza and 77 Sunset Strip, as well as a voiceover part in the hit film The Pink Panther (1963).
Garnett put her acting career on hold in 1963 after a singing engagement at a New York nightclub resulted in a recording contract with RCA. 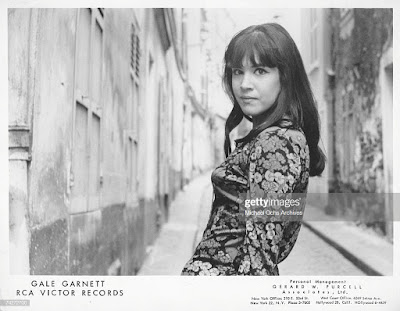 Shortly afterwards, she wrote and recorded the hit song We’ll Sing In The Sunshine.
In 1968 Garnett left her folk roots behind, embarking on a whole new direction and recruiting The Gentle Reign to back her timely foray into the world of psych-rock.
Two offbeat and largely forgotten late 60s albums for CBS resulted, which survive as bona fide collectors’ items from the heyday of the Haight Ashbury era.
Sporting a vocal style somewhere between Bobbie Gentry and Grace Slick, Garnett and friends turned out an eclectic mix of styles on both albums that effortlessly moved between trippy psych, folk rock, pop and most points in-between.
An Audience With The King Of Wands 1968 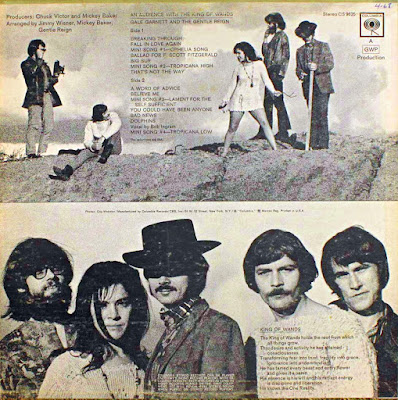 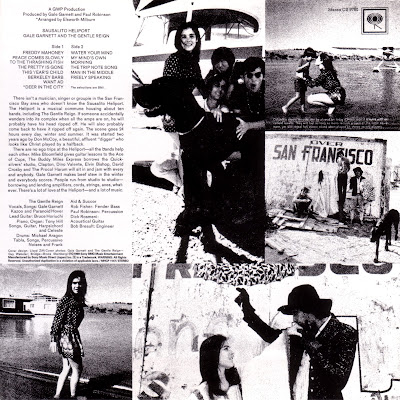 Both albums recorded in the late '60s by the sultry vocalist with backing from the Gentle Reign, a mere smidgen of the woman's immense and unique talent. Like a lot of Folk-Pop performers who began their careers in the early- to-mid-'60s, by the end of the decade Gale Garnett seemed to have drifted into the Rock and Psychedelic scene, hooking up with the band the Gentle Reign to cut two bizarre albums for CBS: An Audience with the King of Wands (1968) and Sausalito Heliport (1969). Singer, journalist, actress (from cult '60s movie Mad Monster Party to My Big Fat Greek Wedding), star of Scopitones (check Youtube for some delights!), Gale Zoe Garnett is a marvel and a one-off.
***
Source: allmusic-wingsofdream.blogspot.com
+ Sharelabels (2)Flag
AllGale GarnettThe Gentle Reign