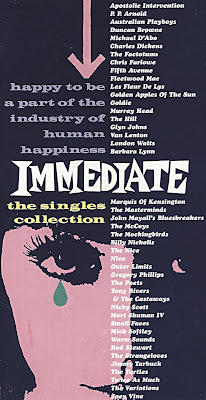 This extravagant six-CD set documents the astonishing life span of the first pop independent label in the U.K., Immediate Records. Founded in 1965, Immediate flipped, flopped, and staggered its own way, competing against unhip American labels like EMI and Decca until late 1969. The label, and the documentary CD set, showcases in particular the Small Faces, who enjoyed a brief U.K. number one hit, Ogden's Nut Gone Flake. More familiar to American listeners will no doubt be the three-chord sock-hop favorite "Hang on Sloopy" by the McCoys, and a number of covers of familiar American folk-rock hits are present as well. The esoteric collector will appreciate inclusions by such café balladeers as the Poets and Les Fleurs-de-Lis, also signed by Immediate before the advent of the swinging London sound, marked by the Rolling Stones revolution and other mod developers influencing the pants off the tiniest studio cover bands. Immediate also helped sculpt the success of anguished bellower Chris Farlowe, soon to be joined by the similarly throaty vibrato of PP Arnold and, of course, manager/producer Andrew Oldham's best toss of the dice, the Small Faces, whom he ripped away from Decca. By the fourth disc, you are, in fact, in the throes of swinging London, featuring Farlowe's heart-stopping "Yesterday's Papers" and Arnold's "The First Cut Is the Deepest," written by the much-in-demand Cat Stevens. Most of the music is minimal and often out of tune, production at an early-time low, replete with tinny echoes and accidental outtake moments. The most successfully recorded instruments seem to be the sitars, baroque strings, and arpeggio harpsichord riffs that "translate" well under Immediate's studio circumstances. Notable moments: Small Faces' "Here Comes the Nice" and "Itchypoo Park," Murray Head's "She Was Perfection," and the Marquis of Kensington's Kinks/new vaudeville hybrid, "Changing of the Guard." This is a luxurious, overcollected document that could be easily managed on one museum-piece disc, although it would be hard cull dozens of small contributions by say, drop-ins Nico, Rod Stewart, and Mick Fleetwood. The jewel on the record is without question the Faces version (sung not by Stewart but by Chris Farlowe) of "Handbags and Glad rags": "They told me you missed school today/So I suggest you just throw it all away/The handbags and glad rags that your granddads had to sweat/So you could buy." Very British, very Immediate.
Review by Becky Byrkit
And TY To Rockasteria For this Share.
CD 2 Tommorow.
Enjoy.
"I hope for nothing, I fear nothing, I am free"
@
Source: allmusic-wingsofdream.blogspot.com
+ Sharelabels (1)Flag
AllImmediate