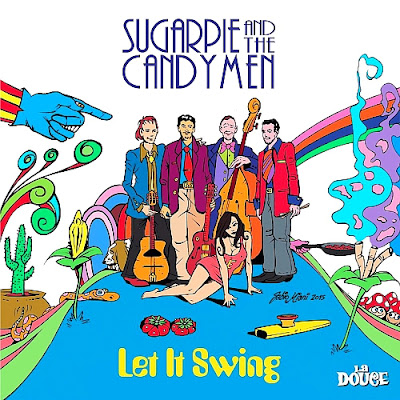 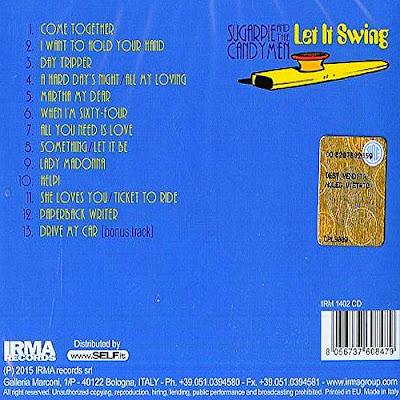 "Let it swing", it's Sugarpie & The Candymen fourth album, is their tribute to the greatest band in the history of pop-rock: the Beatles. The title - which evokes one of the Beatles famous songs : "Let It Be" - and the cover - which winks an eye at their psychedelic masterpiece "Yellow Submarine" - accompany a kaleidoscope of songs ranging from the classics of the early years of the Fab Four, as "She Loves You", to the evergreen recordings of their last years of activity like "Come Together", all rigorously reviewed in their swing style, which has now become Sugarpie’s trademark sound. The Album is a studio reworking of one of their Live Shows dedicated to the Beatles and Louis Armstrong which was first performed at the Ascona Jazz Festival in summer 2014. It was then repeated at Umbria Jazz 2015, and on the famous Web TV Show called Web Notte. The main feature of the Album is the way it was recorded Live almost entirely in a single session in the Studio and the great originality of the arrangements and the feeling of freshness of the performance. Sugarpie & The Candymen have strongly wanted to prove with this record their devotion and their love for the magical band from Liverpool.
Sugarpie & the Candymen began in 2008, when five musicians from Piacenza and Cremona – small towns in Northern Italy – joined their forces and the shared passion for swing music, monouche jazz, pop, and vocal close harmonies. A band was born, with the challenge to marry all these musical styles. The band is made up of singer Miss Sugarpie, aka Georgia Ciavatta, and her Candymen Jacopo Delfini (gipsy guitar and harmonies), Renato Podesta (electric guitar, banjo and harmonies), Roberto Lupo (drums) and Claudio Ottaviano (double bass). Very soon the band became a full-time commitment, starting an intense almost non-stop tour in hundreds of jazz clubs around Italy and Europe.
This first period allowed Sugarpie and the Candymen to work out both their sound and their repertoire: their musical caleidoscope has the most diverse artists one close to the other, such as Led Zeppelin and Django Reinhardt, The Beatles and Bessie Smith, Van Halen and Benny Goodman, Guns 'n' Roses and Ray Charles, Queen and Peggy Lee and so on. The challenge has been won!
In 2010 the band kept evolving and started writing and performing their original songs, both in English and in Italian. They started playing the bigger stages of prestigious festivals all around Europe, and they even did a brief US tour. To further enhance their sound, the band had the opportunity to collaborate both live and in the studio with some brilliant Italiand and American musicians.
mp3
Source: allmusic-wingsofdream.blogspot.com
+ Sharelabels (9)Flag
All60sBeatlesCoversGipsy JazzItalyPopSugarpie & The CandymenSwingVocals