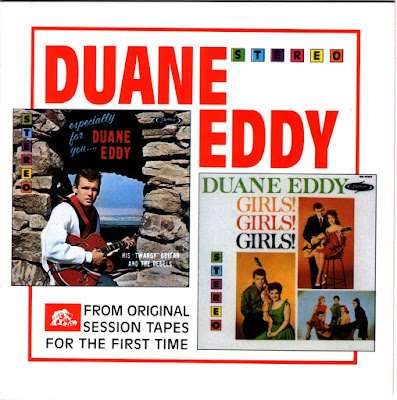 Guitarist with a distinctive "twangy" sound (his own description). Born in Corning, NY, on April 28, 1938, he was one of the foremost instrumental performers of the late 50s and early 60s with a string of hits on both sides of the Atlantic.

Inducted into Rock And Roll Hall of Fame in 1994 (Performer).
Germany's Bear Family label released Duane Eddy's original Jamie albums as a series of two-fers in addition to compiling his complete Jamie recordings in a box set, Twangin' from Phoenix to L.A. Especially for You/Girls! Girls! Girls! is one of the two-fers, compiling two albums from 1959-1961 with the addition of one bonus track. All of Bear Family's Jamie reissues are now out of print, but they remain the definitive sources for Eddy's Jamie material, mastered in stereo from the original session tapes, with a couple of exceptions: "Tuxedo Junction" is presented in both mono and stereo versions because they have different saxophone overdubs, and "Yep!" appears in mono because the original master tape was never mixed to stereo. Especially for You is an atypical Eddy album in that it frequently eschews Eddy's trademark twangy guitar sound for a wild variety of styles, from the Les Paul homage of "Lover" to the jazzy "Quiniela." The western tune "Along the Navajo Trail" adds to the sense of rampant diversity, while the more characteristic "Peter Gunn" and "Yep!" are the album's moderate hit singles. Girls! Girls! Girls! is a thematic album of tunes with girls' names in the titles, and the album cover pictures Eddy with Brenda Lee and Annette Funicello. "Brenda" is an instrumental medley of Brenda Lee's hits, and many of the originals seem to reference current stars of song and screen, from Annette Funicello ("Annette") and Connie Francis ("Connie") to Tuesday Weld ("Tuesday"). The handful of covers, such as "Sioux City Sue" and Pérez Prado's "Patricia," fall in line with the album's formula. Unlike Especially for You, Girls! Girls! Girls! incorporates a mixed vocal chorus and sticks to Eddy's trademark sound with lots of twangy guitar and honking sax. His rendition of "Tammy" is particularly nice, exhibiting the melodic minimalism of Luther Perkins but in a pop context with strings. Girls! Girls! Girls! produced no hit singles, but is an enjoyable set that inexplicably was the lowest charting of Eddy's Jamie albums. 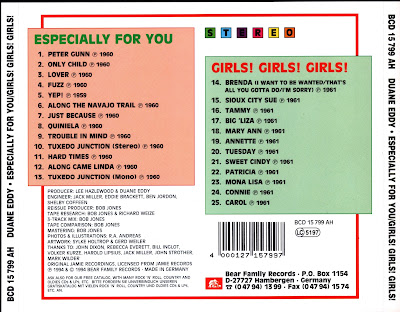