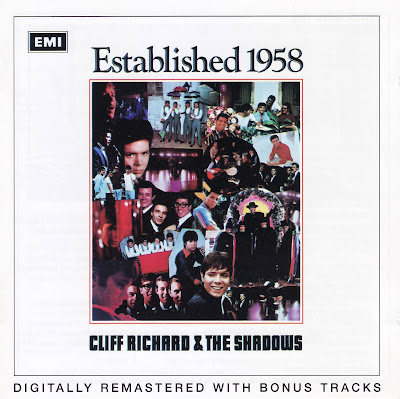 Established 1958 was a tenth anniversary effort by Cliff Richard & the Shadows, reuniting singer and band after several years of establishing separate musical identities. It showcases the songwriting of the bandmembers -- Hank Marvin, Bruce Welch, Brian Bennett, and John Rostill, who, singly or in combination, wrote everything here -- and Richard's preferred style of the period, an adult pop/rock style not too far removed from what Neil Diamond was doing on the opposite side of the Atlantic (except that Richard didn't write songs). Seven vocal numbers feature Richard and seven mixed instrumental and vocal numbers showcase the band exclusively, but little of it ever gets near to the sounds contemporary to 1968, and it was albums like this -- far removed from Richard's efforts at sounding up-to-date, such as Don't Stop Me Now -- that pegged the singer as a British-only pop phenomenon for the next half-decade or more. "Oh La La" is the only up-to-date, real rock & roll number here, and it might've passed muster as a comeback single in the same manner that "Kentucky Rain" did for Elvis Presley, keeping his credibility alive at the time, separate from his movies, for those still listening -- it has some of the urgency and allure of Richard's best solo singles. Some of the other cuts, such as "Somewhere by the Sea," sort of rock, with a beat and some crunchy guitars out in front, and the novelty instrumental "The Magical Mrs. Clamps" shows off the most informal, comical side of the Shadows (who could sound like the early Nitty Gritty Dirt Band when they wanted to). Otherwise, this record is more identified by the slow, very sentimental ballad "The Girl on the Bus," which features Richard and the band with accompaniment arranged by producer Norrie Paramor, or "Maggie's Samba" by Brian Bennett, which sounds like part of a movie score in search of a film. It was a natural fit for U.K. listeners accustomed to Richard and with their own pop perceptions, but would have flown right past American listeners, although its has its moments and some nice, somewhat formalistic pop/rock virtuosity to recommend it four decades on 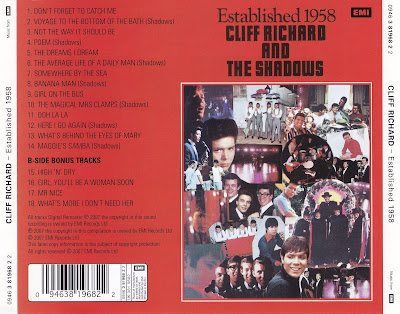