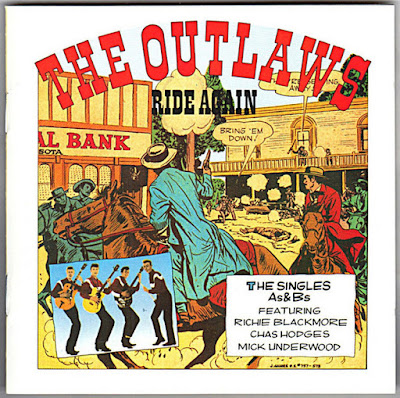 Biography by Bruce Eder
The Outlaws — not to be confused with the American country act of the same name — were one of a wave of instrumental groups that came along in British pop/rock music during the late 1950's and early 1960's. At the time, Cliff Richard's backing band the Shadows, were selling hundreds of thousands of records on their own, separate from the singer, and enjoying the kind of star status that guitarists of just a generation earlier could only have dreamt about. The Outlaws were distinguished by the unique sound of their records, courtesy of producer Joe Meek, and the presence of three top-flight players, one near-legend (Bobby Graham), and one future guitar god, Ritchie Blackmore, in their ranks. The group's roots go back to a North London band called Billy Gray & the Stormers, and a summer 1960 engagement at the renowned Yorkshire holiday camp Butlins. Billy Gray (real name Billy Halsey) was the singer, and the rest of the lineup included Billy Kuy on lead guitar, Reg Hawkins on rhythm guitar, Chas Hodges on bass, and, taking over the vacant drummer's spot, Bobby Graham. At the end of that summer, the group disbanded — no one minded, coming off of a season of fun, women, and booze, and decent pay to boot; most bands at their level never had that much to show for their work.
read more on allmusic.com

The Outlaws - Ride Again (Singles)
All 18 of the songs from their singles are included on this collection. It's all quite dated decades later, but not without its period charm, and the production was actually quite innovative for its period. 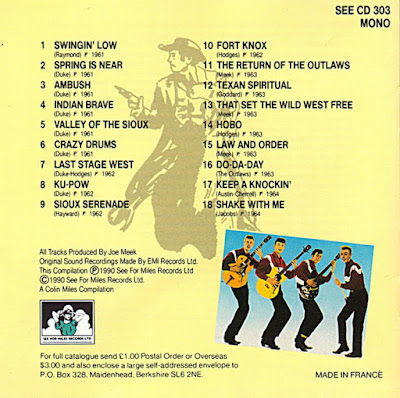