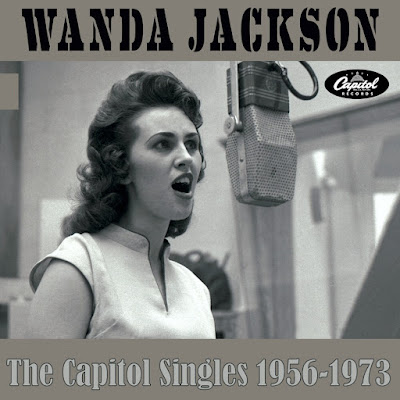 by request
Wanda Jackson enjoyed a long and successful career singing country and gospel material, but her most ardent fans celebrate her as the Queen of Rockabilly, one of the first women who found fame singing rock & roll and among the most powerful voices the music ever produced. Jackson sang with a passion, fire, and spirit that set her apart from most female vocalists of the day, and tunes like "Hot Dog! That Made Him Mad," "Fujiyama Mama," and "Let's Have a Party" showed she was as forceful as any of rock & roll's male stars. She would enjoy more lasting success when she shifted to country sounds in the early 1960s, and her C&W and later gospel sides would reveal a warmth and emotional depth that left no doubt she was a major talent. 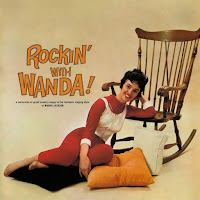 1960's Rockin' with Wanda! is a superb set of rockabilly and early rock performances, 2006's The Very Best of the Country Years is a well-curated sampling of her C&W period, 1972's Praise the Lord was one of the first and strongest of her spiritual efforts, and 2021's Encore showed that she was still full of fire at the age of 83.
Wanda Jackson was born in Maud, Oklahoma on October 20, 1937. Her father Tom -- himself a country singer who quit when the Depression derailed his career -- moved the family to California in 1941. He bought Wanda her first guitar two years later, gave her lessons, and encouraged her to play piano as well. In addition, Tom took her to see such acts as Tex Williams, Spade Cooley, and Bob Wills, which left a lasting impression on her young mind. Tom moved the family back to Oklahoma City when his daughter was 12 years old. In 1952, she won a local talent contest and was given a 15-minute daily show on KLPR. The program, soon upped to 30 minutes, lasted throughout Jackson's teenage years. She was only halfway through high school when, in 1954, country singer Hank Thompson heard her on an Oklahoma City radio show and asked her to record with his band, the Brazos Valley Boys. Jackson recorded several songs with the combo, including "You Can't Have My Love," a duet with Thompson's bandleader, Billy Gray. The song, on the Decca label, became a national hit, and Jackson's career was off and running. She had wanted to sign with Capitol, Thompson's label, but was turned down, so she signed with Decca instead.
Jackson insisted on finishing high school before hitting the road, and when she did, her father came with her. Her mother sewed and helped design her stage outfits, and she would later say, "I was the first one to put some glamour in the country music -- fringe dresses, high heels, long earrings." When Jackson began touring in earnest in 1955 and 1956, she was placed on a bill with Elvis Presley, and the two hit it off almost immediately. Jackson said it was Presley, along with her father, who encouraged her to sing rockabilly; she and Elvis also dated for a while, and it's said that he asked her to marry him, but she turned him down.
In 1956, Jackson finally signed with Capitol, a relationship that lasted until the early '70s. Her recording career bounced back and forth between country and rockabilly; she did this by often putting one song in each style on either side of a single. Jackson cut the rockabilly hit "Fujiyama Mama" in 1958, which became a major success in Japan. Her version of "Let's Have a Party," which Elvis had cut earlier, was a U.S. Top 40 pop hit for her in 1960, after which she began calling her band the Party Timers. A year later, she was back in the country Top Ten with "Right or Wrong" and "In the Middle of a Heartache." In 1965, she topped the German charts with "Santa Domingo," sung in German. In 1966, she hit the U.S. Top 20 with "The Box It Came In" and "Tears Will Be the Chaser for Your Wine." Her popularity continued through the end of the decade.
Jackson toured regularly, was twice nominated for a Grammy, and was a major attraction in Las Vegas from the mid-'50s into the '70s. She married IBM programmer Wendell Goodman in 1961, and instead of quitting the business -- as many female singers had done at the time -- Goodman gave up his job in order to manage his wife's career. He also packaged her syndicated TV show, Music Village. In 1971, Jackson and her husband became Christians, which she says guided their marriage through a rough patch. She released her first gospel album, 1972's Praise the Lord, on Capitol before shifting to the Christian-oriented Myrrh label for three more spiritual albums. In 1977, she switched labels again, this time to another gospel imprint, Word Records, and released two more Christian-themed LPs. 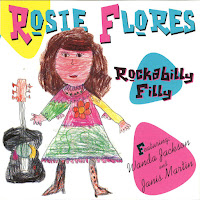 In the early '80s, Jackson was invited to Europe to play rockabilly and country festivals, where plenty of early rock artists found enthusiastic audiences still eager to hear their 1950s hits. Jackson's performances were well received by her fans, and she began playing regularly in Europe and the United Kingdom while still performing her gospel show in the United States. Around the same time, several American country artists, including Pam Tillis, Jann Browne, and Rosie Flores, acknowledged Jackson as a major influence. In 1995, Flores released a rockabilly album, Rockabilly Filly, and invited Jackson, her longtime idol, to sing two duets with her. Jackson embarked on a major U.S. tour with Flores later that year; it was her first secular tour in the United States since the '70s, and put her back into nightclubs. 2003's Live and Still Kickin' documented a pair of 2002 shows in New York City with the revitalized Jackson back in the spotlight. 2003 also saw the release of a new studio album, Heart Trouble, with Jackson joined in the studio by illustrious fans including Elvis Costello, Dave Alvin, and the Cramps. 2006's I Remember Elvis found her interpreting a set of songs made famous by her old friend, as well as sharing her memories of him. 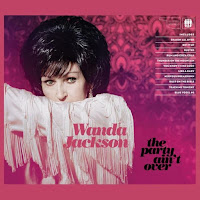 Jackson returned to the studio in 2010 to begin work on an album produced by Jack White. Featuring a band including the White Stripes frontman, his wife Karen Elson, various Raconteurs, My Morning Jacket's Carl Broemel, and a host of others, The Party Ain't Over arrived in early 2011. Jackson's 31st studio album, 2012's Unfinished Business, was produced by Justin Townes Earle and featured original material as well as covers of songs by Woody Guthrie, Etta James, Bobby Womack, and others. Another groundbreaking female rocker, Joan Jett, paid her own tribute to Jackson by producing 2021's Encore, which featured several new songs written by Jackson, as well as a cover of the Johnny Tillotson classic "It Keeps Right on A-Hurtin'." 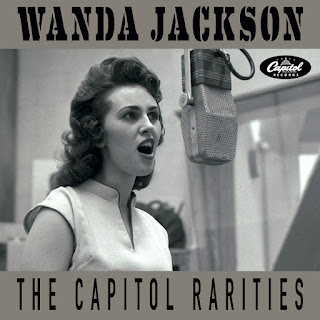