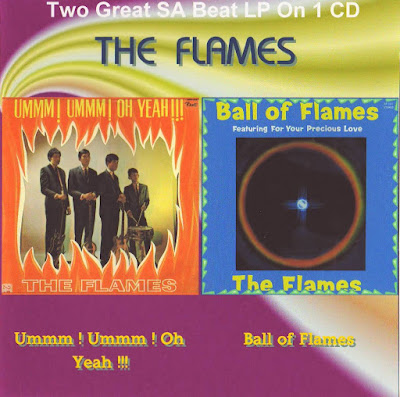 The Flames was a musical group from Durban in South Africa. The band was originally formed in 1963 by guitarist Steve Fataar, bassist Brother Fataar (real name Edries Fataar), drummer George Faber and guitarist Eugene Champion. However this line-up would only be together to record a couple of songs. Ricky Fataar replaced George Faber as the band's drummer around 1964 and Edries Fredericks replaced Eugene Champion as the guitarist. Baby Duval briefly replaced Edries Fredericks in 1967 although it is unclear whether he was involved in any of the recordings that were released. Blondie Chaplin then replaced Baby Duval in 1967. This was to be the line-up from 1967 until their demise as a group in 1970.

Steve Fataar has confirmed that Baby Duval is featured as a performer on the Flames second album "That's Enough", which was released in early 1967.
Discography :

[http://www.the-flames.com The-Flames official website]
As musicians, the Flames broke the mold in almost every way. Of East Indian extraction, they were the only non-African soul group performing in South Africa; they lived in Durban, not Jo-burg; recorded albums, rather than attempting the singles market; and they covered pre-existing songs rather then writing their own material. In spite, or perhaps because, of this unorthodoxy, they were wildly successful. Two group members subsequently emigrated to the States where they joined the Beach Boys in 1972. (Biography by Leon Jackson)
(http://www.classicwebs.com/flames.htm)
(http://en.wikipedia.org/wiki/The_Flames0