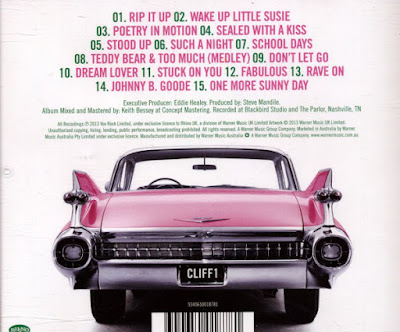 The Fabulous Rock 'n' Roll Songbook is a studio album by Cliff Richard. Promoted as his 100th (!!!) album, the album was released through Rhino Records on November 2013 and is made up of 14 covers of classic rock 'n' roll songs and one new song "One More Sunny Day". The album reached number #7 in the UK Albums Chart and was certified Gold for sales over 100,000 in the UK.
The album was recorded live at the Blackbird Studio and at The Parlor in Nashville, Tennessee, as a tribute to the greats of rock 'n' roll who inspired and influenced Cliff, including Johnny Tillotson, Elvis Presley, Jerry Lee Lewis, Chuck Berry, Everly Brothers and Little Richard. The album is produced by Steve Mandile and Eddie Healy is the executive producer. The debut single from the album is a cover of the Little Richard hit "Rip It Up", it is Cliff Richard's 140th (!!!) single.
* * *
Source: allmusic-wingsofdream.blogspot.com
+ Sharelabels (5)Flag
All60sCliff RichardPopRock 'n' RollUK