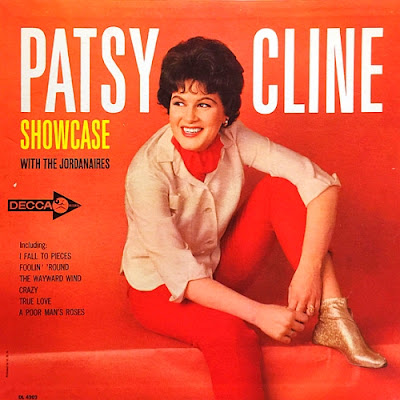 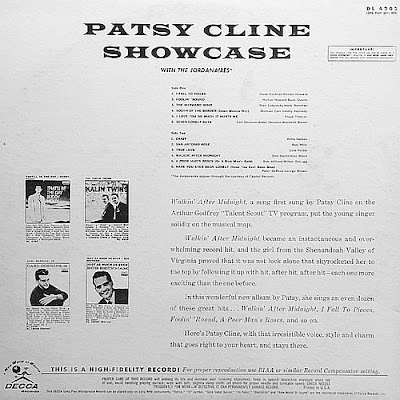 Patsy Cline - real name: Virginia Patterson Hensley (born on September 8, 1932, Winchester, Virginia, USA - died on March 5, 1963 near Camden, Tennessee, USA) was an American country-pop singer and part of the Nashville sound during the late 1950s and early 1960s. She successfully "crossed over" to pop music and was one of the most influential, successful, and acclaimed vocalists of the 20th century. She died at age 30 in the crash of a private airplane. Cline was known for her rich tone, emotionally expressive and bold contralto voice, and her role as a country music pioneer. She, along with Kitty Wells, helped to pave the way for women as headline performers in the genre. She began recording in the mid-1950's, but wasn't very successful until "Walking after Midnight" put her in the spotlight, both in the Country and Pop charts. The following singles tightened her position on the top: "Crazy" written by Willie Nelson, "Three Cigarettes In An Ashtray" written by Eddie Miller and W.S. Stevenson and "I Fall To Pieces" written by Hank Cochran. At the peak of her fame, she was tragically killed in an airplane crash in 1963. Years later her distinctive voice and interpretation was recognized by many and was of great influence of later singers, like Brenda Lee, Linda Ronstadt and k.d. lang, amongst others.
"Patsy Cline Showcase" is a studio album recorded with The Jordanaires and released November 27, 1961 by Decca Records. The album produced two singles that became hits on both the Billboard country and pop charts, "I Fall to Pieces" and the follow-up single "Crazy".
Patsy Cline became the first female solo artist inducted into the Country Music Hall of Fame in 1973, ten years after her death. In 1999, she was voted number 11 on VH1's special The 100 Greatest Women in Rock and Roll. In 2002, she was voted Number One on Country Music Television's The 40 Greatest Women of Country Music, and she was ranked 46th in the "100 Greatest Singers of All Time" issue of Rolling Stone magazine. Her 1973 Country Music Hall of Fame plaque reads: "Her heritage of timeless recordings is testimony to her artistic capacity."
mp3
Source: allmusic-wingsofdream.blogspot.com
+ Sharelabels (5)Flag
All60sCountryPatsy ClinePopUSA