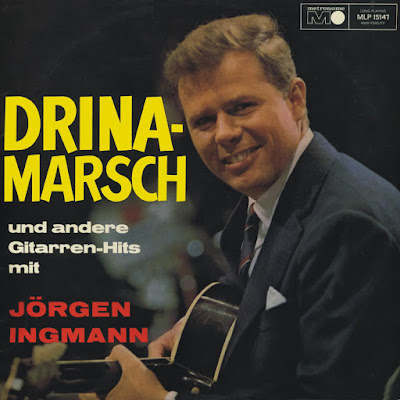 Jørgen Ingmann (born 26 April 1925, Copenhagen, Denmark - died 21 March 2015, Denmark) was a Danish guitarist and for a number of years head of recordings with the Danish branch of the Metronome label, Metronome Records A/S. He was married to Grethe Ingmann from 1956 until their divorce in 1975.
He started out as a jazz guitarist in the 1940's with the orchestras of Svend Asmussen (e.g. Svend Asmussen And His Unmelancholy Danes). In the early 1950's Ingmann developed his own recording equipment making multi-track recording of his guitar-sound possible, and releasing many guitar instrumentals. His version of The Shadows instrumental-hit "Apache" became the US hit version of the tune. Together with his wife Grethe, performing as Grethe & Jørgen Ingmann, they won the 1963 European Song Contest. Besides releasing his own recordings, his orchestra Jørgen Ingmann's Orkester backed a number of contemporary Danish artists in the 1950's and early 1960's. He retired from music in the early 1980's
https://www.discogs.com/artist/692574-J%C3%B8rgen-Ingmann
https://en.wikipedia.org/wiki/J%C3%B8rgen_Ingmann
https://danskefilm.dk/skuespiller.php?id=3113 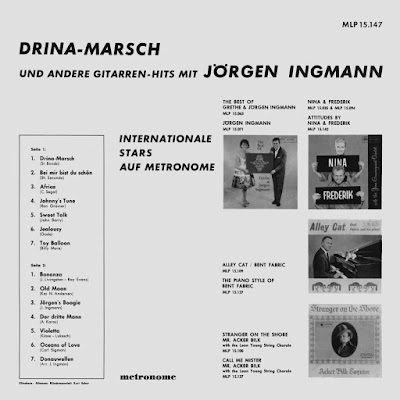