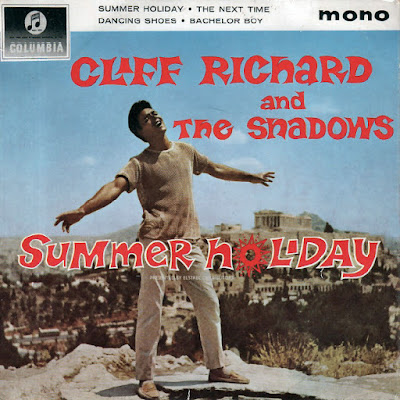 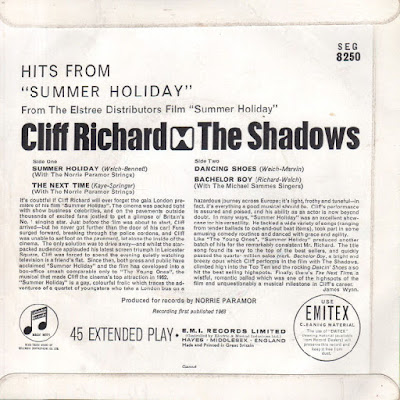 Appropriate For The Weather we are Having Here in Scotland At The Moment...
"Summer Holiday" is a song recorded by Cliff Richard and The Shadows, written by rhythm guitarist Bruce Welch and drummer Brian Bennett. It is taken from the film of the same name, and was released as the second single from the film in February 1963. It went to number one in the UK Singles Chart for a total of three weeks, as had the first single from the film, "The Next Time". After "Summer Holiday" had spent two weeks at number one, The Shadows' instrumental "Foot Tapper" - also from the same film - took over the top spot for one week, before "Summer Holiday" returned to the top spot for one further week. The track is one of Richard's best known titles and it remains a staple of his live shows. It was one of six hits Richard performed at his spontaneous gig at the 1996 Wimbledon Championships when rain stopped the tennis.
A cover version of the song by Kevin the Gerbil was used as the theme from TV-am's 1984 series Rat on the Road II.
The melody of the song is used in the chorus of the 1986 rap tune "Holiday Rap", by the Dutch duo MC Miker G & DJ Sven.
Enjoy.
@
Source: allmusic-wingsofdream.blogspot.com
+ Sharelabels (1)Flag
AllCliff Richard