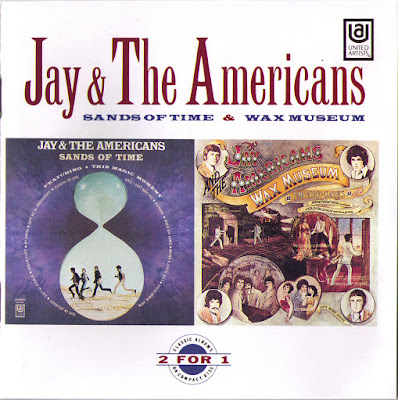 Sands Of Time (1969)
Johnny Rivers' mid-'60s hits may have set in motion the rock & roll revivalism that culminated in Grease and Sha-Na-Na in the '70s, but Jay and the Americans did their part, too, beginning with the 1968 LP Sands of Time. Covering a dozen doo wop singles from the group's own days as street corner singers, Sands of Time updates the material with prominent drums, busy electric bass, and occasional modern-sounding electric guitar solos. It would be impossible to mistake these performances for the originals, informed as they are by the folk-rock vocal groups of the late '60s. The lead-off track, "This Magic Moment," became a million-seller and the group's first Top Ten hit in over three years, which gave them sufficient encouragement to stick with their new oldies rock & roll format for a while. "When You Dance" and "Hushabye" became minor hits, and the closing track, "Goodnight My Love," begins with an Alan Freed aircheck, capping an entertaining and paradoxically forward-looking bit of nostalgia.
=============
Wax Museum (1970)
Wax Museum was the follow-up to the successful oldies revivalism of Jay and the Americans' previous album, Sands of Time, and was also the group's last charting album. "Walkin' in the Rain," an excellent cover of a 1964 Ronnettes hit, made the Top 20, but the album produced no further singles and didn't quite reach the album Top 100. The band later complained that they recorded only reference vocals for the album and United Artists released it before they could set down the finished tracks. The performances are a little weak in spots, but not glaringly so. The inclusion of Ian & Sylvia's "You Were on My Mind" is inconsistent with the theme of the album and sounds a little odd sequenced immediately before "Johnny B. Goode," but the band seems equally capable of handling folk-pop material. Wax Museum fails to attain the heights of Sands of Time, but has several worthwhile moments in addition to "Walkin' in the Rain." 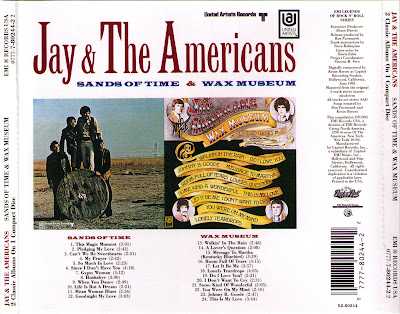