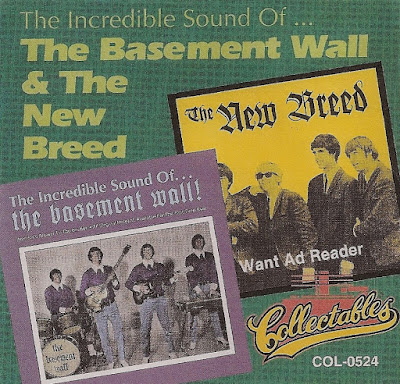 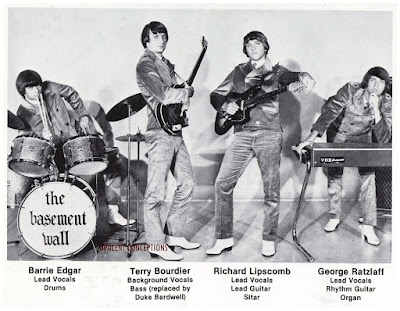 Baton Rouge, LA-based garage band the Basement Wall were formed in 1963 by singer/bassist Terry Bourdier, guitarist Richard Lipscomb, and drummer Barrie Edgar. Drawing inspiration from the British Invasion, the group started its career playing Beatles and Rolling Stones covers. With the subsequent addition of lead vocalist and guitarist George Ratzlaff, the Basement Wall graduated from local frat gigs to nightclub dates as far away as Los Angeles, along the way becoming the highest-paid cover band in the southern U.S., according to the Louisiana Entertainment Association.
In due time, the Basement Wall also began writing original material, in 1968 signing to the Senate label to issue their lone official single, "Never Existed," a keyboard-driven regional smash similar in spirit to Texas punk, no doubt an outgrowth of the band's myriad Lone Star State gigs. Additional recordings were made but remained unreleased until the Cicadelic label compiled The Incredible Sound of the Basement Wall in 1985.
In 1968 Bourdier got married and retired from the road. Despite adding bassist Duke Bardwell, who later toured with Elvis Presley, the Basement Wall soon dissolved. Ratzlaff later resurfaced in the blues-rock outfit Potliquor, recording three LPs for Janus and scoring a Hot 100 hit with the single "Cheer." In mid-June of 2005, the original Basement Wall lineup reunited for the first time in close to four decades, gigging in honor of the band's induction into the Louisiana Entertainment Hall of Fame.
The Incredible Sound Of the Basement Wall  (1985) 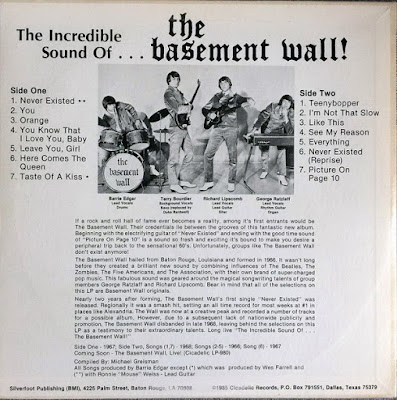 The Basement Wall hailed from Louisiana and was formed in 1966. The band recorded one album in 1966 for a small regional U.S. label , that despite limited distribution, won over a large following across the nation. The band combined the sounds of the Beatles, the Zombies, and the Association to form a unique psychedelic pop sound that was becoming popular with the underground music fans. The New Breed hailed from California and despite the surf movement of the area, decided to explore a psychedelic and garage sound. The band recorded a number of singles for various labels before recording an album entitled Want Ad Reader. The album contained and was named after the band's biggest hit, the title track. With no label support for the album it was never released and the New Breed evolved into Glad and recorded one album for ABC records before breaking up in 1969. Bandmembers went on to become part of such notable '70s acts as Redwing ,Poco, and the Eagles. This single-CD release compiles all of the two band's recorded output including rare singles and the unreleased album.
The New Breed 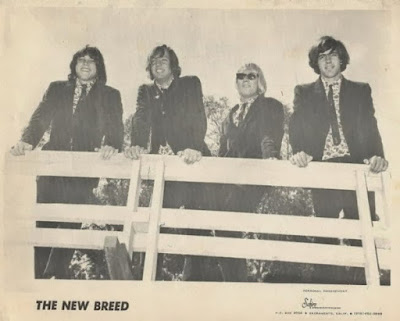 The New Breed were formed in 1965 in Sacramento by a group of musicians who had played in earlier high school bands. The line-up of the group was Tim Schmit, Ron Floegel, Tom Phillips, and George Hullin. The group recorded their first single in 1965. This was successful regionally. They then recorded material for an album which was not released. Three further singles were released over the next year and a half. In 1968 the group signed to a new label and changed their name to Glad.
Releases:
Green Eyed Woman / I'm In Love (1965, Diplomacy 22)
Leave Me Be / I've Been Wrong Before (1966, Mercury 72556)
Want Ad Reader / One More For The Good Guys (1966, World United 001)
Fine With Me / The Sound Of The Music (1967, World United 003)
http://timothybschmitfans.com/newbreed.html
http://ontheflip-side.blogspot.com/2013/10/hanna-barbera-records-spotlight-new.html
Want Ad Reader (1985) 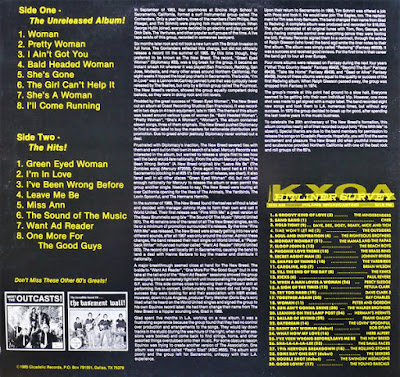 The Incredible Sound Of the Basement Wall /Want Ad Reader (1993) 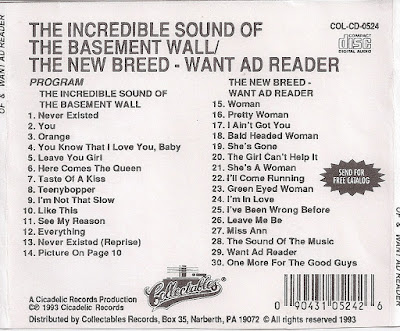