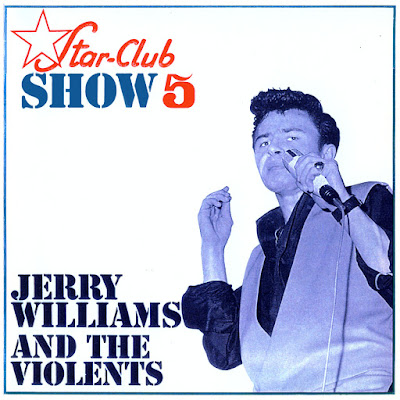 JANCY NEWs
****
Jerry Williams & The Violents
Jerry Williams (vocals, 1961-66)
The Violents :
Hasse Rosén (guitars, 1959-63),
Roffe Hammarström (guitars, 1959-62),
Lennart Carlsmyr (bass, 1959-62), Johnny Landenfeldt (drums, 1961-66),
Tord Jonsby (drums, 1959-61),
Tonny Lindberg (guitar, 1962-65),
Jan-Olof Darlington (bass, 1962-63),
Rune Wallebom (keyboards, 1963-65),
Billy Gustafsson (bass, 1963-66),
Staffan Berggren (1965-66),
Johnny Lundin (1965-66),
*******
The Swedish King Of Rock'n'Roll
JERRY WILLIAMS & THE VIOLENTS
("First Time In England - An Exciting, Sensational and Dynamic Pop Group From Sweden!")
Back in the pre-Abba days when Eurovision meant Elvis Presley singing in German it was somewhat rare to find a band treading the boards that were from ANY other European country apart from the UK but Williams & his rather punkish-sounding Violents were from the same land that spawned Agnetha, Benny, Bjorn and .....whoever the other one was. There are several references to this band on the internet but there does not appear to be a definitive history for a singer who has not only been performing for over 40 years but who appears to be regarded as a pioneer of Swedish popular music, influencing countless musicians along the way (That's Swedish musicians incidentally.) According to one less-than-informative biography, Williams was christened Erik Sven Fernström in 1942 in Solna, Stockholm and was born on his parents sofa - an insightful piece of information I'm sure you will agree. Williams started his career in 1957 and joined forces with the instrumental band The Violents sometime between 1960 & 1962 after the group had decided to augment their line-up with a vocalist. Sometimes known as "Mr.Dynamite" (a nickname stolen from James Brown) Williams outgrew his original employers as his star rose with the The Violents eventually becoming mere backing musicians to the enigmatic vocalist (it says here). "When Jerry Williams gets going you can compare it to a box of dynamite going off. He jumps, struts, twists and exhausts himself completely. His hair flies, sweat pours. Nobody can stand still when he goes for it. Mods and rockers, everybody likes Jerry" says Stora from Sweden. Thank you Stora! We do know that Williams & The Violents played The Star Club in Germany during the same period as the Fab Four and that Williams enjoyed 5 Top 10 hits in his native country during the 60's but had to wait until 1969 before obtaining his first No.1. He appears to have had an extensive discography and apart from being a "rock n'roller" had his own "Jerry Williams Talk Show" on Swedish TV in 1968. He also appeared in the films “G - som i gemenskap” and “Lilla Jönssonligan och Cornflakeskuppen” (What, an entire film about a breakfast cereal?). One Swedish fan sums up the singer by offering the following crucial information; " When the Beatles hit Sweden in 1964 he refused to compromise. I gave no hits but he still could make his living playing. In 1965 Bildjournalen, the teenage paper wrote an biography comparing him to other Swedish rock kings. They had all been forced to go back to their normal jobs." So that clears that up then.
******** 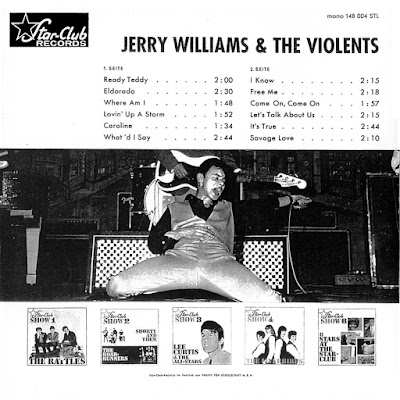