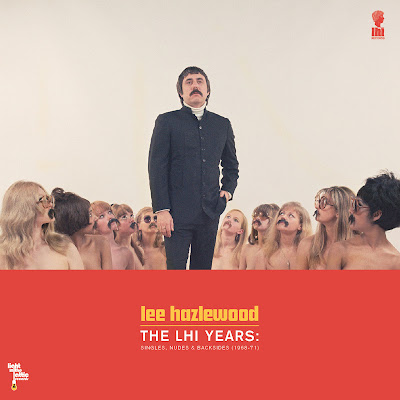 Lee Hazlewood might just be proof of the fact that in popular music being very good at many things can only make it more difficult to gain recognition amongst the pop pantheon. It's the curse of the multi-talented, leaving behind a body of work that defies easy summary or pigeon holing.

He was the man who put the twang in Duane Eddy's legendary guitar sound by using a grain tank as a primitive reverb pedal; just listen to Eddy's 'Rebel Rouser' to hear that distinctive tone and one which prevails in alternative music up to this day, now mainly in the guise of the adjective 'Lynchian'.

As a pop songwriter he asserted Girl Power a good 30 years before The Spice Girls management team with Nancy Sinatra's 'These Boots Were Made For Walking'. Fine, forward thinking pop music all, yet because of his background role in his most famous contributions to the popular music canon he remains, almost five years after his death, quite the enigmatic figure. Where as Jonny Cash left us with his funereal cover version of 'Hurt' (with its moving if somewhat self-aggrandizing video), Lee Hazlewood's final album was poignant, but bore the mischievous, Eddie Izzard inspired title Cake or Death. It's not the sort of final statement that sells scripts for biopics. 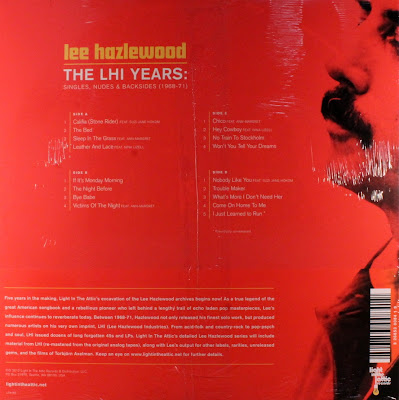 Typically, posthumous reissues and compilations - especially rarities ones - exist to fill in the blanks (to varying degrees of success) or act as timely cash-ins. In contrast The LHI Years gives a surprisingly comprehensive overview of Hazlewood's talents even while focussing on output from just three years on his own Lee Hazlewood Industries label. There are even compelling reasons to recommend it as an entry point for newcomers for two main reasons. Firstly, it's hugely accessible whilst touching on different bases of his musical styles and sounds, but also distinctively the work of Hazlewood. Opener 'Califia (Stone Rider)' sees him in full cowboy-horseback mode, but the string-drenched passages in which Suzi Jane Hokom taunts “Your rocks and grills, mountains and hills, they won't last” are as exquisitely smooth as those accompanied by harpsichord and woodwind on the decadently baroque 'What's More I Don't Need Her'.

There are several duets in the lineage of Nancy & Lee, but Suzi Jane Hokum's other appearance, 'Nobody Like You', is the least typical,an enjoyable psuedo-psychedelic wig out with Hazlewood's submerged in a watery sound effect. Ann Margret's contributions are uniformly enjoyable; 'Sleep In the Grass' shifts from appropriately laconic verses of hazy strings and tinkling glock to ecstatic chanting, Margret brings an irresistible country lilt to 'Victims of the Night's fleet-footed folk-pop and a siren wail to match the mariachi vengeance of 'Chico'. The duets from the Cowboy In Sweden album flirt dangerously with novelty (especially 'Hey Cowboy'), but on 'Leather and Lace' Nina Lizell provides a perfectly seductive foil.

However, the main reason for checking out The LHI Years is the depth of quality that compliments the stylistic breadth. Hazlewood can be as emotionally devastating and intimate as any singer-songwriter whilst still flexing the pop tune chops of a master stylist. 'The Night Before' rides on a funky swagger enveloped in velvet strings reeking of smoke and remorse. Jarvis Cocker was surely making notes circa 1998. Best of all is 'The Bed', a deceptively upbeat acoustic number replete with operatic female backing vocals, slide guitar, organ, but with lyrically pining over a lost love, most climatically when Hazlewood exclaims “Here in this nightmare of darkness I remember the day we wed” over swooning strings. Lyrical and musical emotions are more closely aligned in the thrillingly malevolent folk of 'Bye Babe' (“I guess you sold me down the line when my money went down the drain/I can see you smiling now as my tears come down like rain”) with Hazlewood's baritone in suitably weary tone. 'Troublemaker' on the other hand is a humorous Glen Campbell-esque number portraying Jesus as a no-good beatnik.

In truth at 17 tracks The LHI Years is a bit too long with a couple of forgettable moments ('Come On Home to Me', 'If It's Monday Morning'). However, in covering just three to four years of Lee Hazlewood's less readily available material The LHI Years mines a rich seam of individualistic pop genius, even the rump of which betters that found within the entire back catalogue of many artists.
***
Source: allmusic-wingsofdream.blogspot.com
+ Sharelabels (2)Flag
AllHUS