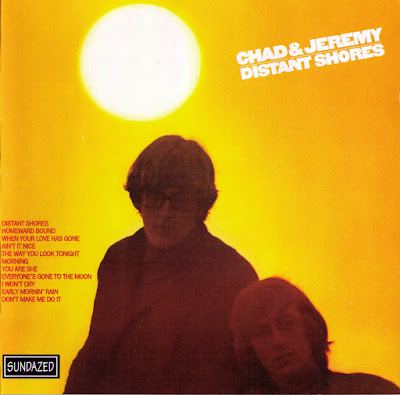 Musical styles were changing and threatening to leave Chad & Jeremy's light, pleasant folk-rock-cum-British beat pop style behind. Amazingly, in the midst of this tectonic shift in the musical landscape, they managed to put together the strongest of their Columbia albums, which isn't saying too much, but for those who care to start with their best effort, this is it. Distant Shores catches the duo belatedly evolving out of their old folk-style and light pop sound, with denser production and some better songs to work with. It wasn't an abrupt break from their past, however, as evidenced by the title track, a beautiful and more complex sequel to "A Summer Song," authored by producer James William Guercio (and sporting a string, horn, and reed accompaniment that sounds like it was lifted straight from the embellishment to Gerry & the Pacemakers' "Don't Let the Sun Catch You Crying"); it might not have stood out on a Beatles album of the era, but for these two, the overall sound was a step forward, at least in ambition (and it was their final Top 40 hit). And with Guercio calling the production shots, they manage to turn Bobby Goldsboro's "When Your Love Has Gone" into a faux Burt Bacharach number that adds up to slightly more than the sum of its parts, as does the album closer, "Don't Make Me Do It," the latter one of three originals by the duo on this record. Their version of Jonathan King's "Everyone's Gone to the Moon" benefits from the pair's harmonies, but otherwise adds little significant beyond a very busy percussion part behind them. Of the other two originals, "You Are She" stands out as a glittering piece of Baroque pop, with enough use of the harpsichord to rival the Left Banke. On the other hand, "The Way You Look Tonight," "Early Mornin' Rain," and "Homeward Bound" (done in an arrangement identical to Simon & Garfunkel's) didn't depart at all from the duo's prior sound, suggesting that even Guercio found his limits in extending their range. Despite these caveats, and the fact that they still had their feet in several different musical camps, there are more high points to this record than anything else that Chad & Jeremy issued in their waning two years. Distant Shores had "transitional" written all over it, although it wasn't clear what Chad & Jeremy were making a transition to. 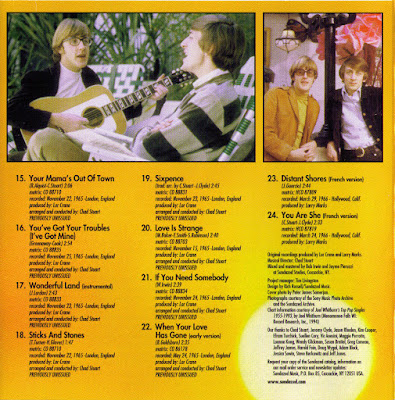 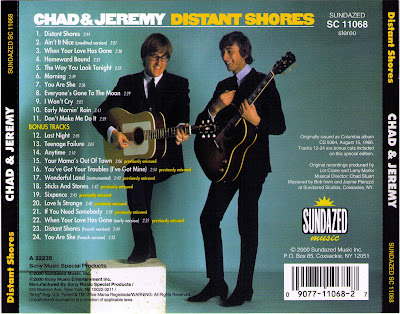