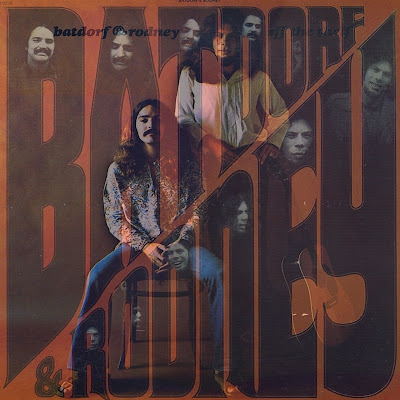 John Batdorf and Mark Rodney were a soft rock duo of the early '70s who made three albums and reached the charts with two singles, "You Are a Song" and "Somewhere in the Night," in 1975, then split up, with Batdorf forming Silver in 1976.
John Batdorf & Mark Rodney were signed by Ahmet Ertugon at Arista Records, the same day as The Rolling Stones, in the next room.  Ahmet took a personal interest in the Batdorf & Rodney sound, and guided their career.  After the Batdorf & Rodney Days, John went on to write music scores for  T.V. and Film, including such shows as "Touched by an Angel."
John has had a music-writing partner (Michael McLean) that worked with him on his most current CD "Home Again."  John has worked with other artists, including James Lee Stanley, to collaborate on a CD of all-acoustic arrangements of Rolling Stones songs "All Wood & Stones"- which U.S.A. Today described as "Paint it Fresh!"  John tours around the U.S. as a solo act, with James Lee Stanley, and with Michael Melvoin.
Mark Rodney began his entertainment career with a recurring role on "The Andy Griffith Show."
http://www.backstagelosangeles.net/id28.html Although they first met in high school in Hollywood, California, John and Mark got musically together in the mystical desert of Las Vegas, Nevada in September 1970.
John, originally from Dayton, Ohio was in a Cowsills type band called the "Loved Ones", featuring soap opera star Patty Weaver and her brothers. He was 15 at the time. They signed with Atlantic Records chairman Ahmet Ertugen and moved west, but the band went nowhere.
Mark, who grew up in Hollywood, California came from a famous musical family. As a teenager, he played in various blues bands and jammed with famous bands like the orginal Blues Image, Jimi Hendrix, and many rock stars in Hollywood clubs.
By 1970, both John and Mark had tired of the Los Angeles scene and were both interested in the new music revolution of the 70s....acoustic music! They re-connected in Las Vegas and started playing acoustic guitars together. They were both heavily in the new sound of Crosby, Stills, and Nash, Neil Young, James Taylor, and Simon & Garfunkel. After three months, they had conquered Las Vegas and had enough originals to head back to Los Angeles. By a magic coincidence, Ahmet Ertegun was in Los Angeles and offered to audition them. He immediately signed them to Atlantic Records and produced them himself in legendary Muscle Shoals, Alabama.
The group eventually recorded three albums on Atlantic, Asylum (one of their first releases), and Arista Records. The three A's! They toured for five years with groups like Bread, The Youngbloods, Loggins and Messina, Three Dog Night, Dan Fogelberg, Chicago, Seals and Crofts, and every group from that era. They had several regional hits but never broke nationally before they had enough of the business. Batdorf and Rodney were actually before groups like America, Seals and Crofts, and Dan Fogelberg. They were always considered a major influence of that sound.
http://batdorfandrodney.tripod.com
http://batdorfandrodney.tripod.com/indexframe.html
http://www.allmusic.com/artist/john-batdorf-mn0000217365
http://www.sonicbids.com/2/EPK/?epk_id=92715
http://www.johnbatdorfmusic.com/brhistory.html
http://en.wikipedia.org/wiki/Silver_(band)
***
Batdorf and Rodney - Off The Shelf 1971 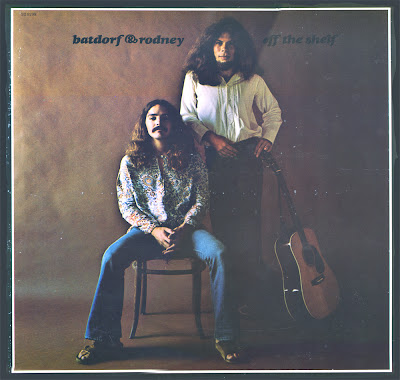 This was Batdorf and Rodney's first album. The song "Can You See Him" received the most airplay on FM radio stations. According to Mark Rodney, he did most of the lead guitar work on this song and this is his favorite song from all of their albums.
Personnel:
Guitar and voices: John Batdorf and Mark Rodney
Vibes and piano: Barry Beckett
Bass: Chris Ethridge and Dave Hood
Drums: Roger Hawkins and John Barbata
Batdorf & Rodney - Batdorf & Rodney 1972 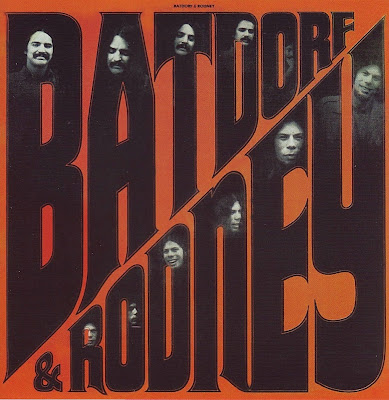 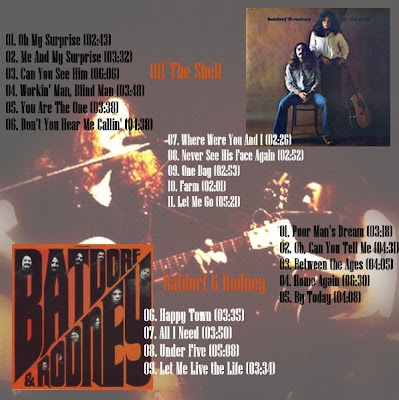