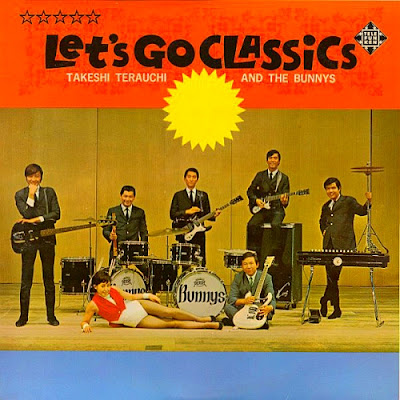 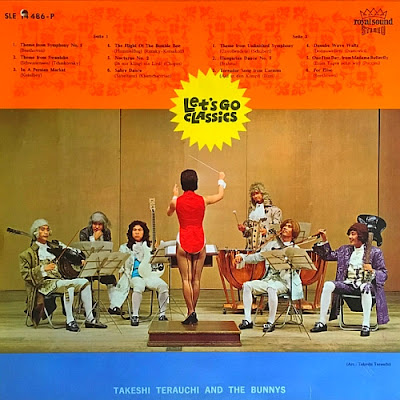 Takeshi Terauchi (born January 17, 1939 in Tsuchiura, Ibaraki Prefecture, Japan), also known as Terry, is a Japanese instrumental rock guitarist. His preferred guitar is a black Mosrite with a white pickguard. His guitar sound is characterized by frenetic picking, heavy use of tremolo picking and frequent use of his guitar's vibrato arm. Terauchi started his career playing rhythm guitar for a country and Western act "Jimmie Tokita and The Mountain Playboys", which had bassist Chosuke Ikariya. In 1962 he formed his first group, The Blue Jeans. However, in 1966 he left the group and formed The Bunnys with whom he played. In May 1967, he also established his own company named "Teraon".He left the Bunnys in 1968.
He reformed the Blue Jeans in 1969 and the band has been active until today.
Album 'Let's Go Classics' is fuzzy instrumental covers for classical themes - Beethoven, Tchaikovsky, Ketelbey, Rimsky-Korsakov, Chopin, Khatchaturian, Schubert, Brahms, Bizet, Ivanovici & Puccini.
mp3
Source: allmusic-wingsofdream.blogspot.com
+ Sharelabels (8)Flag
All60sBeatCoversInstrumentalJapanPopTakeshi TerauchiThe Bunnys