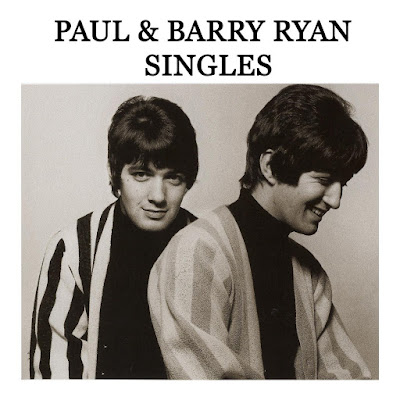 The twin sons of popular singer Marion Ryan, Paul (b. Paul Sapherson, 24 October 1948, Leeds, England, d. 29 November 1992) and Barry (b. Barry Sapherson, 24 October 1948, Leeds, England) were launched as a clean-cut act to attendant showbusiness publicity. Their debut single, ‘Don’t Bring Me Your Heartaches’ reached the UK Top 20 in 1965, and over the ensuing months the siblings enjoyed respectable, if unspectacular, chart placings with ‘Have Pity On The Boy’ and ‘I Love Her’. The Ryans shifted away from their tailored image with ‘Have You Ever Loved Somebody’ (1966) and ‘Keep It Out Of Sight’ (1967), penned, respectively, by the Hollies and Cat Stevens, but such releases were less successful. They split amicably in 1968 with Paul embarking on a songwriting career while Barry recorded as a solo act. Together they created ‘Eloise’, the latter’s impressive UK number 2 hit and subsequent million seller, but ensuing singles failed to emulate its popularity. Paul’s compositions included ‘I Will Drink The Wine’, which was recorded by Frank Sinatra, but neither brother was able to sustain initial impetus. During 1969 Barry had an accident which caused serious burns to his face. In the 70s Paul moved to the USA, but later left the music business and opened a chain of hairdressing salons. 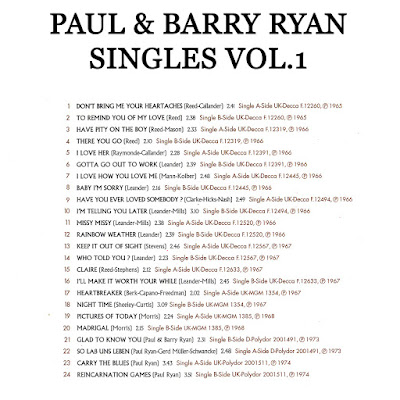 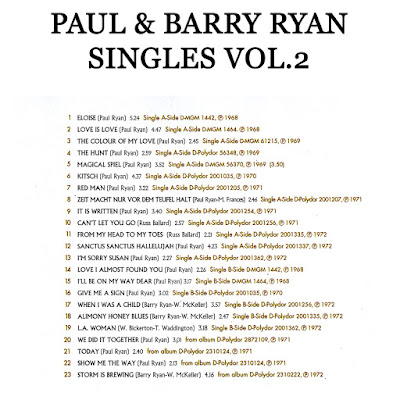