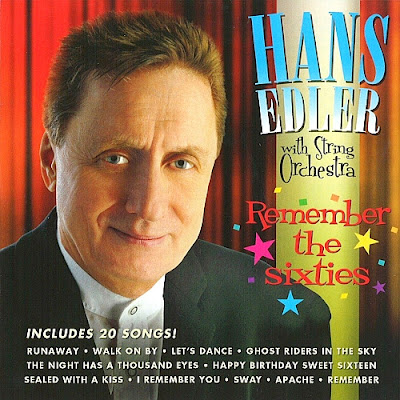 Hans Edler (born in Björkhagen, Stockholm, Sweden on March 23, 1945) is a Swedish pop musician, record company manager and concert promoter. Edler came from a musical family. His mother was a music teacher and his grandfather was a folk musician from Jämtland. In the 1960s, he became a teen idol, when he played in the two bands Ghostriders, a pop band influenced by The Shadows, and We 4. In 1969, he signed for a three-year project Elektroakustisk Musik i Sverige (EMS) in Stockholm led by Knut Wiggen and Gunnel Lundholm. At the same time, he studied mathematics and become a music studio assistant, giving him many opportunities for experimenting with the various technologies available. His initial studio work appeared on his 1971 album Elektron Kukéso which he released on his own record label, Marilla. The music was created entirely with computers and other electronic equipment at EMS as a mixture of pop, psychedelics and electro-acoustic experiments. On top, Edler added his dark, often mournful songs. Finding critical acclaim and longevity, it has achieved cult status with fans. He has continued his musical career ever since, also managing other artists through his studio. In 2004, he released also Elektron Kukéso on the Boy Wonder Records label. In the 1980s, he had also released a series of disco hit covers entitled Jukebox Graffiti. In 2009, he released albums "Remember the Sixties", carving out a niche as a revivalist from the 1960s.
tracklist:
01 - The Night Has A Thousand Eyes
02 - Johnny Remember Me
03 - Runaway
04 - I Remember You
05 - Walk On By
06 - Happy Birthday Sweet Sixteen
07 - Ghost Riders In The Sky
08 - The Young Ones
09 - Mona Lisa
10 - Sealed With A Kiss
11 - Just Like Eddie
12 - Poetry In Motion
13 - Sway
14 - Apache
15 - If I Had A Hammer
16 - You're Sixteen, You're Beautiful And You're Mine
17 - Remember
18 - Take Good Care Of My Baby
19 - Dreamin'
20 - Let's Dance
mp3
Source: allmusic-wingsofdream.blogspot.com
+ Sharelabels (7)Flag
All60sBeatCoversHans EdlerPopRockSweden