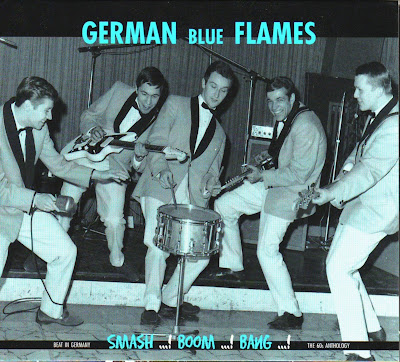 The German Blue Flames (not to be confused with the British outfit the Blue Flames, who were associated with Georgie Fame) were a German quintet that specialized in American-style rock & roll. Founded by Heinrich "Heiner" Landwehr (bass) and his classmate Hartmut "Kuli" Kulka (guitar) in 1962, the duo subsequently expanded to an actual group, initially doing instrumentals. Their initial inspiration included the Shadows, and Landwehr and Kulka were heavily influenced by early-'60s British rock & roll in general; it was on a visit to London that they saw Georgie Fame's band the Blue Flames in action and decided to use a variation on the name for their own group. They later added vocal numbers to their repertory and proved surprisingly good at assimilating an authentic American sound. One of their songs, "Please Don't Say That It's Over Now," sounds almost more like the Searchers than the Searchers do and uses a melodic line lifted from the Four Seasons' "Dawn" in a completely unexpected (and diverting) manner. They could sound dorky at times in the way that only European bands trying for an American sound could come out, as on "Sunbeams in the Sky," but absent those few lapses, they're never unlistenable and they play and sing with a bracing enthusiasm. They were highly adaptable, their sound evolving from basic dance-style American rock & roll to folk-rock and even taking on a garage punk feel on their version of the Association's "Along Comes Mary." The German Blue Flames lasted until 1967, though they seem to have stopped recording officially. Hartmut Kulka kept working into the early '70s, moving into a slightly more progressive sound in the process in tandem with Phil Cantley, an ex-member of a group called Gaslight Union. The German Blue Flames never achieved any recognition beyond the borders of their own country, but as a support act, they shared stages with the likes of the Easybeats and the Creation when they played German venues. In 2001, Bear Family Records issued a 29-song CD of the complete recordings of the German Blue Flames, part of its Smas 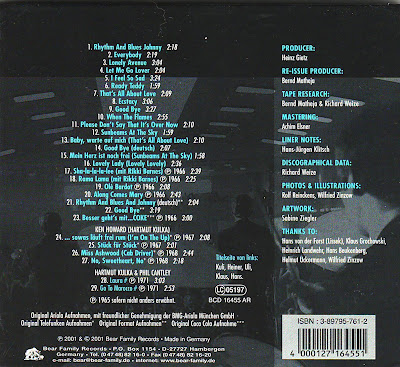