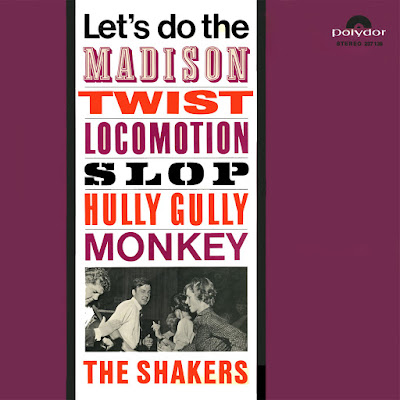 The Shakers - Let's Do The Madison, Twist, Locomotion, Slop, Hully Gully, Monkey
Polydor 237139 / 46639
(KING SIZE TAYLOR & THE DOMINOS)
Edward 'Ted' Taylor, called 'King Size' in a not-too-subtle allusion to his formidable appearance, was already a highly experienced member of the first music generation from Liverpool when he made his first trip to Hamburg. He and the Dominoes claimed, probably justifiably, that they were one of the very first rock bands in their hometown. It's a fact that they were the first Merseyside group to go on air at Radio Luxembourg. As was so often the case, the Dominoes reached back to the end of the Skiffle era. Both, Ted Taylor and Bobby Thompson were members of the James Boys Skiffle Group as early as 1957. The first real Dominoes group existed by the end of 1957, but only as a pure Rock'n'Roll band. Charlie Flynn and Sam Hardie belonged to the group, two names that would remain constant in the band's ever changing genealogical tree. The name King Size Taylor And The Dominoes is mentioned for the first time in 1960. That year, the musicians divided between the Dominoes and Ian And The Zodiacs....
Although the Dominoes were under contract with Philips, Murphy had his eyes on the idea of recording them for Polydor. Since King Size Taylor And The Dominoes were obviously willing to try out anything, they soon reached an agreement. Under the pseudonym of the Shakers, the band's first LP was soon released with three singles drawn from that album, all on Polydor. Tony Sheridan had used similar methods. While under contract with Polydor, he recorded as a member of the Star Combo for Philips, reinventing his last name as Dan Sherry. After the Polydor recordings, Sam Hardy joined Sheridan and his often changing Beat Brothers to finally end up with the German-English Tramps...
(http://www.center-of-beat.com/starclub/bands)
Ted "Kingsize" Taylor - lead guitar/sax/vocals
John Frankland - guitar/vocals
Bobby Thompson - bass guitar/vocals
Sam Hardie - keyboards
Gibson Kemp - drums
Claiming to be the first of the Merseybeat groups, the Dominoes were formed in late 1957 by ex-members of two skiffle groups - The Sinners & The Bobby Bell Rockers. The following year, Taylor joined from the James Boys.
Taylor, with his trademark chequered jacket, would go on to become a stable element in a group which was afflicted by many changes of personnel. For a period between 1960 and 1962 a young Cilla Black sang with them.
They became an integral part of the Hamburg scene. Indeed, it was Taylor, using a home tape recorder, who recorded The Beatles playing live at The Star Club during one such visit in 1962.
Apart from recording under their own name, they also released records as "The Shakers", but despite being a fine group and at the forefront of the action in Liverpool, they received little national publicity and none of their records sold in sufficient quantities to make the charts.
Taylor and The Dominoes parted company in mid '64, shortly after backing Chuck Berry on his first tour of Britain. The Dominoes disintegrated fairly quickly but Taylor went on to work with The Griff Parry Five before forming Kingsize Taylor & His Band.
With success still eluding him, Taylor quit music in 1967 and returned to working in the family butcher business.
01 - Twist And Shout
02 - Hippy Hippy Shake
03 - Money
04 - Hello Josephine
05 - Memphis Tennessee
06 - Whole Lot Of Lovin'
07 - Domino Twist
08 - I Can Tell
09 - Mashed Potatoes And Hot Pastrami
10 - Ruby Ann
11 - Long Tall Sally
12 - Dr. Feelgood
13 - Sweet Little Sixteen
14 - Country Music
15 - Dizzy Miss Lizzy
16 - Green Onions 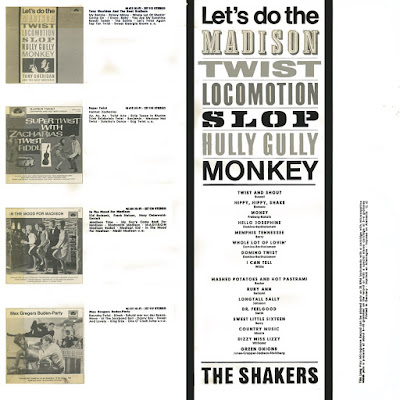 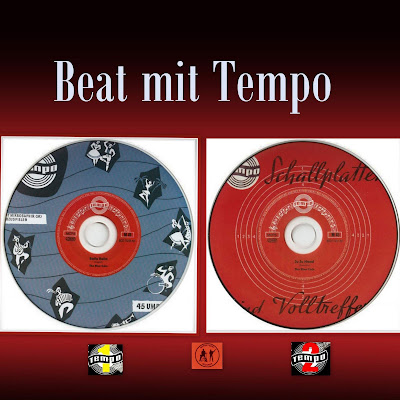 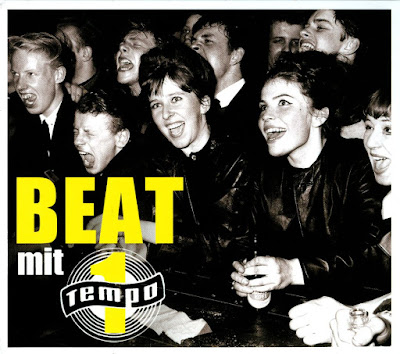 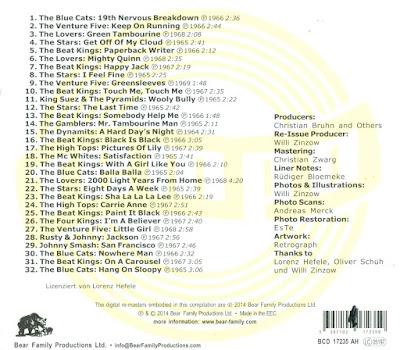 ---------------------------------------------------
"Аbove fifty years ago, the Federal Republic of Germany experienced the dawning of a new age – without historians even noticing it. For the second time within two decades the country was jolted from its Schlager beatitude. While the 1950s brought American Rock 'n' Roll, it now was British beat music: in 1964 the Beatles escaped from the Star-Club, Hamburg's rock enclave, to play on the world stage.
Attentive record company executives from Germany took notice of this and it led to Tempo Records, a small label founded during the 1930s with a long history of German language releases, making a 180 degree turn. The two CDs 'Beat mit Tempo' are documents of a short lasting musical era, unique evidence of a change in taste. Bear Family has excavated the Tempo masters, a collection of cover versions of popular songs of the Beat Revolution, originally released in quick succession. Initially, the Munich-based record label had released a wide range of highly commercial music, from traditional German folk music to Schlager songs. Now they began adding English language songs to their repertoire, a major step for a label focussing on vocalists like Fred Bertelmann. Bertelmann, Peggy Brown, Rainer Bertram, Teddy Parker, and many others also recorded for Tempo under various pseudonyms.
Most of the musicians copying beat music for the Munich company remained nameless, working under pseudonyms. Although the Blue Cats, the Venture Five, the Gamblers, the High Tops, or the Four Kings bore English names, they most likely had never been to England or America. In most cases you could easily detect their German accent. It may well be, though, that one or another Englishman played in the Beat Kings. At least we know something about Jimmy Field's bio: the singer, real name Claus Herwig, later changed his name from Jimmy Fields to Teddy Parker (see also Bear Family CD 'Nachtexpress nach St. Tropez', BCD 15965). While studying law he won an amateur vocal contest and signed a contract with TEMPO RECORDS. He received his stage name, Teddy Parker, from Telefunken in 1962, a pseudonym he's using until today.
It is interesting to learn that the man behind the Tempo productions, Christian Bruhn, later became one of the leading managers in Germany's Schlager scene. Under his pseudonym, Teddy Todd, Bruhn worked as a bandleader for TEMPO. In 1957, he started his career at Tempo as an assistant recording engineer. Later he became a music producer. And he also wrote several songs. Apart from that, songs originally recorded by the Beatles, the Rolling Stones, the Spencer Davis Group, and actually almost everything popular during the mid-sixties, was covered in Munich – even American hit records were sold under the 'Beat' moniker at Tempo. The results, although not of consistent quality, deserve to be heard."
--------------------------------------------------- 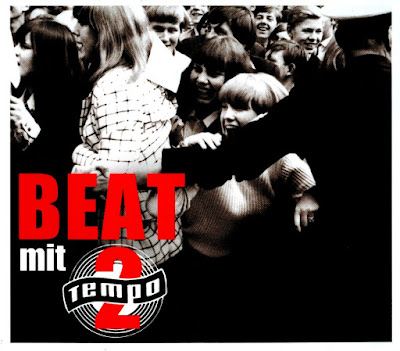 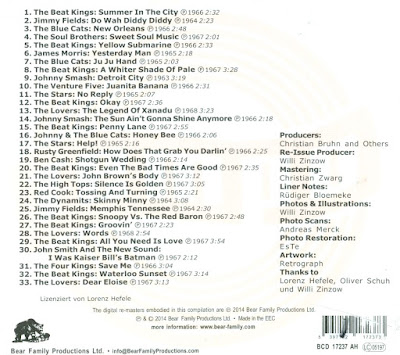 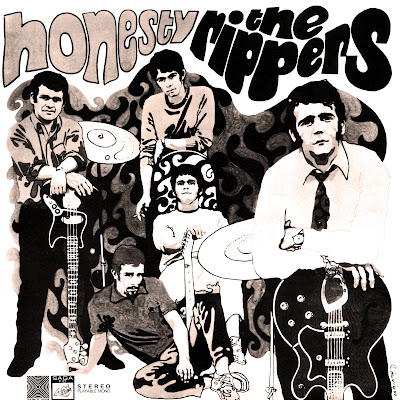 At first this is no Krautrock. The Rippers were a German band of five students aged between 20 and 23 years. The music of the boys (today probably all grandfathers) was of course orientated on the then overseas sound from America as well as from the British role models. Nevertheless, you can clearly hear German idiosyncrasies in her music. The music is strongly influenced by an organ in the accompaniment. My Flight is a piece that is supposed to sound like US soul and makes this very convincing. All in all, the album is very pop psychedelic and in my opinion one of the strongest albums of a German band from the sixties and also because they didn't played the usual Beat band sound most of the popular german bands played. Of course you can't it compare with british or US acts but the songs had a particular kind of charme.(Frank) 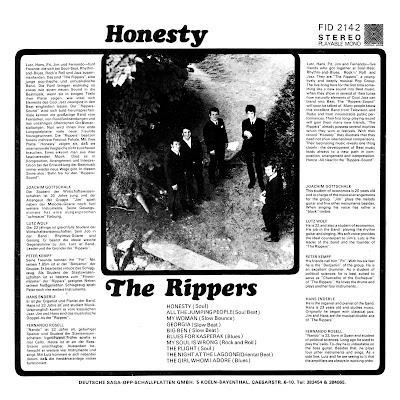 Thanks Ezhevika Fields for this
and
Pop On The Run for review.
***
Source: allmusic-wingsofdream.blogspot.com
1 Comments+ Sharelabels (2)Flag
AllGermanyThe Rippers 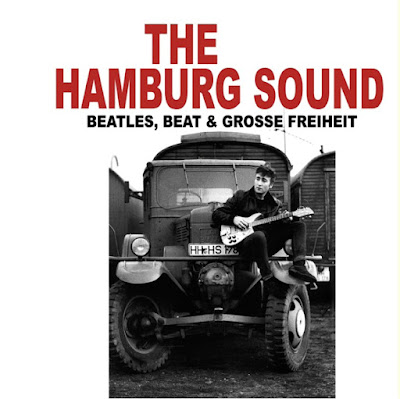 From 1960 to 1970 a music developed on the stages of the Hamburg clubs, which went around the world as Merseybeat, but was called 'The Hamburg Sound' by many participants. Of course, this simple mixture of rock 'n' roll and skiffle was originally created at the end of the 50s in the coffee bars of Soho and in the Liverpool cellars and dosshouses, where young amateur musicians disrespectfully mixed up the songs of their favourite interpreters and beat them out of their instruments with almost indomitable energy. But the young bands and their sound only got the necessary professional polish during the endless Hamburg stage weeks and months.

In 1960 The Jets came from London with Tony Sheridan on the lead guitar to the Kaiserkeller on Große Freiheit. In the following years Tony became a role model for an entire generation of musicians. The jets enthused the Hamburg youths so much with their new, wild music that the band was wooed away for the bigger Top Ten Club on the Reeperbahn. Their successors in the Kaiserkeller were the young Beatles from Liverpool, who soon moved to the Top Ten to celebrate triumphs with Sheridan and make their first recordings under the direction of Bert Kaempfert in the Friedrich-Ebert-Halle in Harburg. The old folk song My Bonnie, sung by Tony Sheridan, was recorded then, as was John Lennon's interpretation of the title Ain't She Sweet.

In the top ten, the Beatles had the most live appearances of their entire career in 1961, and soon they were the absolute darlings of the audience. Word got around on St. Pauli that there was money to be made with the new music, a lot of money.

On 13 April 1962, the Star Club was opened in the former Stern cinema of Große Freiheit 39. His owner Manfred Weissleder had succeeded in winning the stars of St. Pauli for his business: Sheridan and the Beatles. The Star-Club was also a huge success, especially since Weissleder always engaged real US stars to his local heroes, so to speak the forefathers of the new sound. The giants of Rock 'n' Roll gave each other the door handle in his club. The real pillars of his business, however, were the everyday bands that played there day in, day out to dance. Young bands from England, mainly from Liverpool, who developed their own style in the Star Club.

Nowhere else in the world was there a better 'Show Academy' than in Weissleder's 'Beatschuppen'. At least three chapels per night alternated there and could learn from each other. In addition, there was always very close contact to the US stars, who willingly revealed tricks to their students. Gene Vincent was one of the first stars to appear in Great Freedom. He performed there for weeks and fraternized with colleagues and fans, whom he also visited at home. John Lennon had himself photographed with his idol.


Some of these regular bands stayed on the Elbe for months, even years, forming the basis for the 'Hamburg Sound'. The former 'Free and Barber City' (after Chris Barber's Jazz Band, which was extremely popular in Hamburg in the fifties) finally became the 'Beat City'. Dance clubs modelled on Top Ten and the Star Club sprang up like mushrooms. Not only in Hamburg, but, parallel to the success of the Beatles, soon everywhere in Europe and around the globe.

Hamburg remained the musical centre of the world for a few years. British groups came to the Hanseatic city on suspicion in order to get as much involvement in the Star Club as possible. Only a few, however, were able to enter the professionally managed holy halls as 'side entrants'. Most of them ended up, if at all, in the many other clubs in Hamburg or in the surrounding area, in Kiel, Eckernförde, Lüneburg: There were clubs everywhere, and beat bands everywhere. Too many, now also German.

Most shops and bands were in Hamburg, and the control centre was the Star Club, where current stars were hired again and again: such different artists as Ray Charles and Jimi Hendrix, Chubby Checker and Vanilla Fudge and so on - all excellent guest lecturers for the local bands, who either soon became famous themselves or at least produced musicians again and again (like the later Deep Purple guitarist Ritchie Blackmore), who would themselves gain star fame. 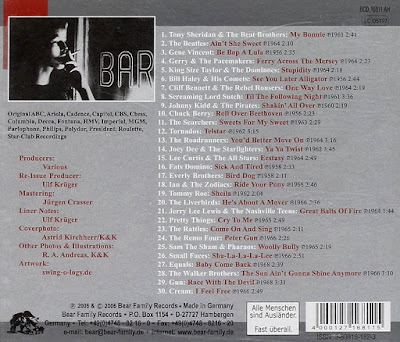 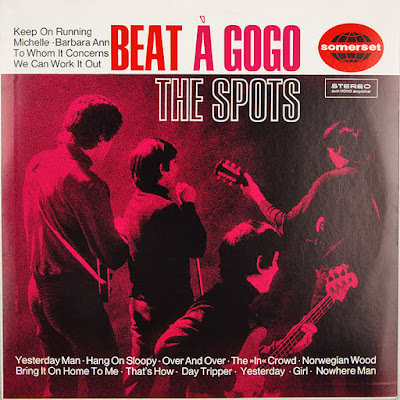 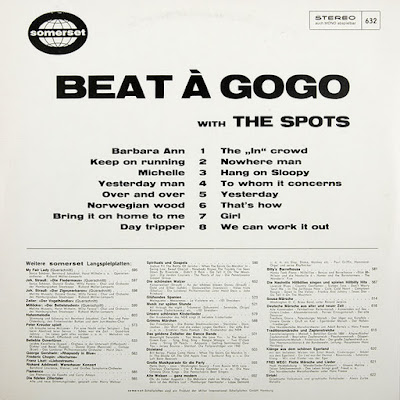 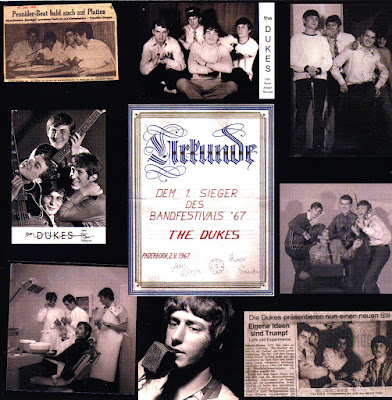 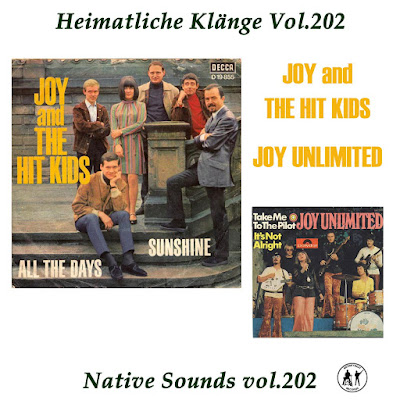 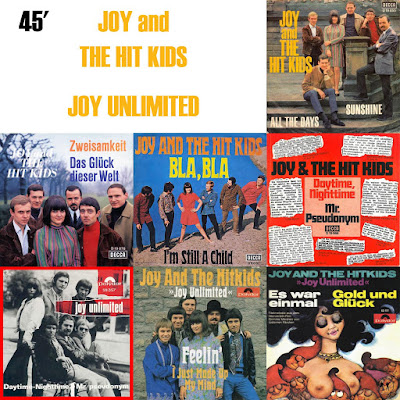 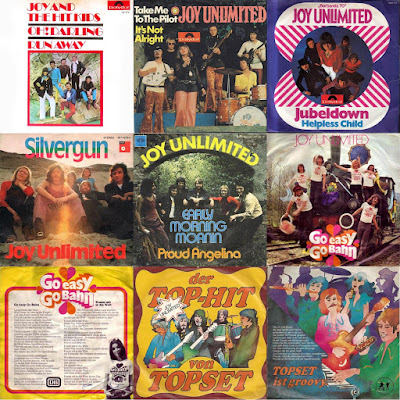 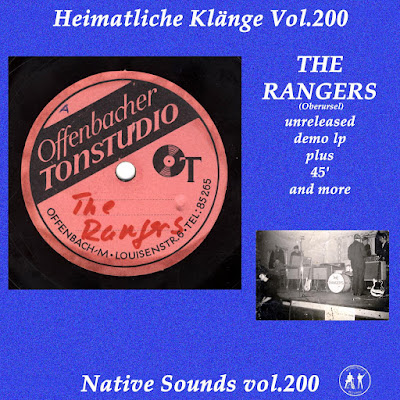 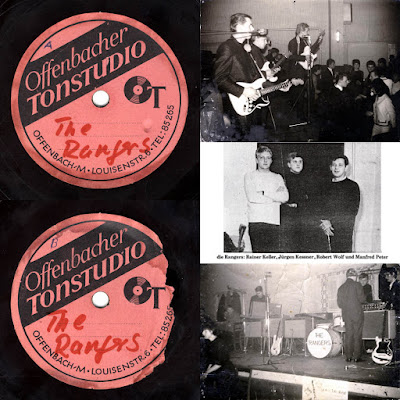 The Rangers
Sad Sack Set / The Trembles
Unfortunately, I couldn’t find anything about the group ... Besides, it’s a band of the Frankfurt scene
And that her member was Marek Lieberberg...German concert promoter, best known for founding and organising Rock am Ring and Rock im Park ... 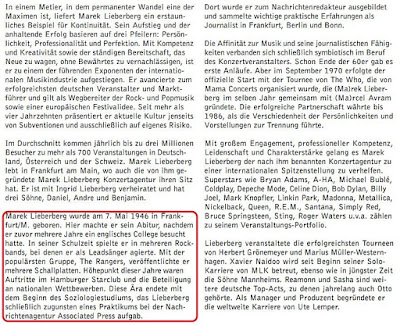 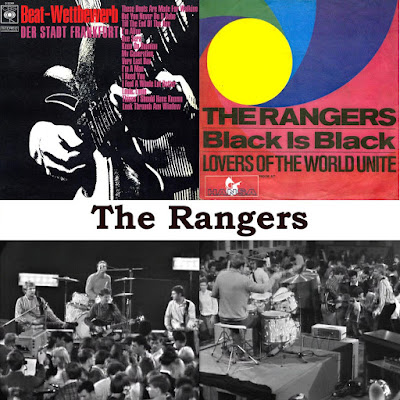 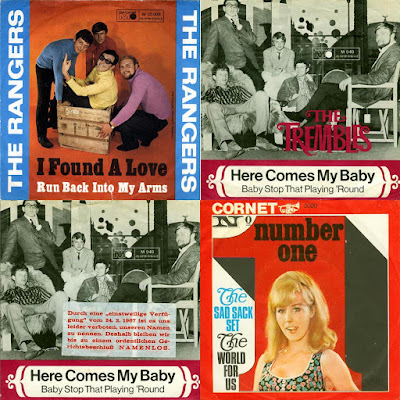 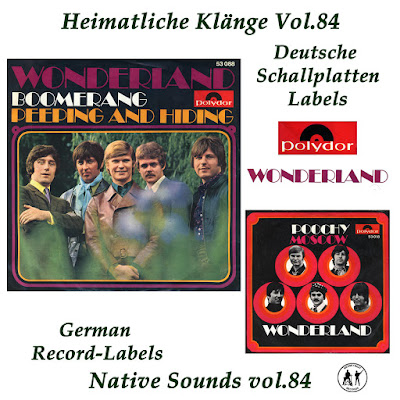 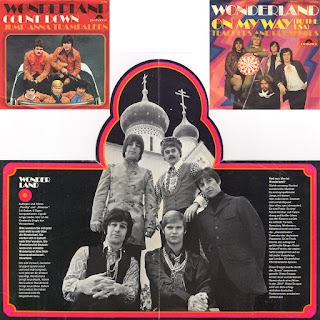 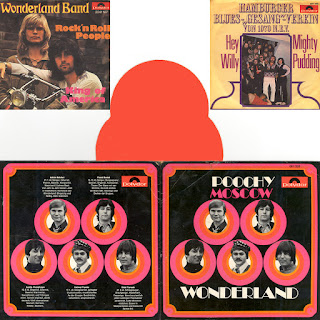 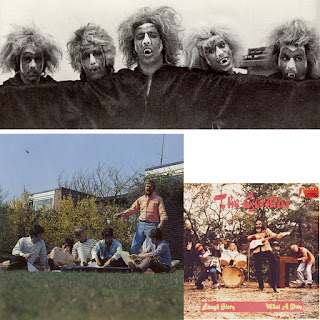