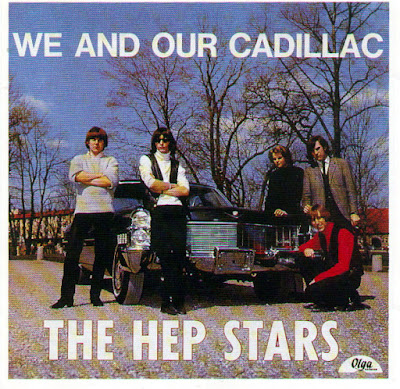 The chances are that, had ABBA never come along making Benny Andersson (and his three partners in the group) into an international pop/rock star, no one outside of Sweden would ever have heard of the Hep Stars. They were the hottest rock band of the mid-to late '60s in Sweden, however, considered by some to be that country's answer to the Beatles. The Hep Stars also charted 20 singles in their own country and had hits in the Netherlands, as well as building a following in Germany -- and their CDs are exported around the world as a result of the ABBA connection. It also turns out that they were a pretty good band, too.

Andersson's interest in the keyboard manifested itself at age six, when he got his first accordion, and he began playing with his father and grandfather. At 10, he got his first piano and started lessons, but these didn't continue, and he basically became a self-taught musician.

He was playing in a band in 1964 when he chanced to be heard by Svenne Hedlund, a member of the Hep Stars, who had been formed in 1963 and already recorded one single, but had also just lost their organist, Hasse Ostlund. Anderson joined the band in October of 1964 -- the lineup also featured Janne Frisk on guitar and vocals, Hedlund on lead vocals, Lelle Hegland on bass, and Christer Pettersson on drums. Soon after Andersson joined, the Hep Stars recorded four songs: Geoff Goddard's "Tribute to Buddy Holly," which had been a hit in England for Mike Berry in the early '60s; the Premiers' then-current hit "Farmer John," and "Cadillac" (not the Bo Diddley song), that helped transform their careers.

By the middle of 1965, after getting a break on Swedish television, "Tribute to Buddy Holly," "Farmer John," and "Cadillac" had each topped the Swedish radio charts. "Cadillac," "Farmer John," and a cover of Shel Talmy's "Bald Headed Woman" also reached number one on the sales charts, while "Tribute to Buddy Holly" got to number five, all in less than a year.

"Cadillac" was a good representative of the group's sound during this period, a piece of lusty, bluesy garage rock. dominated by an agonized lead vocal, somewhere between Gene Vincent at his most quiet and menacing and David Aguilar of the Chocolate Watchband doing his best anguished teen emoting, and some very prominent organ riffs by Andersson. The group sounded sort of like a Swedish Paul Revere & the Raiders with a little more lyricism than that comparison implies. Their version of "Farmer John" was a pale imitation of the Premiers' original, but it satisfied home-grown audiences. "Bald Headed Woman" was convincingly bluesy and threatening, and "Tribute to Buddy Holly" was a less dramatic rendition of the song than Mike Berry's version. They had a decent if slightly smooth garage band style, Andersson's organ and Frisk's guitar paired up very nicely on the breaks on numbers like "Should I," while Andersson's electric harpsichord was the dominant instrument on the folk-like "Young and Beautiful."

We and Our Cadillac Their initial string of hits resulted in the release of two LPs in 1965, We and Our Cadillac, and The Hep Stars on Stage. Additionally, Benny Andersson began writing songs that year -- up to that point, the band had done nothing but covers of songs by American and British composers (they did rocking versions of "What'd I Say" and other rock & roll standards on stage), but "No Response," Andersson's debut as a songwriter, made it to number two on the charts. A year later, his "Sunny Girl" got to number one, and his "Wedding," released that same year, also topped the charts. For the next three years, his originals would compete with outside material for space on the A-sides of single releases by the band.
The Hep Stars The group scored 20 hits in the Swedish Top Ten thru the summer of 1969, among them nine songs that topped the charts. They also released five more albums: The Hep Stars (1966), Jul Med Hep Stars (Christmas with the Hep Stars) (1967), Songs We Sang (1968), and Hep Stars Pa Svenska (1969). As those titles indicate, as the '60s progressed, the band began cutting their songs more and more often in Swedish, including covers of modern folk songs such as Ian Tyson's "Four Strong Winds" (done as "Mot Okant Land").
Shortly after hitting number one with "Wedding" in May of 1966, the Hep Stars were invited to a party by another popular Swedish group, the Hootenanny Singers. It was there that Andersson first met Bjorn Ulvaeus, who was a member of the other group. They began writing songs together later that year, with "It Isn't Easy to Say" -- that song, along with the Ulvaeus composition "No Time," showed up on the Hep Stars' self-titled third album, issued in December of that same year. At that time, their popularity was such that the album's sales broke all records, making it the first album by a Swedish band to reach the Top 20 album and singles charts.

Their string of hits continued with a Swedish version of "Last Night I Had the Strangest Dream," "Don't" (a cover of the Elvis Presley song), and Andersson's "Consolation." Everything seemed to be going extraordinarily well for the Hep Stars, but that all changed in 1967 when the band made a mistake astonishingly similar to one that the Beatles made that same year -- they decided to make a movie; additionally, the movie was to be financed by the band, and it had no script, which sounds a lot like The Magical Mystery Tour.

In contrast to the Beatles, who were earning enough money from record sales that they could've made two or three Magical Mystery Tours and not been seriously hurt, however, the Hep Stars were stricken financially by the project, which was never completed. The one bright spot in the entire debacle was the song "Malaika," which they found while shooting in Africa, and which reached number one.

The group kept working, oblivious to the hole they'd put themselves in until they were hit with a bill for back taxes that drove them into bankruptcy. They soldiered on, the members working off their debts, and in the summer of 1968, there was a lineup change when Svenne Hedlund's fiancee Charlotte "Lotta" Walker joined as lead singer. The hits kept coming, though from 1968 onward the Hep Stars were no longer recording much rock music, preferring a softer MOR and folk-based style.

It was this change that led to the group's split. Andersson and Svenne and Lotta Hedlund wanted to keep moving in an MOR direction, while the rest of the band preferred going back into the rock 'n roll music with which they'd started out. Andersson, Hedlund, and Walker exited the line-up following the band's 1969 summer tour. The seeds that would spawn ABBA were already planted by that time -- Andersson met Anni-Frid Lyngstad during the Hep Stars' final weeks of performing, and their engagement, and his involvement with her music as producer of her new single (co-written by Andersson and Ulvaeus), followed soon after the Hep Stars split.

In more recent years, the Hep Stars have appeared as a reunited band (sans Andersson), and have made a serious effort at recording as well as performing in Sweden, where their music is still remembered by older audiences from the '60s. ABBA's success has seen to their reissue on CD, as well as to the international availability of their music. 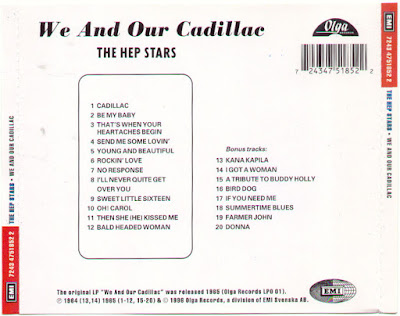 The debut LP by the Hep Stars is mostly made up of guileless and style-less rock & roll. The Hep Stars were like a lot of English bands of the period, rippling through the harder rock & roll numbers with thumping efficiency or aping the originals on songs like Carl Mann's "Rockin' Love" without any real feel for or comfort with the words. Parts of this album resemble English releases of the period, in the sense that the group is covering Phil Spector, Carl Mann, and Shel Talmy numbers in an earnest manner, but they lack the originality to pull off anything more than going through the motions. The best song here is the Swedish Top Ten single "Cadillac," a hot, bluesy organ-dominated number that might have passed for a Gene Vincent or Marty Wilde song. Otherwise, the group works best with melodic numbers that allow them music to hook their work around -- "Be My Baby" as a guitar-driven piece is passable, and it and the organ-dominated version of "And Then She Kissed Me" come off best; plus, they throw themselves into Neil Sedaka's "Oh! Carol" with compelling passion. "Bald Headed Woman" comes off surprisingly well also, mostly because it's similar in character to "Cadillac." "That's When Your Heartaches Begin" is pretty poor, apart from Benny Andersson's elegant piano playing, and little of the rest works better. The bonus tracks on the 1996 EMI reissue are mostly superior to the original LP's, apart from their debut single (a piece of pathetic Euro-pop/rock called "Kana Kapila"), "I Got a Woman," "Tribute to Buddy Holly," "Summertime Blues," and "Farmer John" are all worth hearing.