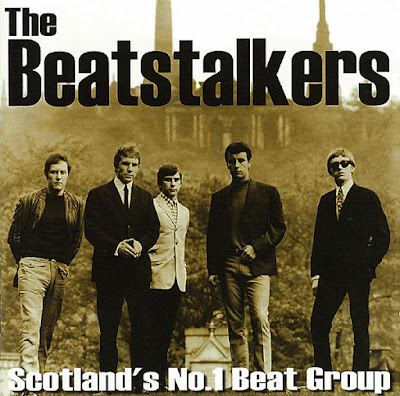 The Beatstalkers was a Glasgow beat group of the late 1960s. The Beatstalkers were sometimes billed as "the Scottish Beatles", and like other Scottish beat groups The Poets, The Athenians and The Pathfinders, specialised in covers of US hits.
In 1962 Alan Mair and Eddie Campbell formed the Glasgow band with a lineup included Davie Lennox on vocals, Eddie Campbell on guitar, Alan Mair on bass and ‘Tudge’ Williamson on drums (replaced by Jeff Allen). Later Ronnie Smith joined the group on rhythm guitar.Under the management of Joe Gaffney, the band went on to become Scotland's "top group" at the time.
The group came to the attention of Decca Records in London after a near riot at a free concert in George Square, Glasgow.[5] However the band were unable to translate success in Scotland into success in England.They decided to split in 1969 after their van was stolen with all their equipment in it.
Alan Mair went on to play with The Only Ones and drummer Jeff Allen played with East of Eden. The Beatstalkers played a reunion concert On 23 December 2005 in Glasgow. 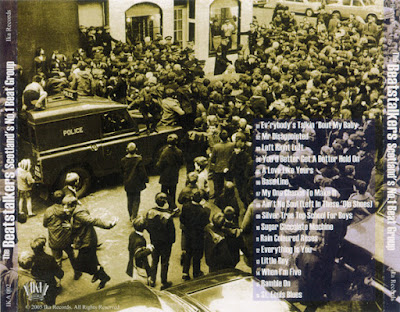 Clasgoyv born Tommy Scott started his show business career in 1960 with the Andy Stewart Show. He has also appeared in cabaret in France, Germany and Manchester before coming to London, as well as variety in-Scotland and Ireland. He has since earned attention as a very þromising vocaI talent and has also emerged as a hit songwriter. He collaborated with American songwriter Buddy Kaye on Eden Kane's hit Boys Cry. This versatile young man now turns his attention to another me'tier that of the instrumentalist.
01 - Twist And Shout
02 -  A Hard Day's Night
03 - Can't Buy Me Love
04 - From Me To You
05 - Love Me Do
06 - Please Please Me
07 - I Want To Hold Your Hand
08 - She Loves You
09 - Things We Said Today
10 - All My Loving
11 - I Should Have Known Better
12 - Misery
13 - Do You Want To Know A Secret
14 - I Saw Her Standing There 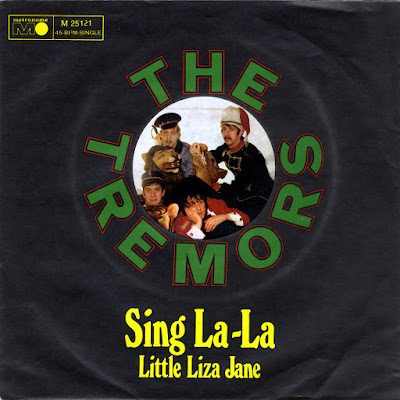 THE TREMORS came from Scotland to Hamburg and stayed in Germany from `64 to `72. They were great on stage, but their records - an LP for Elite Special and two singles for Metronome and Fontana - are best forgotten. The Tremors´ best documented work has been spread over three LP- compilations released by Polydor in´64 and ´65. On "Beat City" we´ve found an arrangement of Jimmy Reed´s "Shame, Shame, Shame" that´s remarkably different from the better known, tough R&B-versions by The Rattles and The Shamrocks. Bandleader Mike Reoch managed to keep the group together and changed the name to Light Of Darkness in `70. The group´s eponymous album for Philips (1970) nowadays is regarded as a Krautrock classic.
Mike Reoch, along with school friend Byron Grant, journeyed from Brechin to Germany with their band in the 1960's, where they have remained, living in Hamburg since 1964.
Some locals may recall Mike's father used to own the grocers shop where the Victoria and Albert Bar now stands in Montrose Street, and Byron's mother was the owner of the Savoy in Market Street.
"We came to Germany as musicians with a band called 'The Original Tremors' which was half Aberdonian and half Brechin," said Mike.
"We made an LP in Hamburg in 1971 under a different band name and wrote the songs ourselves. Just a little while ago we received notification from a music publishing company that two of our songs have appeared in a German movie which was released recently."
The film Requiem premiered to great acclaim at the 2006 Berlin International Film Festival, as well as garnering ten nominations for the German Film Awards, or Lola's.
"We found out the leading lady in the movie, Sandra Muller, won Best Actress at the German Film Festival," added Mike.
The fact-based story is about an emotionally troubled young women who undergoes an exorcism after seeking help from a Catholic priest.
After debuting in Berlin, Requiem looks set to generate plenty of theatrical, television and video interest in Europe.
After 42 years the band is still going strong all be it with some line-up changes.
"The two Aberdonians left the band in 1966," continued Mike.
"Now the members are Byron on lead guitar, myself on bass guitar, John Law of Bellshill guitar/lead singer and Manfred Bebert, a German national, on drums.
"We still call our band The Tremors but the addition being John Law thus we're now John Law and the Tremors."
Due to this recent good fortune Mike has also been making headlines in Germany.
"Since 1999 I have been driving a taxi in Hamburg as we can't make a living from the band any more, all of us being over 60," he continued.
"One day, after chatting to someone in the cab, I received a phone call asking for an interview with a German national paper, the article was titled, The comeback of a taxi driver!" 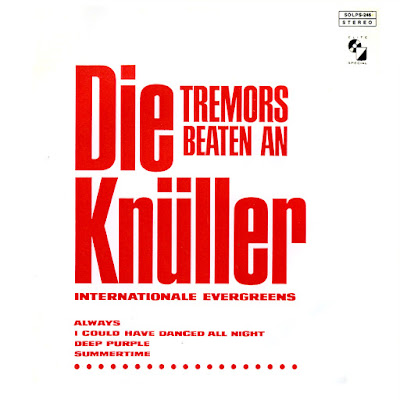 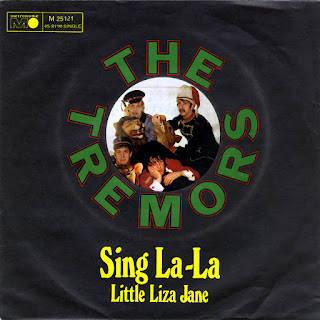 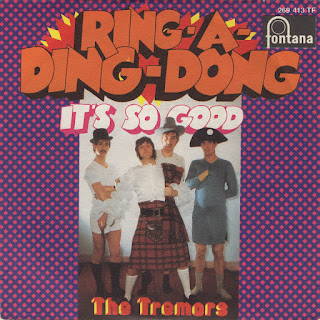 Davie Lennox - vocals
Eddie Campbell - guitar, organ
Ronnie Smith - guitar and vocals
Alan Mair - bass
'Tudge' Williamson - drums
Jeff Allen - drums (from late '60s)
*******
Formed in 1962, a Glasgow R'n'B band managed by Joe Gaffney, they were sometimes referred to as The Scottish Beatles in their early days, although when they signed to Decca in 1965, they moved down to London. In their early days their live repertoire was drawn from originals, black America and less well known Rolling Stones cuts. They had a mod image and built up a very loyal audience around Glasgow before moving South.
1967 saw a label change to CBS and a new line-up. In their later days they were managed by Kenneth Pitt who also looked after David Bowie's affairs. At Pitt's suggestion they recorded some of Bowie's songs:- 'Silver Treetop School For Boys', 'Everything Is You' and 'When I'm Five'. They had a residency at London's legendary Marquee, appeared on TV show Ready, Steady, Go with the Who and once, during a lunchtime show in June 1965 in George Square, the teenage audience was whipped into such a frenzy a riot ensued, followed by accusations that it was somehow staged.
After attempting three songs, they had to leave the stage as mounted Police rescued some distressed fans from potential crushing injuries while the band escaped through the city chambers. The commotion was widely reported across the Scottish press.
Poor record company representation from Decca and the fact that huge record sales (50,000 in a month) went unrecorded outside of the only two shops in Scotland whose sales were counted, contributed to their demise. A planned live album from Glasgow never emerged either.
By 1969 the band were in terminal decline and when their van was stolen with all their equipment in it they packed it in. Eddie Campbell was later in Tear Gas and Jeff Allen went on to play for Dr. K's Blues Band and then East Of Eden (he also did a John Peel session with Blue). Lennox was a member of The Joe O'Donnell Band in 1978.
In the late 1960's and early 1970s Alan Mair ran a boutique in Kensington market selling hand made clothes and especially shoes & boots. Everybody bought them. Platforms, stacked heels, fancy patterns and colours. Freddie Mercury was a sales assistant until Queen started to break big. In the late '70's early '80s Alan played in the magnificent 'Only Ones' - of 'Another girl Another planet' fame etc.
The band released seven singles in their career.
'Everybody's Talking 'Bout My Baby' / 'Mr. Disappointed' (1965)'Left Right Left' / 'You'd Better Get A Better Hold On' (1966)'A Love Like Yours' / 'Base Line' (1966)'My One Chance To Make It' / 'Ain't Got No Soul (Left In These Old Shoes)' (1967)'Silver Treetop School For Boys' / Sugar Chocolate Machine' (1967)'Rain Coloured Roses' / 'Everything Is For You' (1967)'When I'm Five' / 'Little Boy' (1969)

In 2005 they released a 'Best-Of' CD and calls for live performances soon followed. They then reformed and played The Barrowland Ballroom Glasgow on December 23rd after more than thirty years! A DVD of the performance is now available.