Ronnie Hawkins And The Hawks - The Roulette Years 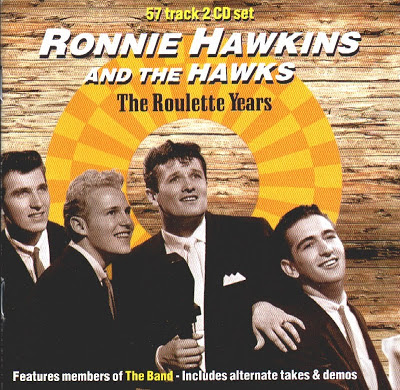 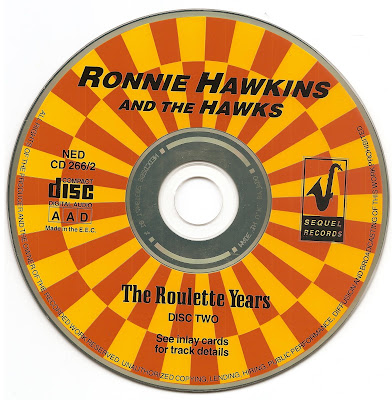 This 57-track double-CD set seems like a no-brainer -- get almost all of Ronnie Hawkins' rock & roll recordings in one place. The packaging here is good, thoughtful, and legitimate, but could also be a little misleading to those who are buying this expecting to hear a lot of early work by the musicians who later became the Band -- Levon Helm was aboard on drums from the Hawks' first official recordings, but the remainder didn't begin arriving on the scene until almost two years later; they're only on hand more than one or two at a time for less than half of what's here.
Additionally, taken on its own terms, this is about as solid a rock & roll collection by a single white artist from this period as you're going to find -- in 1959-1960, as Elvis Presley, et al. were generally softening their sounds, Ronnie Hawkins was staying a true rock & roller. The alternate takes and demos featured here are about as worthwhile as any of Hawkins' hits, and the quality of everything about this set makes it practically scream to be purchased -- the detailed notes, the complete sessionography, the bright, clean yet raunchy sound on the masters. A straight, enjoyable (and probably revelatory to some) rock & roll document, Sequel deserves an award for this release -- only Bear Family does it better, and this is a lot cheaper than one of their double CDs. 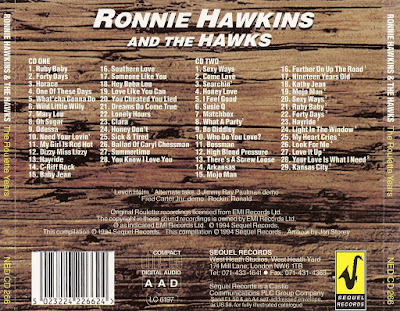