"You are invisible as an old person. It helps to accept that. I like to be invisible."

Published:
"I was in India with my son and some friends, about seven years ago. And I was often alone in the dining room, since my son and the others would go off. And there was a loneliness that was interesting to me. People didn’t strike up conversations with you. Or they try to flee. Maybe they think you’ll latch on to them and bore them. I think the old woman sitting alone at the restaurant or the cafe table is in some sort of strange bubble of her own. Invisibility is a form of freedom that I do cherish most of the time."

Said Judith Thuman, quoted in "Fluent in the Language of Style/For over three decades, Judith Thurman has captured the often ineffable pull of fashion and beauty like few others" by Rhonda Garelick (NYT).

Thurman takes a different position when talking about invisibility caused by a woman's overweight: "I think empowered women of whatever shape don’t want to be excluded, condescended to, ashamed. Or made invisible. Women accepted their invisibility passively or with despair or stoically or ironically, and now they don’t."

"You describe growing up under Soviet occupation, being trained to revere the Soviets, rat out your neighbors, to obey."

Published:
"It was indoctrinated into you to obey and revere an occupier. And this, you say in the essay’s conclusion, familiarized you with being controlled, with being with someone controlling. 'My marriage was a sort of occupation,' you write. Looking at what’s happening in our country and around the world, do you think about the connection between shame and defensiveness and occupation and politics?"

That's a question the NYT interviewer, Rhonda Garelick, asks Paulina Porizkova in "Paulina Porizkova Doesn’t Call Her Book a Memoir/The model and author spoke about writing 'No Filter: The Good, the Bad and the Beautiful.'"

That question was absurdly difficult! And Porizkova doesn't really try to answer it.

Garelick persists: "But you made that political connection in your essay — between the occupying army and Ric."

Fair enough. Porizkova blows it all off. She was jet lagged and under time pressure when she wrote that — "My marriage was a sort of occupation."

Either say it and defend it or don't speak. The dead Ocasek cannot speak. Or do beautiful women have a special privilege to make aggressive analogies?

Published:
"[Cassidy Hutchinson] wore minimally visible makeup — what appeared to be light bronzer, but no discernible colors of lipstick or eye shadow.... Social media teems with thousands of tutorials on 'reshaping one’s face' with contouring makeup, how to make eyes look bigger, noses smaller, skin smoother. The overall messages are clear but contradictory: 'become an artist of the self,' 'make yourself beautiful' and 'do it imperceptibly.' It’s a tall order — time-consuming, hard to ignore and subject to wide interpretation. And it’s especially hard for women in politics.... Many of the (often young and attractive) women of the Trump administration favored an overt, high-glam style, and we saw a lot of very long hair, dramatic false eyelashes, sheath dresses and stiletto pumps — a 'beauty pageant' vibe said to be favored by the former president.... At the hearing, Ms. Hutchinson’s image was distinctly different from that aesthetic. She dressed as if ready to blend into the corridors of power, to do her job, to convey depth over surface (although she was noticeably telegenic)..... And the nation is unlikely to forget the day Cassidy Hutchinson, with her precise, low-key style, told her disturbing story."
From "Muted Tones Spoke Loud and Clear/At a surprise session of the Jan. 6 hearings, Cassidy Hutchinson calibrated her appearance to keep us listening" by Rhonda Garelick (NYT).
I'm laughing at the happenstance of seeing "surprise" again so soon after going on about the tedium of surprise. But I'm blogging this piece because I'd blogged, just yesterday, about Cassidy Hutchinson's makeup: She seems to be wearing dark foundation on her face that doesn't match her skin tone. I'm saying that based on the light pink color of her hand, which we keep seeing held up next to her face, because that's the appropriately evocative taking-the-oath position.
But the Times writer, Garelick, is eager to extol the neutrality of Cassidy's look. It bolsters her credibility, and that's why it's the longstanding and obvious advice given to witnesses. But come on. I have a problem with Garelick's credibility. She describes the foundation as "what appeared to be light bronzer." But the photograph accompanying that text makes my point quite clearly: 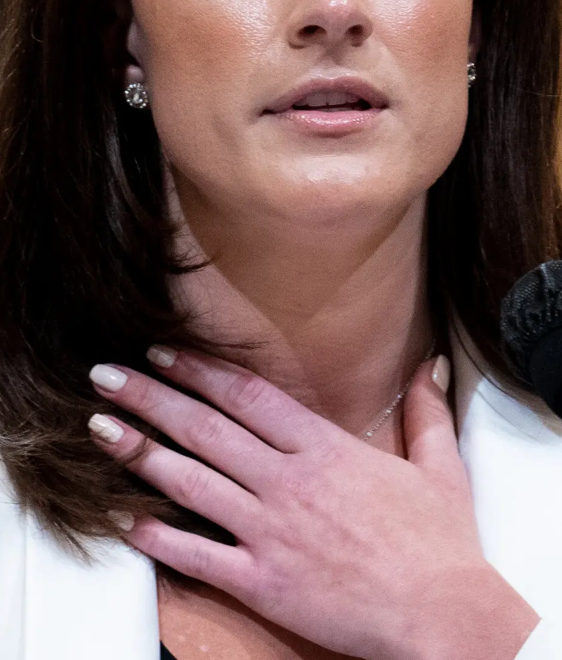 I don't know what women hope to achieve by slathering on nonmatching foundation. Are they influenced by the bad makeup they see in social media? Well, Trump does the same thing! Part of the problem is just not bothering to put makeup on one's hands and only caring about the face (and maybe the neck). So the hands are there to tell the tale. The real question is why do people think their face needs to be a different color? Is it a fear of looking "washed out" or sickly or weak (indoorsy)?
It's not just tone (dark/light). It's also hue — that is, the place on the color wheel. In those little pictures, you can see that both Trump and Hutchinson have a natural pink hue and they seem to be using makeup (or tanner) to move away from it. Trump famously lunges toward orange. Hutchinson going for something more neutral that most of us would call brown, but we might say olive. What is this rejection of pink? Too feminine? Weak? What is the problem to be solved with the expungement of pink?
There's a word for the fear of pink: Rhodophobia.
Source: althouse.blogspot.com
61 Comments+ Sharelabels (7)Flag
AllCassidy HutchinsonRhonda Garelickbrownnesslight and shademakeuporangepink

"According to Ms. Evangelista’s lawsuit... those stubborn fat deposits that balloon beneath their skin do not look like normal flesh."

Published:
"Instead, they resemble longish, solid rectangular bars — which in fact, reproduce perfectly the shape of the hand-held CoolSculpting wand, the device that is passed over the flesh to 'freeze' the fat. In other words, in cases of [paradoxical adipose hyperplasia], the body permanently takes on the precise contours of the tool used to reshape it. The body has literally, visually, internalized the weapon that deformed it and conformed to that weapon. In Ms. Evangelista’s case, she says her body created a permanent, visible record of what it — and she — were supposed to conceal."
From "The Cruel Paradox of Linda Evangelista’s Fate/A world obsessed with women’s hyper-visibility can dispatch them so swiftly to invisibility" (NYT).
The NYT writer, Rhonda Garelick, works hard at portraying Evangelista's medical problem as a Greek tragedy. Evangelista, I would say, was the most beautiful model of her time. She could have been satisfied with her glory and resisted all treatments, not deigned to allow anything as gross as a CoolSculpting wand to come anywhere near her perfect — or erstwhile perfect — self.
I don't think Garelick pulls off the Greek tragedy comparison, because look how she's blaming the world — a world obsessed with women’s hyper-visibility has dispatched her so swiftly to invisibility.
No, no, if this is to be a Greek tragedy, it's Linda's fault!
But this is to be a NYT article, so the woman can't be to blame. She's a victim of the culture. Ordinariness.
Source: althouse.blogspot.com
19 Comments+ Sharelabels (8)Flag
AllLinda EvangelistaRhonda Garelickfatfeminine beautylawparadoxseen and unseentheater

"Melania’s lengthy disappearance was more a matter of degree than of kind. She has always been missing, in an existential way...."

Published:
"What’s more, the fact that the mystery was medical only amplified the usual effect: To wonder what was wrong with the First Lady’s health is to think about her internal body, her interiority. Medical matters force us to think about people’s inner human functioning. By denying us even the most minimally plausible account of the First Lady’s illness and treatment, the Trump administration denied us her physical reality, confirming instead her status as pure surface, a two-dimensional being, devoid of flesh and blood — not unlike the projected shadows and light of which film heroines are made. In her immateriality, Melania well represents the status of women under Trump — absent, frozen out, erased from the picture. This applies of course not only to those women within the administration, but to the way women in general are perceived: As inessential blank spaces, their humanity and concerns easily erased."

From "Melania’s Recent Behavior Is Right Out of Hitchcock The lady vanishes" by Rhonda Garelick (The Cut). Garelick is an English professor, and she is representing the status of women within English departments — present, heated up, inscribed.
Source: althouse.blogspot.com
80 Comments+ Sharelabels (4)Flag
AllHitchcockMelaniaRhonda Garelickgender politics