"But I’m also getting more obsessive about human beings over huge swaths of time. Part of that came out of being on the Isle of Skye..."

Published:
"... during the serious U.K. lockdown. On Skye, if there’s a rock somewhere, it’s probably because somebody put it there. I realized that the rock that I was using to keep the lid on my dustbin was a stone that had been dragged around. People have been in this place for thousands and thousands of years, and in this bay I’m living in, they’ve left behind rocks!"

Realizing that about the rocks makes you take the long view. Which is that the human race is mostly people just trying to live their lives, and that bad [expletive] is going to happen. That then moves you into other territory. Which is what? The territory of Rudyard Kipling, a very unfashionable writer.

The British writer, born in 1865 and perhaps best remembered for “The Jungle Book,” has been criticized for, among other things, espousing racism and colonialism. An incredibly good writer, not always somebody I agree with, but thank God I’m allowed to read him.

He wrote a poem called “Natural Theology,” which begins, “I ate my fill of a whale that died/And stranded after a month at sea/There is a pain in my inside/Why have the Gods afflicted me?” Then a verse goes, “My privy and well drain into each other/After the custom of Christendie …/Fevers and fluxes are wasting my mother/Why has the Lord afflicted me?” And after several more verses, it goes, “We had a kettle, we let it leak/Our not repairing it made it worse/We haven’t had any tea for a week …/The bottom is out of the universe!”

That poem is Kipling going, We blame the gods — the stories — for the [expletive] that we do, and we don’t always understand it. I would love to think that we are living in a world in which the story of progress, as in the original “Star Trek” series, is always upwards and onwards, and even if there will be mad times, eventually we get to the bridge of the Enterprise where all the problems of Earth have been sorted out. But I don’t know that we ever will. We are humans, and we do collective insanity really well.

6 TikToks for you tonight. Let me know what you like best.

1. People in 5 different countries show what they would make with an orange.

2. How well could you do if you had to adapt to walking on all fours?

3. Hiking from one coast of Scotland to the other.

5. What it's like being one of the infinite monkeys who will eventually type the complete works of Shakespeare.

6. The history of Roland the Farter.

I've selected 8 TikToks for you tonight. Let me know what you liked best.

2. Rooster crowing in slow motion must be the sound the dinosaurs made.

5. The most beautiful landscape in Scotland?

"Scotland goes to the polls Thursday in a vote that could eventually lead to a truly historic event: the crackup of the United Kingdom."

"The independence movement has gained momentum in the wake of Prime Minister Boris Johnson’s Brexit. And the pandemic has further encouraged the idea that Scotland might be better off going its own way, with policies determined in Edinburgh viewed more favorably by Scots than those pronounced at Westminster. As a result, the Scottish National Party, led by the popular First Minister of Scotland, Nicola Sturgeon, 50, is expected to perform well in Thursday’s vote for seats in the regional Parliament, with pro-independence parties winning a solid majority of the 129 seats in Holyrood. The talk shows, political magazines and news columns in Britain are full of speculation about a looming breakup...."

"In Scottish custom, Unspoken Water was water believed to have healing properties when collected 'from under a bridge, over which the living pass and the dead are carried...'"

Published:
"'... brought in the dawn or twilight to the house of a sick person, without the bearer’s speaking, either in going or returning.'... The custom is long obsolete. The 1901 The Book of Saint Fittick by Thomas White Ogilvie contains an elderly woman's account of being 'the last wife in Torry to cure a bairn wi' unspoken water ... comin' or gaun I spak' tae naebody — for that's what mak's unspoken water.'"
From "Unspoken Water," Wikipedia, clicked on from "Religion and Water," Wikipedia, which I was reading to pursue some ideas that occurred to me as I was listening to the song "Drifting Too Far From the Shore," which Meade has been playing — in various versions — all morning. (The Dylan song with virtually the same title is different, but influenced by this old song.)
The Scottish meaning of "unspoken" is "Without having spoken" — according to the OED, which quotes an 1825 Scottish dictionary: "Unspoken water, water..brought..to the house of a sick person, without the bearer's speaking either in going or returning."
Source: althouse.blogspot.com
35 Comments+ Sharelabels (5)Flag
AllDylanScotlandreligionsuperstitionwater

Published:
"Drilled in loyalty to the great leader, the boy told the authorities. Days later she was executed by firing squad. Zhang remains distraught. 'I killed my mother. I am tormented by this.' A tragedy so far from our experience: state spies in the home; blood betrayed for the regime. And yet, extraordinarily, we may ourselves be heading to a future in which children could snitch on their parents for expressing the wrong opinions. Last week Humza Yousaf, the Scottish justice secretary, talked about changes he wishes to make to hate crime legislation.... The Hate Crime and Public Order (Scotland) Bill will introduce an offence of 'stirring up hatred' against people with protected characteristics, including disability, age and sexual orientation.... Yousaf believes that this law should apply not only in public places but in private dwellings.... An Englishman’s home is his castle, a Scotsman’s home may soon be a sieve with forbidden conversations leaking out to the rozzers.... [A] fervently 'progressive' new son-in-law comes over to spend his first Christmas Day with the family, only to be appalled by batty aunt Doris with her tutting about 'coloured' people and her wondering aloud whether long hair on a young man automatically signifies that he is gay these days...."
From "Hate crime law is an attack on our liberties/Scottish minister’s plan to criminalise ‘offensive’ remarks made in private homes is a foolish way to promote tolerance" by Clare Foges (London Times).
I learned a new word there. "Rozzers." Cops.
Source: althouse.blogspot.com
59 Comments+ Sharelabels (5)Flag
AllChinaScotlandcrimedeath penaltyfree speech

"Our nation today mourns one of her best loved sons. Sean was born into a working class Edinburgh family..."

Published:
"... and through talent and sheer hard work, became an international film icon and one of the world's most accomplished actors. Sean will be remembered best as James Bond - the classic 007 - but his roles were many and varied. He was a global legend but, first and foremost, a patriotic and proud Scot - his towering presence at the opening of the Scottish Parliament in 1999 showed his love for the country of his birth. Sean was a lifelong advocate of an independent Scotland and those of us who share that belief owe him a great debt of gratitude."
Said Scotland's First Minister Nicola Sturgeon, quoted in BBC.
Goodbye to Sean Connery.
"Too bad you had to go — just as things were getting interesting."
ADDED: There have been 25 James Bond movies. I have seen 5 of them: "Dr. No" (1962), "From Russia with Love" (1963), "Goldfinger (1964), Thunderball" (1965), and "Diamonds Are Forever" (1971).
There are 2 is one other Bond movies with Sean Connery — "You Only Live Twice" (1967) and "On Her Majesty's Secret Service" (1969). The rest don't have Sean Connery. I've never gone to the movies to see a James Bond that was not Sean Connery. I realize there've been a lot of other James Bonds, but they have no meaning at all to me.
What a big deal "Goldfinger" was in 1964 — the same year that brought us The Beatles. I was 13, and it seemed that the culture was going to serve us up endless amazing delights. Now, I'm nearly 70, and it doesn't feel like that at all.
Why did I see "Diamonds Are Forever" in 1971 when I'd skipped "You Only Live Twice" and "On Her Majesty's Secret Service"? Because we went as a joke. We went to laugh at James Bond as an absurd remnant of the past.
He was in many other movies, but the only one I saw was "Marnie."
AND: From 1953 (when he competed in bodybuilding contests): 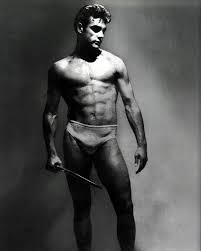 "I spent a great deal of time as a child on a tiny, uninhabited island off the west coast of Scotland. The island had no roads, houses or electricity..."

Published:
"... just a storm-blown, windy wilderness of sea birds and heather. My family and I would be dropped off like castaways on the island by a local boatman for the summer holidays and picked up again weeks later. While we were staying on the island, we had no way of contacting the outside world. Because there wasn’t any electricity, the house was lit by candlelight.... In the evenings, my father told me and my siblings tales of the Vikings who invaded the island 1,200 years before, of the quarrelsome ancient British tribes who fought each other and of dragons who were supposed to live in the caves in the cliffs of the island. That was when I first started writing stories about dragons and Vikings, way back when I was nine years old, by candlelight on that little island. These were the stories that later turned into 'How to Train Your Dragon.'"

From "To Save the Earth, We Should Teach Children the Magic of Nature/We must give children the opportunity to interact with the wilderness, so that they learn to preserve the natural world" by Cressida Cowell (NYT).
Source: althouse.blogspot.com
82 Comments+ Sharelabels (3)Flag
AllScotlandchildrenwriting

"Much better article than reading about Trump."

Published:
That's the top-rated comment — by far — on the NYT article, "'Dog Suicide Bridge': Why Do So Many Pets Keep Leaping Into a Scottish Gorge?"

From the article: "The bridge’s location, hushed, lush and sometimes still, fits the description of what the pagan Celts called a 'thin place,' a mesmerizing spot where heaven and earth overlap. 'People in Dumbarton are very superstitious,' said Alastair Dutton, a local taxi driver. 'We grew up playing in the Overtoun grounds, and we believe in ghosts here because we’ve all seen or felt spirits up here.'"

Consider that the NYT news about Trump also feeds our hunger for stories about the supernatural. It was a "witch hunt." Dogs in Scotland are jumping off a bridge because of a ghost — "The White Lady of Overtoun." We like getting caught up in that sort of thing — like it, though we feel we loathe it. That's the way we are. Oh, not you, dear reader. You are above that sort of thing. No ghosts, no witches. Carry on.
Source: althouse.blogspot.com
30 Comments+ Sharelabels (5)Flag
AllScotlandTrump derangement syndromedogsghostsuperstition

"The president and first lady appeared not to have followed long-running protocol in which a bow or curtsy is customary."