"For more than 1,000 nights, Isaac Ortman, 14, has slept beneath the stars in his backyard in Duluth, Minn., including on a night when the temperature dipped to minus-38 degrees."

Published:
"What started as a whimsical self-challenge... is now a nightly routine.... [He] even insisted on sleeping outside after he broke his left wrist in an accident at home this month. 'We came home from the emergency room, and I went back outside like I always do,' Isaac said. 'It’s like the time we saw a bear walk up to our patio door. Thirty minutes later, I was brushing my teeth and getting ready to go to sleep outside.'....  His dad [said] 'He found a waterproof hammock to string up in the yard, and he has a couple of sleeping bags, under-quilts and over-quilts that he can add depending on how cold it is.'... Isaac said [he has] an insulated hood.... 'It goes over my entire face and cinches up so just my nostrils are out.... Even in the cold, I sleep just fine....' ... [H]e prefers snow, rain and wind to the heat and humidity of the summer. 'Unless it’s below zero, I like to stick one of my legs out at night, so I don’t get too hot,' he said. 'If you’re cold, you can always put on layers. But in the summer, there’s only so much you can take off. You get all sweaty, plus there are mosquitoes'...."
From "Minnesota teen has slept in his backyard for nearly 3 years just for fun/'I guess a lot of people might find it a little unusual, but to us, it’s now the normal routine,' said Andrew Ortman, the teen’s father" (WaPo).
Lots of themes here, but there are 2 that I personally identify with:
1. Finding something you like and doing it repeatedly — a positive ritual. I blog every day and also have a ritual — though not every single day — of going out to the same place every day at sunrise. I find this immensely satisfying.
2. The weather will sometimes challenge us, but I agree that the challenge at the cold end of the scale is better than the challenge at the hot end. Sure, the cold has more power to kill you, but there are outward things you can do! Bundle up.
Source: althouse.blogspot.com
37 Comments+ Sharelabels (7)Flag
Allbearscampingcoldhotnessmosquitoessleepteenagers

"The National Park Service is moving to prohibit hunters on some public lands in Alaska from baiting black bears with doughnuts and using spotlights..."

"... to shoot hibernating bears and cubs in their dens, techniques allowed by the Trump administration but considered inhumane by conservationists. A rule proposed by the National Park Service on Friday would essentially restore restrictions that existed during the Obama administration but were gutted under President Donald J. Trump. Under the new policy, hunters on Alaska wildlife preserves would also no longer be able to kill adult wolves and pups in their dens, or use motorboats to shoot swimming caribou.... Sara Amundson, president of the Humane Society Legislative Fund, issued a statement calling the new rule 'a victory for Alaska’s iconic wildlife species. Baiting bears just to blast them over a pile of doughnuts is just wrong'...."

From "Biden Moves to End Doughnut Lures and Other Bear Hunting Tactics in Alaska/A new rule proposed by the administration would also bar hunters from invading wolf dens to kill pups" (NYT).

I found this article confusing. Is there a policy to thin the number of bears, wolves, and caribou? Are we just talking about the method of killing? If so, the cruelty should be judged from the perspective of the animal, not the human being. This concentration on the meaning of doughnuts seems entirely human-centered. Is there some idea of giving the animal a fighting chance? That's the perspective of a human sports spectator. From the animal's perspective, there's drawn-out fear and pain. The government's position is sentimental and unscientific (as far as I can tell from this article).

"People are awful; these beautiful creatures have a right to thrive in their habitats. Seriously, the planet didn’t need 8 billion people."

Published:
"It’s not like a high percentage of them especially in the US are smart, compassionate and empathetic."

That's one of the most recommended comments at "What Should You Do When the Bear Is Cinnamon? Scientists have uncovered a genetic mutation that makes it dangerously difficult to distinguish a black bear from a grizzly" (NYT).

Should you watch the monotonous 3+ hour 1975 feminist movie that hit #1 on the Sight & Sound poll or is it cinema enough to watch the 2-minute trailer for "Cocaine Bear"?

Everyone seems to be watching the "Cocaine Bear" trailer. I haven't felt this cultural vibe since the "Snakes on a Plane" trailer came out in 2006.

For those who doubt the "based on a true story" assertion, the NYT has "Yes, ‘Cocaine Bear’ Was Real. Here’s the Back Story. Nearly 40 years after a 175-pound black bear found and ingested cocaine in a Georgia forest, the drug binge has inspired a movie."

The movie does add some things. Here's the barebones original story: 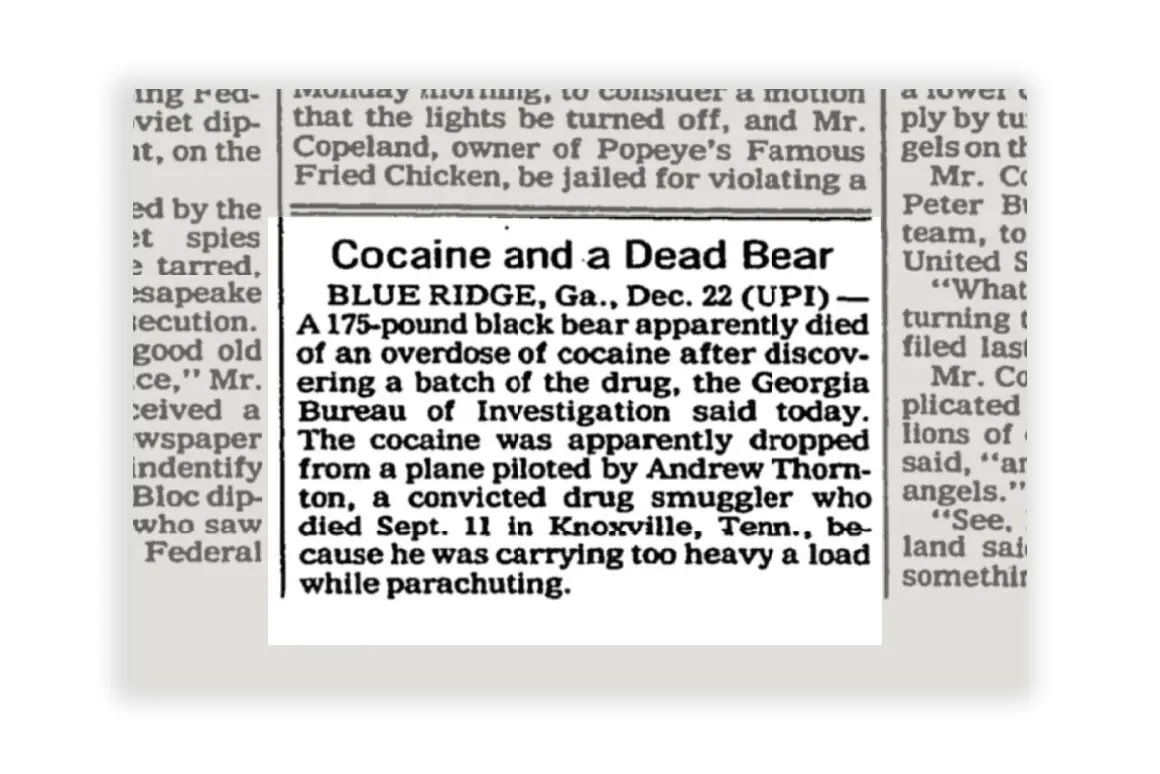 The movie promoted the hype more than the hype promoted the movie. Is this the way things will be in the future, with "instant, mutable, unmoored" doings on the web taking the place of thought-out cultural productions like movies? I wonder.

There's something about getting absorbed into the web that changes the whole structure of your mind, I think. (And I acknowledge the theory out there -- I read it on the web! -- that, in my personal case, I'm simply crazy. So don't go by just me.) I have lost all taste for things that are planned out and long. I no longer want to sit through anything. Once there's a script that's going to be followed, I'm looking around for something to click to see what else is happening.

Ha ha. That was 16 years ago. After 16 more years, how much more instant, mutable, unmoored are we?

"When he saw the [grizzly] bear mauling his friend, [Kendell] Cummings first tried shouting to scare it away. Then he threw stones and rocks in the grizzly’s direction."

Published:
"The scare tactics were not enough. That is when the young wrestler acted on instinct. He leaped in and grabbed the bear, distracting it enough to free Lowry, Cummings said. Then the bear charged Cummings, twice.... Cummings had previously read about what to do in a bear attack, but none of that information had been about grizzly bears. 'In any case, there wasn’t time to think,' he said. Cummings played dead. 'I remember curling up,' he said. According to the National Park Service, it’s best to play dead during a grizzly bear attack, covering your head and neck with your hands and arms, remaining quiet, and lying flat on your stomach. What felt like moments later, Cummings watched the bear walk away....'Before this attack, I had thought that I could take on a bear easily,' Cummings said. 'Now I know that a bear is pretty legit. They are tougher, stronger and bigger than I thought. It’s not so easy.'"

From "A college wrestler fought a bear to save his teammate — and won" (WaPo).

A bear is pretty legit... It's not so easy.... very funny. Nice survival by the wrestler.

I've picked out 8 TikToks for you. Let me know what you like.

1. When you fall asleep at a classical music concert.

2. Are we going to be impressed by this guy's construction out of chocolate?

4. Dogs at the meeting about all the barking.

5. Remember that little boy with the corn I showed you on August 5th? Now, here he is, with musical accompaniment.

6. Why do you call when you can text?

7. The snowboarding toddler is just floating.

Just 4 TikToks tonight. Let me know what you like best.

2. Confronted by bears, this worked.

Published:
1. There are 24,000 bears in Wisconsin: "The DNR said in 1989 there were only about 9,000 black bears in the state. Now the population is up to 24,000. 'Our bear population has been steadily increasing and expanding southward'...."
2. They found an alligator in Long Lake in Fond du Lac County.
3. We spotted 6 foxes romping together in our neighbor's lawn just before sunrise the other day. They were very active, even trying to run up a tree. The next day, same time and place, I saw them again. At what point do you say, now, there are too many foxes?
4. Seen today in great numbers: very tiny toads/frogs (about a half inch long), extremely nervous chipmunks, rabbits (doing their best to look like rocks), turkeys.
Source: althouse.blogspot.com
30 Comments+ Sharelabels (6)Flag
Allalligatorsbearsbirdsfoxfrogsrabbits

I've got 7 TikToks for you tonight. Let me know what you like best.

1. You know how Mom just loves to sit outside at the restaurant.

2. Vying for the title Best Ginger.

3. Singing all the parts.

5. The difference between the South and the Midwest.

6. That girl who just got engaged.

Here are my TikTok selections of the day. 8 of them. Let me know what you like best.

1. A demonstration of skill.

3. He's got a message for architects.

4. The paradise that was high school in the 80s.

5. When a Gen Z person is kidnapped.

7. A straight man who just wants to wear high heels and a skirt.