"Is this the end of it? And if so, why couldn’t the Biden administration foresee it being blocked so easily by the courts?"

"Why did they not have stronger legal cards to play with instead of having 43 million filers on a legal and emotional tightrope?"

A Reddit discussion of the current state of the student loan forgiveness program.

Why did Biden get 43 million hopes up?  You can hear the poignancy in the question... or do you think that's phony? Everyone knows the answer to why it was done despite the lack of "stronger legal cards." It's just a question of how outraged they will feel and who they will blame. At least some people will curse the courts — those damned conservatives  — and some will forgive Biden for toying with their feelings because it was worth it, given the modest Democratic Party success in the 2022 elections. You could also say the more obvious it was all along that the program would not hold up in court the less sense it made to invest serious expectations that you'd be getting that $10,000/$20,000 some day.

"A White House wedding has historically been the sort of rare event that can add a modern sheen to the dustiness of the presidency."

"It can — for an afternoon, at least — turn the press from restive to fawning. And it can give the president a needed feel-good story."

That's the sad puffery of the first 3 sentences of "What We Know About Naomi Biden’s White House Wedding/Invitations are in hand, but the administration is taking a state-secret approach to most of the details, citing the privacy of the president’s granddaughter and her fiancé, Peter Neal."

In The New York Times.

Insanely, Trump shows up in this:

In 2019, the bride called a family meeting to urge her grandfather to run for the presidency against Donald J. Trump, who was seeking a second term. At the time, Mr. Biden was hesitant to subject his family to attacks from Mr. Trump. But Ms. Biden — along with her two younger sisters, Finnegan and Maisy, and their cousins — urged him to get into the race.

Biden goes for power-positioning of the hands, but what captures my eye is the expression on Xi's face. 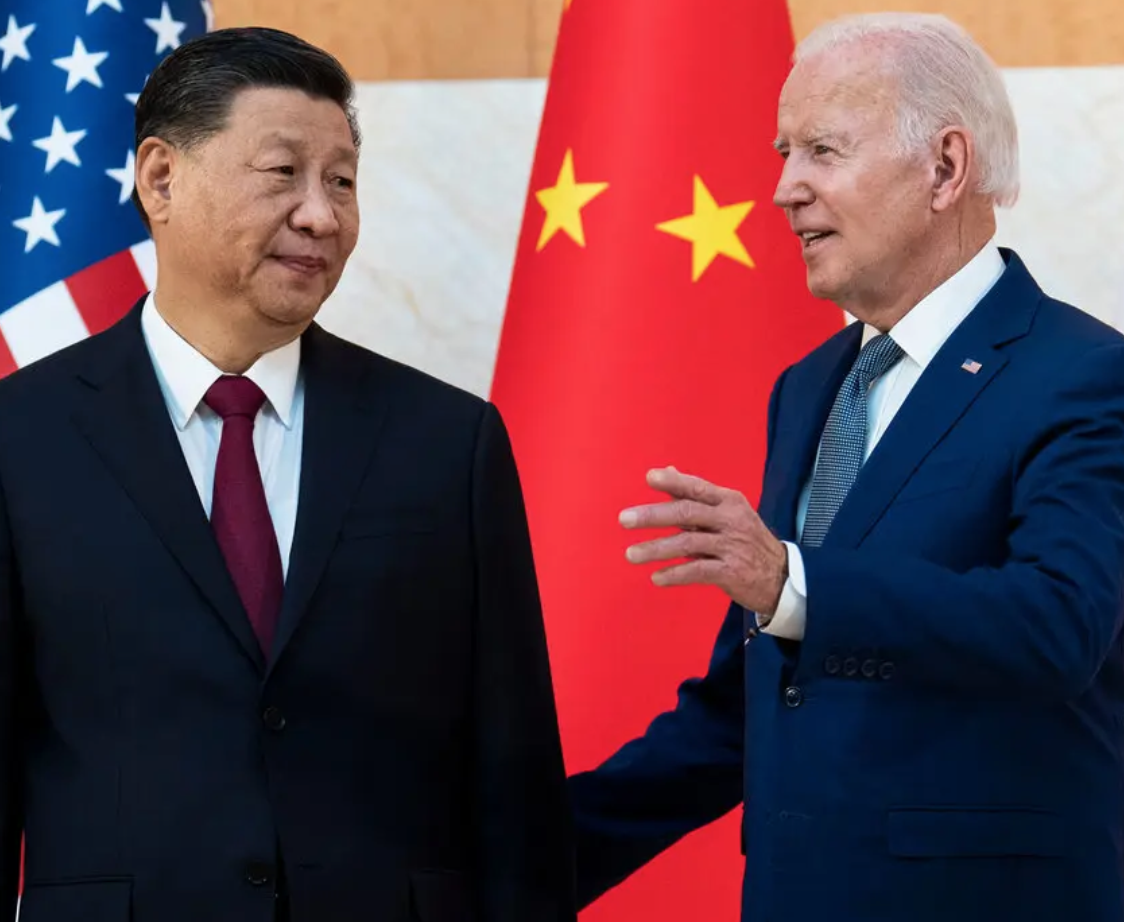 From "Live Updates: Biden and Xi Meet as U.S.-China Tensions Rise/Amid growing disputes over Taiwan, Ukraine, technology and divergent visions of the world order, the leaders of the two superpowers are holding their first face-to-face presidential talks."

I made this screenshot of the central detail of the photo, by Doug Mill, in the NYT. The original framing  extends down beyond the men's knees and across to include 2 and a half more flags. I wanted to contrast Biden's posing for the camera, using stock techniques to seem in charge — touching the other  person's arm, gesturing with the other hand as if he's explaining something important — with Xi's facial expression, which strikes me a very funny.

What's so funny about Xi's expression, though? Does it mean something like, you pathetic little child?

"Readers may recall that during Donald Trump’s presidency, we established a new category, the Bottomless Pinocchio..."

"... to account for false or misleading statements repeated so often that they became a form of propaganda. A statement would get added to the list if it had earned a Three or Four Pinocchios rating and been repeated at least 20 times. By the end of the Trump presidency, 56 claims made by Trump had qualified. Now..." 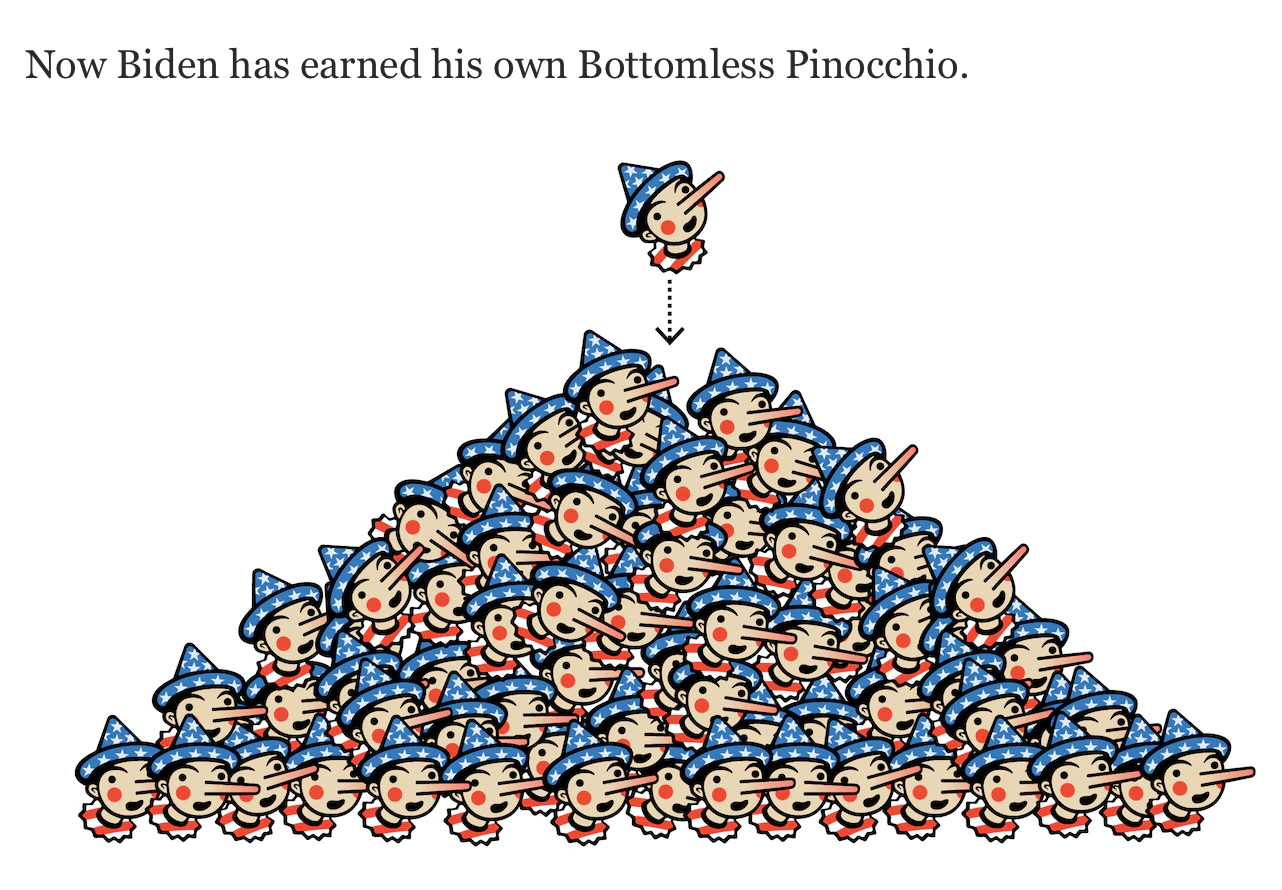 Writes the Washington Post fact checker, Glenn Kessler in "A Bottomless Pinocchio for Biden — and other recent gaffes."

The 2022 elections are not until tomorrow, but already we see what's going to happen. Biden's about to get the bum's rush.

Finally, I have more TikToks for you — 10 this time.

1. Dexter, the dog that walks.

2. I know what it's like to be driving along and suddenly a deer jumps into the path of your car.

4. Your mental focus after 2 years on TikTok.

8. WaPo thinks its video will be suppressed by TikTok, but it came up in my feed (and I wasn't already following them).

9. The context of that iconic migrant mother photograph.

Biden says he got the student loan forgiveness program passed by Congress.

Cat-napping — taking advantage of the little spaces — is a super-power, not a weakness.

"While Trump’s Twitter feed provided near-hourly windows into the presidential id, Biden’s comments are projected to the public less often, but just as revealingly, through the donor gatherings..."

"... among the few events where he does not use a teleprompter. At a fundraiser Thursday in Brentwood, Calif.,... Biden veered into an unprompted discussion of technological changes that have fractured society and made discerning the truth all the more difficult. 'There are no editors anymore,' he said. 'The ability of newspapers to have much impact is de minimis.'"

From "Party gatherings give a window into Biden’s mind, from nukes to Pelosi/Democratic fundraisers provide rare unscripted moments when the president seems to muse aloud" by Matt Vise.

That's in The Washington Post, a newspaper, which would like to have an impact that is more than de minimis.

But it's always so transparent that its trying to help Biden, like here. It's presumed that "Biden's mind" is a place of substance, into which we are honored to peer. And his speech is not a muddled mess, but a clear representation of what's in that mind. We have "a window" as he "muses aloud."

Is that ludicrous or horrible or am I being unfair to the old statesman? I'll turn away and amuse you with the etymology of the verb "muse." From the OED: