"Strict gender roles have governed domestic life in Japan for generations. Men often retire without ever having held a paring knife..."

Published:
"... or washed a dish. Those who lose a spouse often find themselves unable to do the most rudimentary chores. An old Japanese saying — 'Danshi-chubo-ni-hairazu,' or 'men should be ashamed to be found in the kitchen' — has spooked husbands from most any housework. Even those who wanted to help typically lacked the know-how.... Simmering resentments frequently come to a head once a man’s career ends and his wife starts to question the arrangement, Tokukura said. 'The power dynamic changes. The wife asks, "Why do I have to do all the housework if you are no longer bringing in the money?"'"

From "Older Japanese men, lost in the kitchen, turn to housework school" (WaPo).

At housework school, old men meet other other old men:

Five of them were fixing a meal recently, Kaneko standing tall in front of the stove and helming the frying pan as the others took turns placing mounds of minced chicken in oil.

“Don’t overdo it,” he warned 80-year-old Kikuo Yano, laughing as he rounded out the nuggets with a spoon. Yano has been taking classes this fall to surprise his wife of 43 years.

“All this time my wife has done everything,” the retired architect acknowledged. “I haven’t done anything around the house. If I don’t know how to, I guess there’s nothing I can do. But if I learn how to do it, then it’s time I help.”

He now wakes up early to press his clothes. Ten times he has practiced a curry dish he plans on serving his family on New Year’s Day. “You see this shirt?” he says, running his hands up and down the sleeve, a smile stretching across his face. “I ironed it myself."

I like the idea of taking distinct pride in doing the humble, simple, concrete things in life. It's a shame to imbue these things with shame (especially if that is part of system of subordinating others).

"It’s not a close call. If you ask, 'Who’s the most likely to take this republic down?' It would be the teacher’s unions, and the filth that they’re teaching our kids, and the fact that they don’t know math and reading or writing. These are the things that candidates should speak to in a way that says, 'Here’s the problem. Here’s a proposal for how to solve it. And if given the opportunity, these are the things I will go work on to try and deliver that outcome that fixes that problem.' Pretty straightforward stuff."

Said Mike Pompeo, quoted in "Mike Pompeo: 'The most dangerous person in the world is Randi Weingarten'" (Semafor).

Pompeo, the former Secretary of State, seems to intend to run for the GOP presidential nomination in 2024.

Pompeo is eager to "ban TikTok." Asked why, he sputters short sentences:

Money. Economics. Kids like TikTok. There’s always resistance when you make changes that are significant. We should absolutely ban TikTok, but banning TikTok, again, that’s good — but we should ban every element of Chinese technology that sits inside our ecosystem. And we shouldn’t have Chinese research money in our senior institutions to research learning around America. We shouldn’t have them in our national laboratories. We closed the consulate in Houston, Texas — the single largest spy operation ever conducted in America, I believe was being conducted out of the Chinese consulate in Houston, Texas. And America knew it for a long time and didn’t do a damn thing about it. The Chinese Communist Party is coming for your kids. TikTok is a piece of this and I regret that we didn’t get that done.

I've heard some people promoting Mike Pompeo as a more "presidential"-seeming version of Trump — more presentable and polished and sophisticated. I'm not hearing it.

"William Heard Kilpatrick, one of the most influential pedagogical figures of the early twentieth century, would have felt right at home in today’s educational culture wars."

Published:
"Back then, as now, the traditionalist defense of math education came from the idea that the subject created order and discipline in the minds of young students. The child who could solve a geometric proof, for example, would carry that logic and work ethic into his professional life, even if it did not entail any numbers at all. Kilpatrick, a popular reformer... dismissed that idea. Algebra and geometry, he believed, should not be widely taught in high schools because they were an 'intellectual luxury,' and 'harmful rather than helpful to the kind of thinking necessary for ordinary living.' Not everyone was going to need or even have the intelligence to complete an algebra course, Kilpatrick reasoned. Why bother teaching it to them? In 1915, Kilpatrick chaired an influential National Education Association committee tasked with looking into the reform of math instruction in high school. He amplified his attack on the place of math in schools, as the committee’s report declared that nothing in mathematics should be taught unless 'its (probable) value can be shown,' and recommended the traditional high-school-mathematics curriculum for only a select few...."

From "How Math Became an Object of the Culture Wars/As was true in the nineties, today’s fights about math are not entirely about what kids actually learn in their classrooms" by Jay Caspian Kang (The New Yorker).

"Unschooling argues that if you let kids do what they want, they’ll end up learning what they need to know in order to live happy, engaged lives."

"So what if they don’t learn fractions until they’re 12? The 'learning target' of conventional schools are designed to give taxpayers proof their tax dollars are 'working.' Unschooling eschews accountability of that kind and centers the child’s inner compass. This all holds limited appeal to me because its approach is generally individualistic, a horseshoe-theory meeting of radical progressive permissiveness and separatist libertarian self-determinism. People who make the case for unschooling, like the filmmaker Astra Taylor, who was unschooled until she was 13, are usually exceptional people with unconventional families. Most of us are ordinary people with jobs. We’re foot soldiers of conformity, and we’re imprisoned by our mortgages, student debts, limited skill sets, and sedentary habits. You can pity us and you can call us 'sheeple,' but unless you’re willing to forgive our debts, we’re going to keep working, and we won’t have the time to mind our kids while they unschool themselves...."

From "Would Unschooling Actually Make My Kids Any Happier?" by Kathryn Jezer-Morton (The Cut).

“The pandemic provided us with a great opportunity to disentangle whether this beauty premium is due to discrimination or the result of some productive attribute,” said Adrian Mehic of Lund University in Sweden, the author of the new study....

Before the pandemic, better-looking students of both sexes tended to get better grades. This beauty premium boosted their marks by a few percentage points.... However, when lectures went online and in-person teaching ended, the attractive females suddenly lost this advantage.

The “beauty bonus” seen for the attractive females prior to the pandemic fell by about 80 per cent after the move to remote teaching. The professors, it seems, had been discriminating in their favour.

But the attractive males maintained their advantage!

“I believe that the attractive males have some productivity-enhancing attribute,” Mehic said. “Maybe because they have higher self-confidence, which should lead to better grades regardless of the mode of instruction.”

It's hard to believe, isn't it? Attractive males and females were getting better grades, but when they were not seen in person — they could have their cameras on or off for on-line lectures — the females lost nearly all their advantage and the males stayed the same. The researcher goes with the theory that the males who were attractive acquired a personality trait — confidence — that caused them to do better work.

But why wouldn't females acquire confidence from their attractiveness and why wouldn't it enhance their performance too? You'd have to say something like: The experience of being an attractive female doesn't increase your confidence. And the females never were doing better work, they were just getting higher grades because their teachers were responding to their good looks.

But why weren't the teachers responding to the good looks of the men? I'd hypothesize that there's something about female attractiveness that motivates people to help them. Perhaps there's a prejudice that all women need help, and people are selective in deciding which females to help. In this hypothesis, I'd say that when men are attractive, they are judged to be competent, and they feel confident, and, on their own, they do the same good work however the classes are done.

"Students... performed abysmally on exams that would have seemed too easy only a few years ago...."

"Exams that should have yielded a B average dropped to C- or worse. Single digit scores became common and we even had zeros on exams, something that had never happened before. Despite those declining scores, about 60 percent of my students still got As and Bs this past semester. At the same time the bottom was dropping out under the poorly performing members of the class; the top students, while still deserving their excellent grades, were no longer being stretched. Previously, they would be getting 90s, now they were routinely getting 100. Their A grades would not change of course, but they were not being challenged and thus not learning as much as they should."

From "I was fired from NYU after students complained that the class was too hard. Who’s next?/In these times when critical thinking skills are desperately needed, it is more important than ever to dedicate ourselves to the high standards of education" by Maitland Jones Jr. 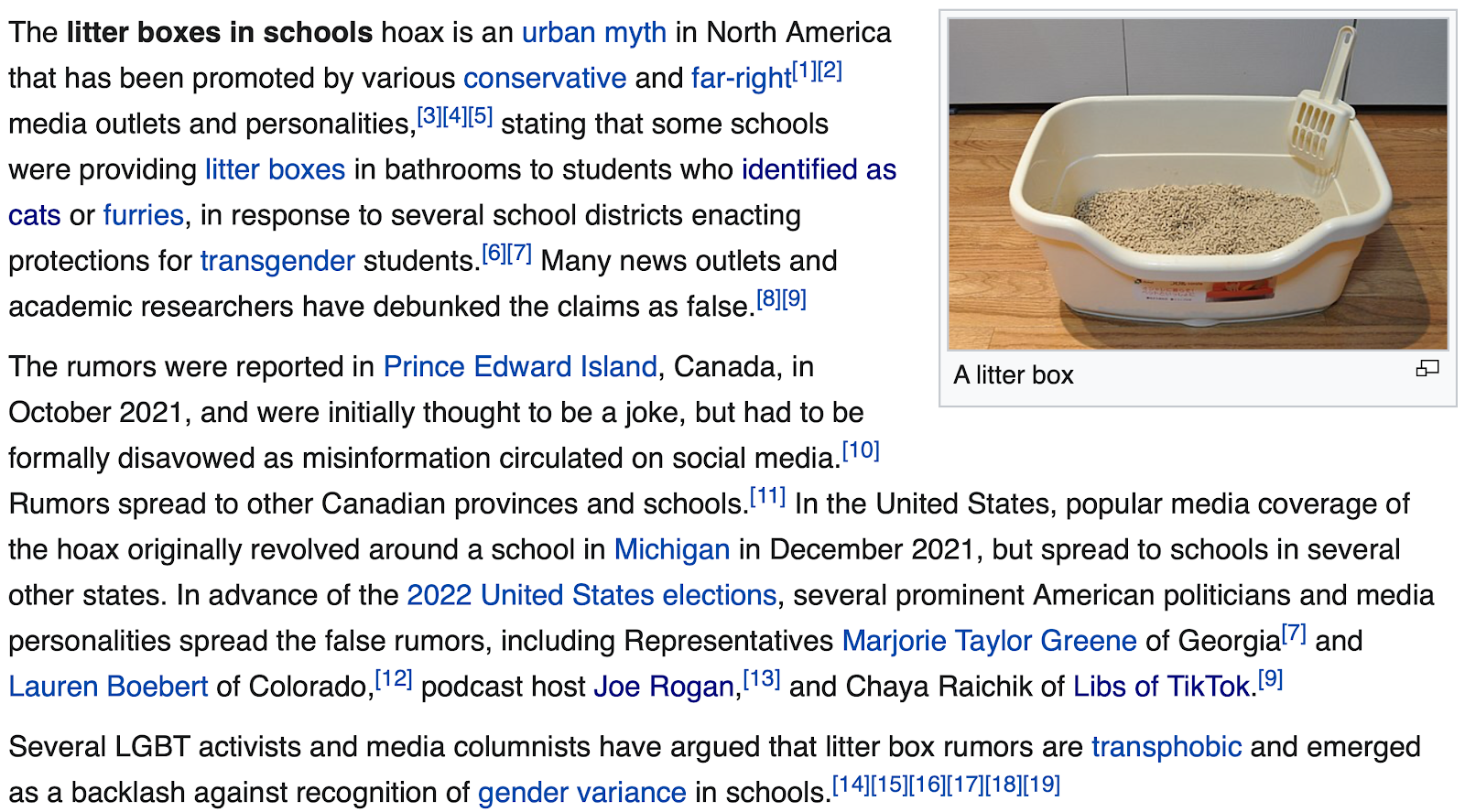 I used a screenshot because I wanted you to experience the absurdity of the picture of an actual cat litter box. Surely, if there were a litter box for a human being it would need to be proportional, and I think a third grader is about 6 times as large as a cat. I don't know the urine output of a child versus a cat, but, seriously, you're going to need a bigger box. But if it is a hoax — and Wikipedia assures me it is a hoax — then there is no box and that's the whole point.

"Even if you’re not inclined to care much about men’s welfare, their growing anomie and resentment is everyone’s problem, fueling right-wing populist movements..."

"... around the world. People who feel unmoored and demeaned are going to be receptive to the idea that the natural order of things has been upended, the core claim of reactionary politics. Some of men’s dislocation is an inevitable product of modernization, which, by making physical brawn less economically important, blurs men and women’s social roles."

Writes Michelle Goldberg in "Boys and Men Are in Crisis Because Society Is" (NYT).

It is not just America, after all, where more women than men earn college degrees. There are also more female than male college students in Iran and, to a lesser extent, Saudi Arabia, which suggests, at least to me, that girls may be more innately disposed to academic life....

And what is it to be predisposed to "academic life"? Is she saying it seems that girls are born better at thinking and understanding or better at tolerating long periods of listening and reading while confined indoors?

Goldberg is discussing the new book, by Richard V. Reeves, "Of Boys and Men: Why the Modern Male Is Struggling, Why It Matters, and What to Do About It.” Education should be improved, apparently.