"There are various theories purporting to explain Musk’s hard right turn: a childhood in apartheid South Africa, his connection with Peter Thiel, disappointments in his personal life."

"Whatever the truth of the matter, whatever right-leaning tendencies he may have had before a couple years ago appear to have been latent or unformed. Now the transformation is almost complete. He’s done with general 'free speech' grievance and springing for alternative viewpoints. He’s routinely pushing all the far right storylines from woke groomers to great replacement. One particularly notable hint about the future came in a fractious interaction on Wednesday when Musk rolled out his own antic Dolchstoßlegende manque. In exchange about advertiser departures and alleged media bias, Musk claimed that he had cut a with [sic] civil rights groups to create a 'moderation council' but that they had broken the deal. Perhaps needless to say, this did not happen. The reference is to a chaotic meeting Musk held with a group of leaders of prominent civil rights groups, including the NAACP and the ADL, on November 2nd. Musk actually announced the 'moderation council' days earlier. We’re hardly four weeks into the Elon era on Twitter and he’s already cueing up a storyline in which he tried to placate the Blacks and the Jews and the gays but they betrayed him and set out to 'kill Twitter.' Not pretty...."

I'm not vouching for any of that, and it doesn't reflect my opinion of what Musk is doing with Twitter. I just think it's an important viewpoint that ought to be out in the sunlight.

By the way, who first said "Sunlight is the best disinfectant"? Was it Justice Brandeis?

As gas-light is found to be the best nocturnal police, so the universe protects itself by pitiless publicity.

That's gaslight, not sunlight, but Emerson has the analogy that works in the free-speech context.

In 1879 the journal “The Laws of Health” edited by Robert Walter published a short article without a byline about “Disinfectants” which included the following excerpt:

Sunlight is the best disinfectant. Malaria, for instance, which is one of the most difficult things to contend against, is dissipated when the sun shines, and exerts its pernicious influence at night.

But that wasn't an analogy. It was literally about germs. Other journals in the late 1800s made similar statements. It seems to have become common wisdom, in the non-metaphorical sense, before Brandeis connected it back to Emerson's metaphor:

In 1913 “Harper’s Weekly” published “What Publicity Can Do” by Louis D. Brandeis which began with the following words:

Publicity is justly commended as a remedy for social and industrial diseases. Sunlight is said to be the best of disinfectants; electric light the most efficient policeman. And publicity has already played an important part in the struggle against the Money Trust....

So, when you're talking about wanting to get bad ideas out in the open so we can destroy them, you can say you got "Sunlight is the best disinfectant" from Justice Brandeis. But if you're, say, recommending hanging laundry outside on a clothesline, there's zero need to complicate matters by crediting a Supreme Court Justice.

"'The people have spoken,' Mr. Musk said on Twitter. 'Trump will be reinstated.' He added the Latin phrase 'Vox Populi, Vox Dei'..." 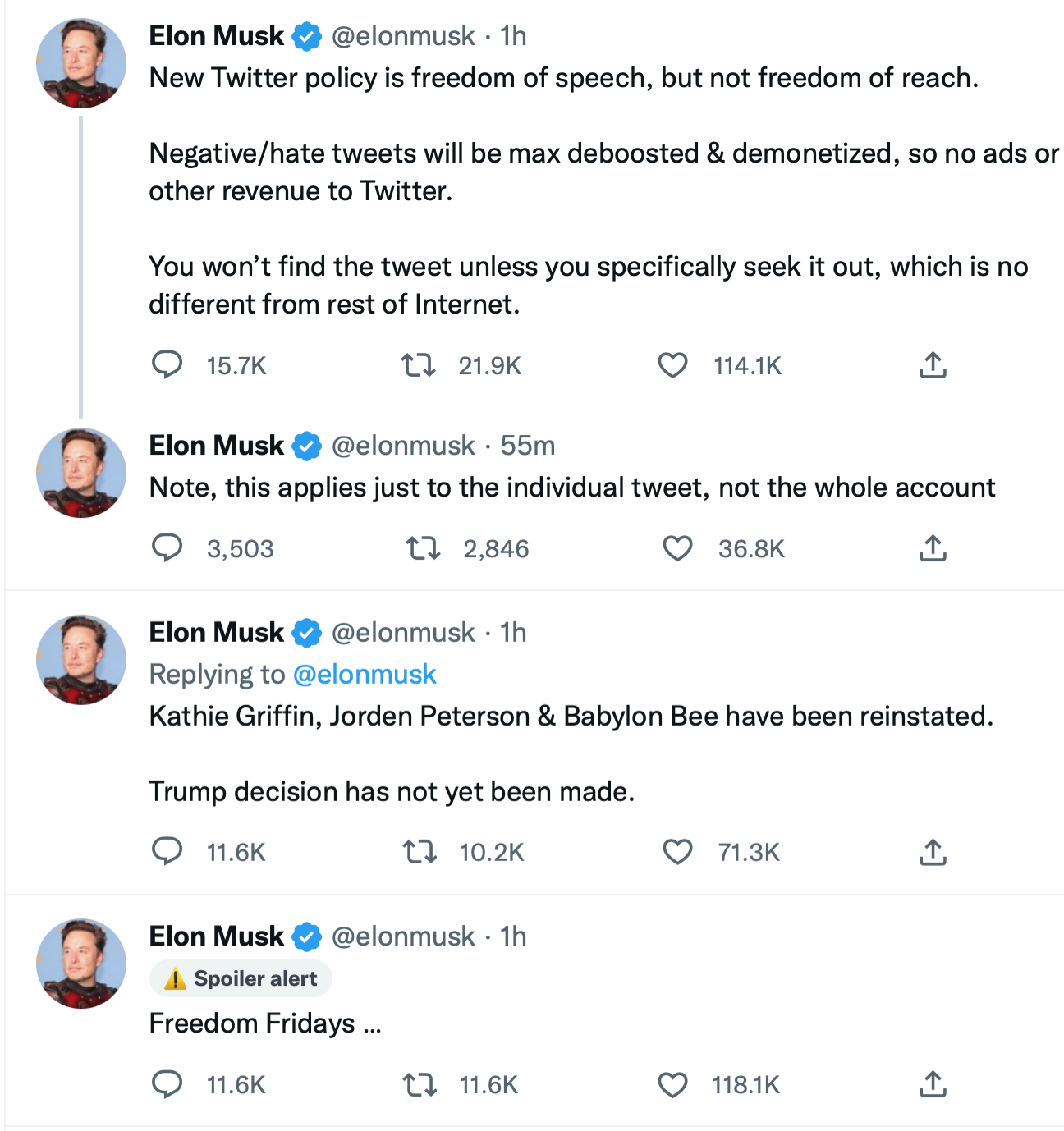 At least he corrected it, but the egregious mistake shows how slapdash and sloppy this takeover is. (Remember "free speech"?)

"Presumably, [TikTok] is designed to identify and promote content with a high chance of going viral — catchy music, dances, jokes and the like."

Published:
"But in the hands of ByteDance [a Chinese company], it could also be used to subtly indoctrinate American citizens.... The CCP could also use TikTok to propagate videos that support party-friendly politicians or exacerbate discord in American society. Such videos need not originate from CCP proxies — they could be created by anyone. With essentially unlimited data on user-made content at its disposal, Beijing can leverage it to fan the flames of domestic division. And thanks to the rising number of adults who get their news from TikTok, the platform has the ability to influence which issues Americans learn about, what information they consider accurate, and what conclusions they draw from world events. This places extraordinary power in the hands of company employees who could any day be overruled by the CCP."

That's from "TikTok, time’s up. The app should be banned in America" —in The Washington Post — by Marco Rubio and Mike Gallagher, who say they are introducing legislation to ban TikTok in the United States.

Everything is always subtly indoctrinating us. Discord is always getting exacerbated. There will always be a fanning of flames of domestic division, and endless forces will forever influence what information we consider accurate. Gallagher and Rubio haven't made the argument that this one medium of free expression ought to be banned.

If they are such experts on propaganda, why can't they write better propaganda than this op-ed?

"Devastating cuts to Twitter’s workforce on Friday, four days before the midterm elections, are fueling anxieties among political campaigns..."

"Female beauty pageants are allowed to exclude transgender women, the U.S. Court of Appeals for the 9th Circuit has ruled."

Published:
"The case stems from a complaint filed by Anita Green, a transgender contestant in several Miss United States of America pageants.... Mandating Miss USA allow Green to be in the pageant would amount to forcing the pageant to say that transgender women are included in a vision of ideal American womanhood and that would amount to compelled speech, the court held. 'Given a pageant's competitive and performative structure, it is clear that who competes and succeeds in a pageant is how the pageant speaks,' wrote the judges. 'Put differently, the Pageant's message cannot be divorced from the Pageant's selection and evaluation of contestants.'"

The Reason writer, Elizabeth Nolan Brown, opines: "I don't think the court is wrong about what allowing transgender contestants implies, though it is a shame Miss USA doesn't broaden its horizons a bit. Being more inclusive seems like not only the right thing to do but also a way it could shed some of its old-fashioned, intolerant image and help with its lack of resonance with today's audiences."

Me, I don't care about helping beauty pageants gain "resonance" with more people. They are inherently old-fashioned. They're into outward manifestations of femaleness, and that puts them on the same wavelength as transgender women, ironically. But it's all expression, and there's a problem with using someone else's platform of expression to amplify your own expression.

Here's the text of the court opinion.

"And while Musk remains a darling of the right wing in America, European regulators are watching closely."

"NPR reports that 'The European Union’s competition czar has a message for Twitter’s new boss Elon Musk: We are watching you.' The report quotes Margrethe Vestager, the European Commission’s executive vice president overseeing digital policy, who warned: 'There is a European rulebook, and you should live by it. Otherwise, we have the penalties. We have the fines. We have all the assessments and all the decisions that will come to haunt you.' She doesn’t sound like someone Musk wants to mess with. MAGA Republicans in the United States might be celebrating Musk’s takeover as a triumph of 'one of their own,' but Democrats might be in power in the years to come. They might be tempted to repeal Section 230 of the Communications Decency Act, the federal provision that protects social media platforms from liability for content published on their sites. (Even eliminating such protections for the owners of the platform could bring the curtain down on the Musk show.)"

Writes Jennifer Rubin in "Musk can trash his sandbox. The rest of us don’t have to play there" (WaPo).

I guess Rubin loves the "European rulebook" and the idea that the Democratic Party will act aggressively to push back free speech. That's rather awful. It has really been sad to see the "right wing" label slapped on everything. In my little world, I've had it happen to me. It's really awful. What does it take to make a person "right wing" these days? It seems to be only a strong position in favor of free speech! I remember when "free speech" was a left-wing battle cry.

"Even a holiday which celebrates debauchery, irreverence, and immature or dark humor should have no place for words or actions of hate."

"This deranged individual was looking to create fear and anxiety. We don't believe that he is a student, rather an outside provocateur."

1. Wearing a Hitler costume is protected speech, so no crime has been reported.

2. Even though "no reports received by MPD rise to the level of a prosecutable crime," it nevertheless identified the person and interviewed him.

3. It turns out that this person "has a cognitive impairment due to a past traumatic brain injury."

ALSO: Who called the police on a guy in a bad costume? Did anyone call the police on the person who beat up this mentally impaired person?