Published:
Joe Maurath stores his collection of vintage streetlights in a maze-like museum behind his home in Abington, Massachusetts. 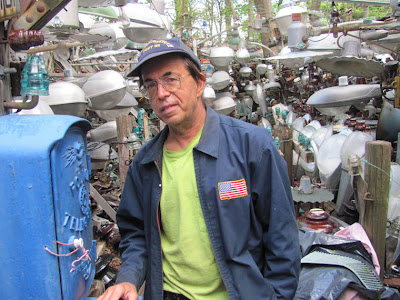 Ever since he was a child, he has always been fascinated by telephone poles, streetlights, and insulators—all the so called “street furniture.” He worked as a meter reader, and he has befriended utility crews, who often given him retired lamps and housings.

He loves seeing streetlights in their element close up from a bucket truck. “You gotta go up in a truck and look at these in the wild,” he told me. “It’s a whole different world up there.” 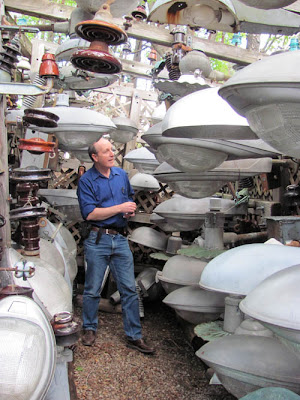 He has a special fondness for the “cobra head” style streetlights from the 1950s. I was struck with how big the housings appear when they’re brought down to eye level. They look like weird metallic mushrooms or UFOs.

Here's a Westinghouse OV-25 Separate Ballast from 1963 in the wild. Maurath's collection focuses on streetlights and insulators, but he's also got high voltage signs, switches, and police call boxes. Movie companies rent them from time to time to use in period films.
The older mercury-vapor illumination, with its pleasant cool color tinge, has almost entirely been replaced by the orange-colored high pressure sodium lamps. The traditional mercury vapor lamps are friendlier to trees, and they make better economic and environmental sense, he says, because the lamps last longer.
Mercury lights also have the aesthetic advantage of a fuller color spectrum. High-pressure sodium (HPS) spikes almost entirely in the yellow-orange, and has an abysmal CRI (Color rendering index). “Sodium vapor light at night has that city-crime look to it,” he said. “And it makes the snow look dirty.” Hopefully, the new LED street lights, which have superior CRI, may eventually replace HPS.
READ MORE:
Joe's website: Vintage Streetlights
More photos of Joe's museum
Video comparing color appearance of HPS and LED
More about all this in my book on Color and Light
Previously on GJ: Multi-colored Streetlights
Source: gurneyjourney.blogspot.com
+ Sharelabels (2)Flag
AllLightingRabbit Trails