Rackstraw Downes and the Rotating Viewpoint

Rackstraw Downes and the Rotating Viewpoint

Published:
Rackstraw Downes (born 1939) has an interesting approach to perspective which often results in unexpected twisting of the lines in the scene, such as the way the catenary curves of the power lines above are conveyed with compound curves.

Downes points out that the early perspective theorists offered two competing ideas for how to translate the 3D world onto a 2D surface. One is the familiar straight-line perspective codified by Leon Battista Alberti in the early 1400s.

Around the same time, other artists explored a way to interpret perspective using curving lines. But curved-space perspective mostly fell out of favor for centuries, until recently.

Curved space projections look familiar to us now, thanks to wide angle lenses and the rotating cameras that can capture a 360-degree field of view.

In many of his paintings, Downes uses a curvilinear perspective that's reminiscent of these photographic approaches. The painting below takes in more than 90 degrees.

Albertian perspective requires holding the head in one line of sight, what Downes calls a "head-in-a-vise" system. Downes' vistas often take in a 180 degree view, which would only be possible if you turned your head from one direction to another.

Such head-turning is in some ways more natural. It's what we do when we look around in a scene. Downes wants to capture this experience "empirically," a word he uses a lot. He's not terribly interested in following a strict geometric system, but would rather interpret the scene each time as he sees it. 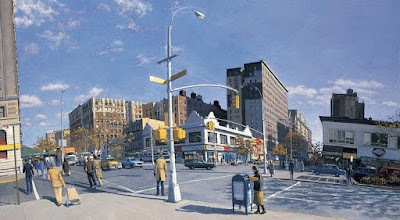 Sometimes the resulting paintings have idiosyncratic features. For example, in the scene above, the horizon or eye level is below the center of the image. That would normally require it to be cupped upward in a concave fashion. But instead, Downes sees the horizon as bulging upward convexly. This would only happen in a photo if you pointed a super wide angle lens downward and cropped off the bottom half of the image.

Downes also makes the line of the building at left leaning straight outward, rather than curving back into the scene at the top like a parenthesis, as a normal wide angle perspective would require. These idiosyncrasies of perspective might strike different people in different ways.

To me this one has a queasy, funhouse feeling, and also the sense that the city scene is on the surface of a small spherical planet. Downes lays out the case for his approach to perspective in an essay called "Turning the Head in Empirical Space," which appears in the back of his book Rackstraw Downes

, published in 2005 by the Princeton University Press.

10 Comments on Gurney Journey: Rackstraw Downes and the Rotating Viewpoint