Strange Fate of "The Carpenter's Son"

Strange Fate of "The Carpenter's Son" 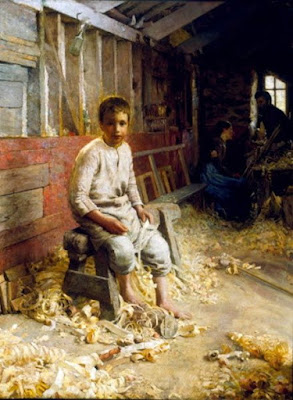 According to David Tovey:

Mr. Simmons "depicted his eldest son in his St Ives studio with wood-shavings scattered around, so converting the scene into a depiction of the Christ Child."

"The Chantrey Trustees were initially impressed by this informal presentation of Christ and offered to buy the painting, but an article in a Scottish newspaper denouncing it as heretical made them revoke their offer, which did not impress Simmons."

The painting ended up in the possession of the First Unitarian Church, New Bedford, Massachusetts.

In 1996 the painting suffered a strange case of vandalism. According to Wikipedia:

The painting was "yanked from the wall and cut out from its frame. The section depicting Jesus [was] taken, cutout and removed. The rest of the painting [was] left lying on the floor. The lost section was found in 2006, rolled up behind a refrigerator when it was being removed from the congregation’s kitchen. The painting was then restored and ownership transferred to the Rotch-Jones-Duff House and Garden Museum."

3 Comments on Gurney Journey: Strange Fate of "The Carpenter's Son"