Published:
Thanks to your support and enthusiasm, "Metro North"—Vol.2 of the Living Sketchbook app—is in production and will come out on April 17. (Link to video) 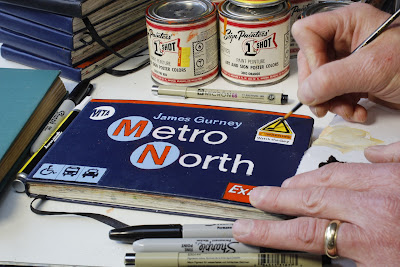 for the lettering on a Pentalic watercolor journal

.
If you haven't experienced it yet, check out the first volume, "Boyhood Home," for iOS phones and tablets at the App Store and for Android devices at Google Play. We're excited that it's one of the most popular apps in the Art and Design categories. 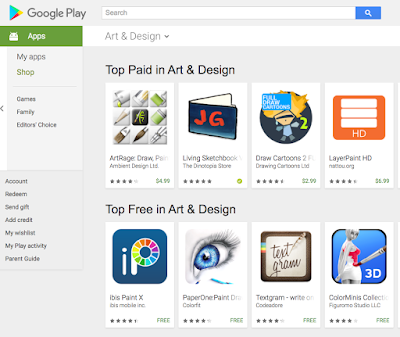 Shari Blaukopf of Urban Sketchers says:
"There is a lesson to be learned with every sketch in James Gurney's The Living Sketchbook — whether it's about light, colour, materials or composition. Spending time with each sketch and being able to zoom in on them with your tablet allows you to really think about how they were created. And videos that accompany many of the sketches enrich the experience because you see the sketch develop from large colour blocks down to final details. And of course hearing James narrate his thought process — whether it be about his limited palette choices or the characters he meets while sketching — is what makes it come alive for me. It's done with warmth, humour, honesty and a vast wealth of knowledge."

Some questions that you've asked:

(from Carl and Dominick Saponaro)
1. Is the app going to include additional sketchbooks as updates to the app? Or will it entail purchasing a new app for each sketchbook released?
We explored the option of doing additional releases in-app, but it added a huge amount of technical complexity, so we're going to release them as separate apps that you could store in a folder or "bookshelf." They'll be numbered and named just like the actual sketchbooks.
(from Valerie)
3. I'm having trouble getting audio on my iPhone 7+. What should I do?
Try these ideas:
1. Volume adjustment or the headphones. Are other apps on your phone playing audio?
2. Go to Settings > Sounds and drag the Ringer And Alerts slider to turn the volume up.
3. If your device has a Ring/Silent switch, make sure it's set to ring.
4. Restart your device.
5. Open an app that has music or sound effects. Adjust the volume with the volume buttons or the slider in Control Center.
6. Go to Settings > Bluetooth and turn off Bluetooth. Then check the sound again.

(from Doug Condon)
2. Are there plans to sell the actual app tech to allow artists to record their own sketchbooks in the same way?
Several artists have expressed an interest, and we're considering whether to 1) Publish a select group of other artists using our brand and platform, or 2) for Dan Gurney, the app coder, to freelance directly with artists to create their own. Either of those would be a ways down the road. Right now we're putting most of our energy into launching a series of my sketchbooks, and we'll see where it takes us. I'd suggest if you want to create one of these down the road to be sure to capture audio and video multi-media of the content that you're sketching.
Source: gurneyjourney.blogspot.com
+ Sharelabels (1)Flag
AllLiving Sketchbook