Serov: Seeing the Person in the Model

Serov: Seeing the Person in the Model

Published:
Despite his busy career as a portrait painter, Valentin Serov taught art for twelve years. He emphasized the importance of studying real life with relentless fidelity.
He brought models into the studio, but he wanted students to think of them as real people, with a life and a soul behind their appearance.

According to Svetlana Yesenina, "Serov replaced the professional models used at the school with ordinary people - caretakers, cabmen, street traders and the like - whom he would find on the streets and bring to the school."

"Nikolai Ulyanov reminisced how he and Serov once found in the Khitrovka marketplace a young lad who turned out to be a peasant from Ryazan, and invited him to sit for the student artists."
"At his classes models were no longer simply models: Serov taught his students to see in them their unique individuality and to convey it through the 'stories' told in the pictures (as Serov himself did in his portraits)."

"In order to help his students locate these narrative 'pegs,' he cultivated in his workshop a special easy-going atmosphere, trying to make the models feel at home, open up and carry themselves as naturally as possible." 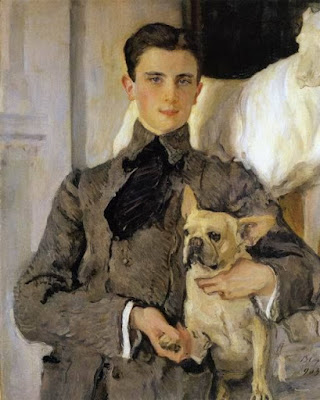 3 Comments on Gurney Journey: Serov: Seeing the Person in the Model

Report "Serov: Seeing the Person in the Model"