In my recent painting of a street scene in Ireland, I decided not to include people in the scene. 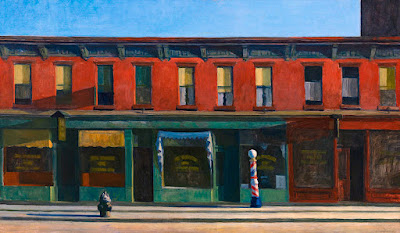 The image that occurred to me was Early Sunday Morning by Edward Hopper, painted in 1930. He says that the word "Sunday" was tacked on by someone else.

With or without the title, the painting gives the feeling of either a quiet morning when people are still asleep or a desolate row of shops stilled by the Great Depression.

Hopper said the scene "was almost a literal translation of Seventh Avenue" in New York, but it wasn't literal at all, as you can see from the photo. 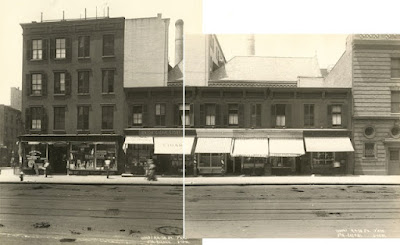 He rolled up the awnings, cleared away the far buildings, and blurred the signs on the shops. He also originally planned to have a woman looking out of an upper window, but he removed her.

By holding back on specific details his painting transcends a literal portrait of an actual street and achieves a more universal appeal.