Published:
It's difficult to learn about the teachings of the Russian Academy because not much information is available in English.

Fortunately, a few years ago, Vladimir Mogilevtsev, a professor at the Russian Academy of Arts in Saint Petersburg, released two books: Fundamentals of Drawing and Fundamentals of Painting, which I've reviewed on the blog.
Now the third book in his series, Fundamentals of Composition, is also available in English. 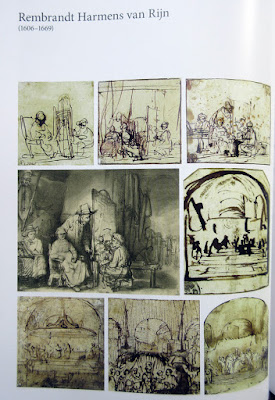 Rather than thinking of composition in purely aesthetic terms, he starts with an emphasis on the concept or story that drives the picture.
In this respect, Mr. Mogilevtsev's approach is similar to Howard Pyle, who always focused on the concept that powered the picture and made sure the design supported that idea. 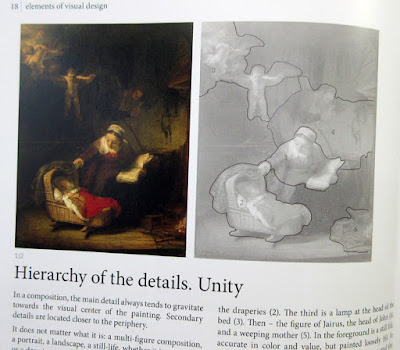 The book covers basic principles, such as variety, shape, silhouette, edges, unity, rhythm, color, and texture. But his coverage of these familiar ideas is fresh and original, and he provides lots of examples.
He avoids laying down rules or laws, because one generation of artists breaks the rules of the previous generation. All of the basic principles are universal enough to have remained in place despite the changing styles through history.
Most of the examples used in the book are from old masters, such as Michelangelo and Rembrandt, as well as 19th century Russians, such as Valentin Serov and Ilya Repin. 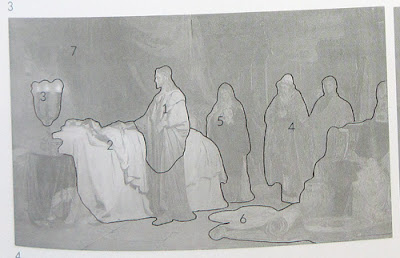 Repin's painting of Jesus raising Jairus's daughter's is analyzed in terms of the hierarchy of details.
Instead of trying to reveal a hidden grid of geometric relationships, this approach breaks up the picture into interest areas to show what's most important in it. The shapes are mapped out like a puzzle and numbered according to their importance.
The second half of the book presents a wealth of examples of unpublished preliminary sketches and studies by Russian painters such as Surikov, Repin, Serov, and Ivanov (above). Alexander Ivanov produced hundreds of exquisite studies over a 20 year period in preparation for his painting of The Appearance of Christ Before the People.
As with the other books by publisher 4Art, the production is high quality. The book is hardcover, 9.25 x 13.5 inches, 88 pages, printed throughout in color on chrome-coat paper.