Published:
Our eyes work with our brain to make sense of the world.
At any given moment our conscious attention is fixated on one spot, but we're also guessing what's around it. This peripheral awareness cues the eyes where to jump next. That jumping or saltation happens about three times per second.
By combining data from brain scans and eye-tracking, scientists at the University of Birmingham are trying to understand how we guess at what the next point of attention might be, and how different regions of the brain cooperate in this "pipeline of meaning" as "one object is established while another region of the brain is simultaneously deciding which next item is important." 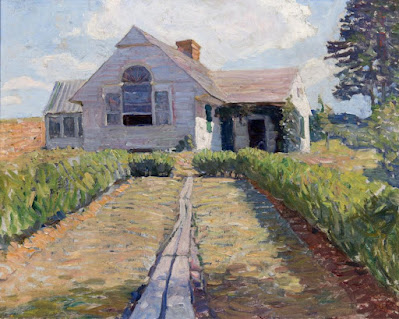 N.C. Wyeth (1882-1945), The Studio, ca. 1913-1915, oil on canvas, 16 x 20 1/4 in.
Collection of Mr. and Mrs. Frank E. Fowler. Photo Rick Rhodes
The scientists say: "Humans do not necessarily perceive objects simply one after another (in series), and nor do they perceive items simultaneously (in parallel). Instead, they establish a pipeline of observations, in which meaning from one object is established while another region of the brain is simultaneously deciding which next item is important."
A similar process happens when we read text. "The neuronal activity required to scan the next word in a sentence also increases according to the complexity of the word."
Read more: Our eyes and brain work together to create a ‘pipeline’ of meaning – new study
Source: gurneyjourney.blogspot.com
+ Sharelabels (1)Flag
AllVisual Perception