On the Way to Dog Park

Published:
Smooth, the husky, wants to get out and play with other dogs. So we drive to the dog park. I'm sitting in the back seat with my sketchbook open. 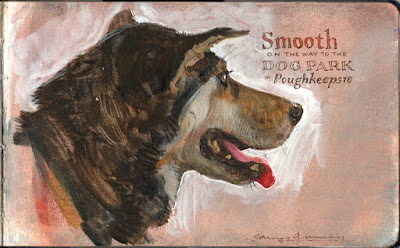 I start painting Smooth with his mouth closed. But once he opens it, I change my mind and want to capture that doggy smile, with the tongue draped over his teeth and the red color on the underside.
I'm using watercolor with casein white on a casein underpainting. It's a fairly non-absorbent surface that makes the paint float on the surface. But it's nice for getting fur textures. (Link to video on Facebook)
----- 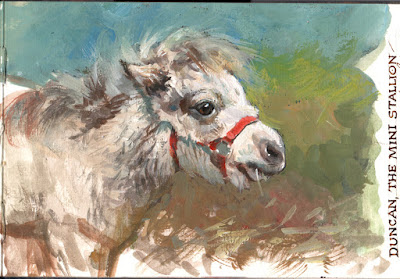 Duncan is the new mini horse on the farm. He's nervous because he hasn't met the other horses yet and all the sounds in the barn startle him.
I set up inside his stall to paint his portrait. (Link to video on Facebook) He's curious and friendly when I talk to him and offer him some grass.

But he accidentally bumps into the tripod leg, startles. and the whole painting rig goes down into the wood chips. I clean up and set up again outside his stall.

Duncan is a stallion, so even though he's tiny, he may be a little unpredictable around the other horses until he's gelded. Eventually he'll be introduced to the rest of the crew, starting with the mini horses, and then the donkeys.
-----

Published:
Józef Chełmoński (Polish 1849 -1914) studied in Paris and exhibited in the Salon. But after a decade in France, he returned to his homeland in Poland. 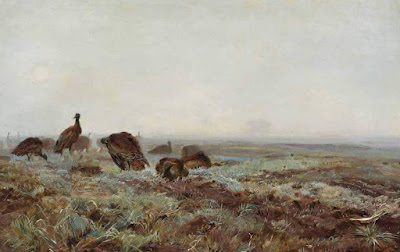 He used his academic skills to paint evocative scenes of the people and the wildlife that he was familiar with.
One of his best loved paintings shows a group of partridges struggling against the wind, surrounded by the bleak, infinite whiteness of the snow and sky.

There's no food or shelter in sight for these small, warm-blooded creatures. The image works on the literal level, but each viewer may identify with it on a figurative meanings, perhaps an expression of human struggle.
The details of their plumage are painted carefully, presumably from actual specimens. Chełmoński creates depth by blurring and obscuring the further individuals. 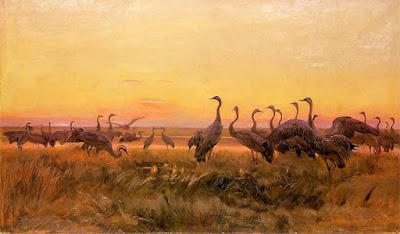 Published:
Rico Lebrun (1900-1964) was an Italian-born painter / sculptor who made important contributions in teaching animal drawing. 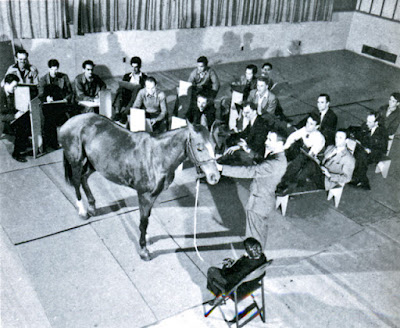 He studied mural painting in Naples and Florence before coming to America. He taught at Chouinard Art Institute and then at the Disney Studios. 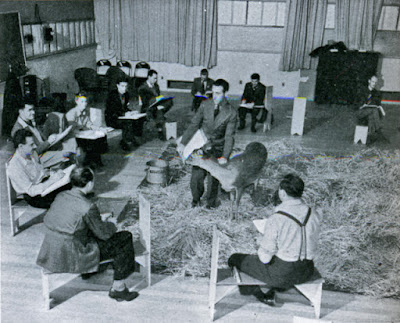 Joining another great teacher, Don Graham, he helped animators understand animal anatomy as they worked on the film "Bambi." 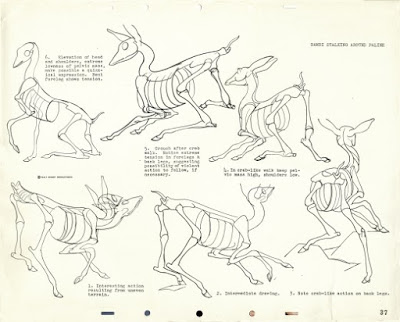 To help Disney's artists, Lebrun created model sheets simplifying the skeleton to a mannikin. He put the mannikins through their paces, emphasizing the flexibility of their spines and the line of action of the poses. 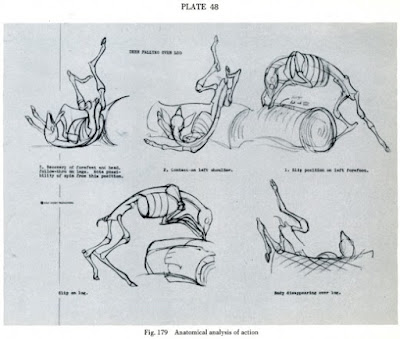 Lebrun was concerned that the animators ground their work in reality. He said, "You really have to go to nature. The little fawn is a pretty big handful in the sense of grace. It's all there. . .the real thing has got it. What you have to do is make a poetical translation of it."
----
Previously: How to Train an Animator/ A Memo from Walt Disney
Two good books: Walt Disney's Bambi: The Story and the Film

Give a Dog a Bone

Published:
I want to paint a portrait of Smooth, the husky mix. I give him a bone, and maybe he'll stay in one place. 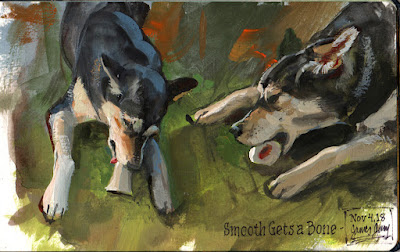 Well, he doesn't hold still, but the bone occupies his attention. 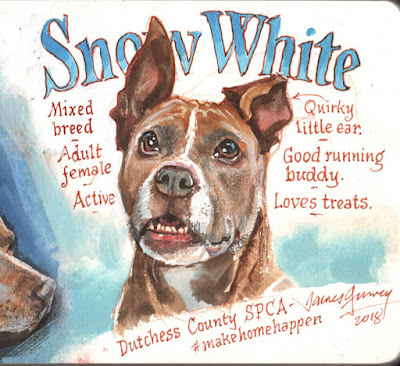 Good news! Snow White, the dog I sketched and shared about on social media, was adopted, after spending over two years in the animal shelter. Thanks to the family that invited her into their home. (Link to video)
-----
Previously: Donald Colley's Dog Sketches
Source: gurneyjourney.blogspot.com
4 Comments+ Sharelabels (1)Flag
AllAnimals

Published:
(Link to video on Facebook)
This is Snow White, a mixed-breed female hoping for a loving home in New York's Hudson Valley area. I sketched her in gouache at the Dutchess County SPCA. 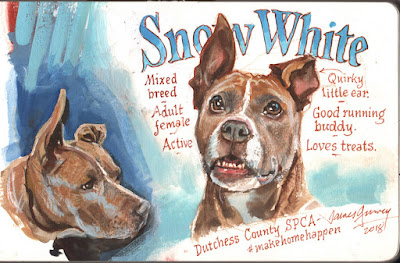 This is one of the first clear videos of the gulper eel, shot from a deep-sea rover on a previously unexplored seamount at the Papahānaumokuākea Marine National Monument, northwest of Hawaii. 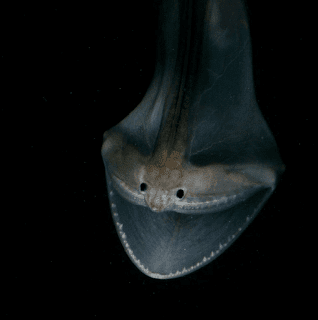 Also called a pelican eel because of its expandable jaws, the gulper has a light-emitting organ on the tip of its tail and can grow up to 6 feet long.
------
Video by E/V Nautilus
Photo by Our Breathing Planet
Source: gurneyjourney.blogspot.com
5 Comments+ Sharelabels (1)Flag
AllAnimals

Published:
What would an ideal animal-painting academy look like? 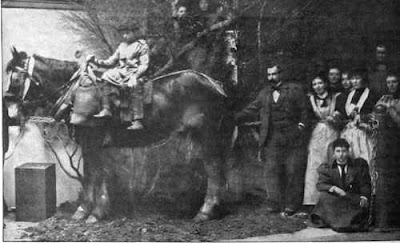 William Frank Calderon (1865-1943) founded a school of animal painting in London in the 1890s. He and his students worked from live animals. 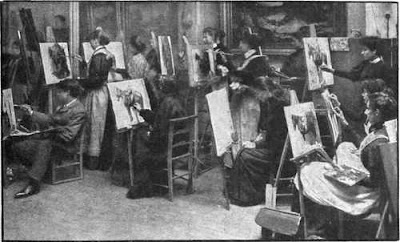 "The studio bustled with horses, dogs, cats, goats and the occasional donkey. At one time, he had five regular dog models, including a fox terrier, an Irish wolfhound, a foxhound and a Russian wolfhound. Students were also encouraged to visit the Zoological Gardens and sketch the animals in natural poses and study the anatomy of their chosen subject." 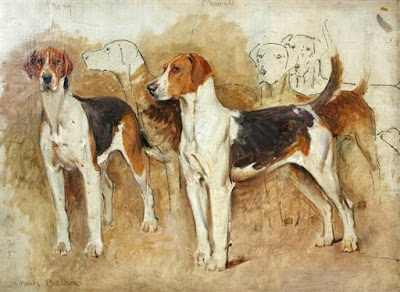 "Calderon also set up a summer school in West Sussex which became a focal point for animal painters who called there both to hone their skills under his guidance and enjoy some time in the country."

"Mr. Calderon warmly encourages the practice of making a number of spirited sketches of a series of chance poses, any one of which can be afterwards worked up if required into a finished picture, the student meanwhile gaining a knowledge of her subject which the most elaborate painting of the model standing in one position for an hour could never give."

"He also had a cast room consisting of plaster snakes, monkeys, armadillos and sheep, and endless horses and dogs, to special parts, such as heads and paws of lions and tigers – as well as many anatomically set up animal skeletons and casts of partial dissections, made by an expert, of a horse and of a calf with the outside skins removed." 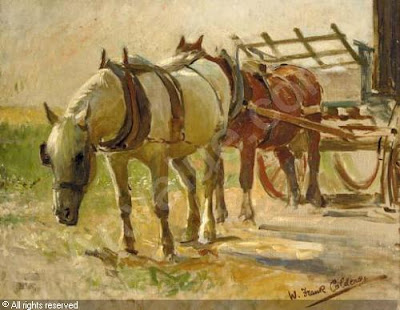 "In 1911 he built a new school in conjunction with his own private house and studio at Kensington. The school was highly influential and many of the great 20th century horse and animal painters studied there. Among his students were Cecil Aldin, Lionel Edwards, Alfred Munnings, Lady Helena Gleichen, Frederick Whiting and George Studdy, besides a good many, who, with already-established reputations came to him from time to time for the special purpose of studying animals. Calderon had a thorough understanding of anatomy and published 'Animal Painting and Anatomy' in 1936, [which] was reprinted in 1975."

(Foregoing quotes are taken from various resources listed below:)

Portrait of a Blue-Ribbon Cow

Published:
"Oakmere Madmax Shasta" is my model for a watercolor sketch. 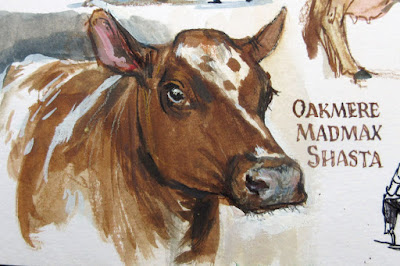 To make my job simpler, I paint her without her rope halter. She's tied up to her stall with enough slack to move around.
As you can see in the video, she is in constant motion compared to a person posing in an art studio. But after watching her for a while, I notice that she returns to a base pose every few minutes.
There are a lot of animals to sketch at the Dutchess County Fair, which is taking place through Sunday August 26, 2018 in Rhinebeck, New York. (Link to video on Facebook)
Check out my video tutorial: "Painting Animals in the Wild"
Source: gurneyjourney.blogspot.com
3 Comments+ Sharelabels (2)Flag
AllAnimalsWatercolor Painting