Ward Kimball, one of Walt Disney's senior animators, answered a request from a high school student who wanted to become an animator. His told the young man that he should graduate high school, then get a well rounded art education:

"To be ready for that jungle out there," he wrote, "you gotta be a jack-of-all-trades. By this I mean, you gotta know all the insides and outs of film making. And with animation in mind this means BASIC DRAWING, LIFE DRAWING, DESIGN, LETTERING, ARCHITECTURE, COLOR THORY, MATERIALS AND THEIR USE, PAINTING, MODELING, ART HISTORY, WORLD HISTORY, ANATOMY, HUMANITIES, FILM EDITING, SOUND CUTTING, RECORDING, STORY SKETCH." 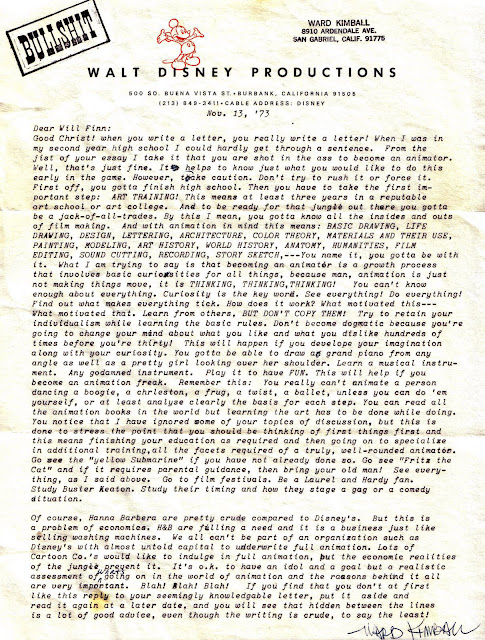 Arcane: Documentary on the Making of an Animated Series

Arcane is an animated series on Netflix based on a video game called League of Legends. The series was a big hit for Netflix and for Riot Games.

It was an artistic breakthrough too, weaving existing characters from the game into compelling story arcs, and mixing 2D and 3D animation in a way that made it look like paintings come to life.

Nine months after release of the TV show, they have released the behind-the-scenes documentary on the story of the making of the show, and the documentary is free to watch on YouTube.
As behind-the-scenes documentaries go, this one covers all the beats: interviews, studio shots, and informal scene setting. They went the extra mile here, with some really intriguing camera angles and settings, and creative editing. There will be additional episodes of this behind-the-scenes series, and the first one ends with a good cliffhanger.
Source: gurneyjourney.blogspot.com
2 Comments+ Sharelabels (1)Flag
AllAnimation 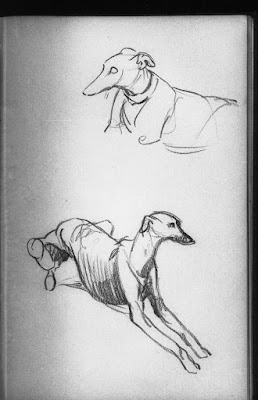 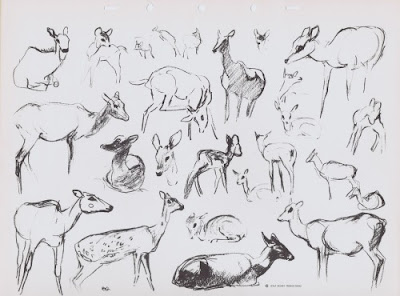 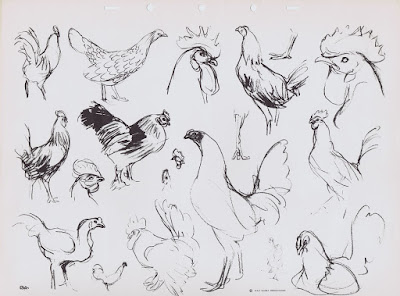 More about Bernard Garbutt on the Deja Vue Blog
Books:
Roger the Rosin Back
Disney Animation: The Illusion of Life by Thomas and Johnston
Thanks, Paulo
Source: gurneyjourney.blogspot.com
2 Comments+ Sharelabels (2)Flag
AllAnimalsAnimation

Tour of Fleischer Studios in the 1930s

Book: Out of the Inkwell: Max Fleischer and the Animation Revolution

The Rise and Fall of Betty Boop

Published:
Let's wrap our five-part interview with toy collector Mel Birnkrant with this question: Did the sensibility behind the Hays Code for movies in 1934 filter down to children's toys or animation in that period? I'm thinking of Betty Boop. Didn't she become less sexy and more cutesy? What examples could you show for this?

Mel says: "The Hays Code literally led to Betty Boop's untimely death. They made her button up her mouth and her dress.  And in the end, even her proportions changed, as she travelled down the road that led to the Uncanny Valley. I just spent a miserable afternoon watching Betty Boops Final cartoons.  Betty’s image is very popular today, but few of those who wear her image on their clothes and fashion accessories actually know her story.

"To put it in a 'mutt-shell,' she began life as a dog, and not a particularly attractive one. Here she is in making her first appearance in a cartoon called Dizzy Dishes. Bimbo too looked different then. 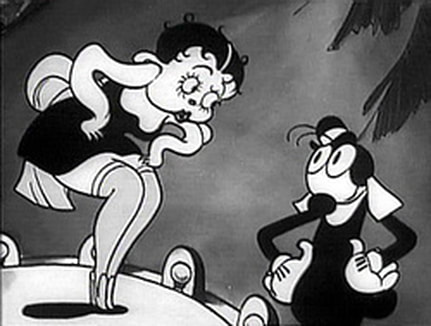 "Soon, Betty transformed into a human. Nonetheless, she still chose Bimbo as her boyfriend.  Here they are, Ahem, in bed. 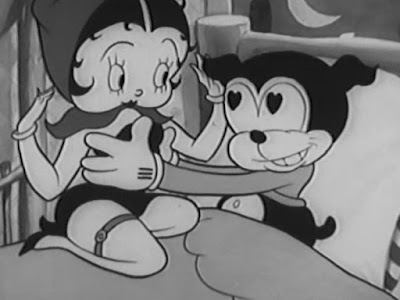 "Soon Betty got much better looking, This image below presents her at her most perfect,  Of all the images of betty Boop this one remains for me the most iconic. I used it on the box for a Betty Boop doll I designed half a century ago. At that moment in time, 1970, she had become virtually unknown. Thus, this was the first Betty Boop product to appear since 1939.  I stumbled across one of these in mint condition on eBay, just the other night. For Twenty dollars I couldn’t resist buying it. 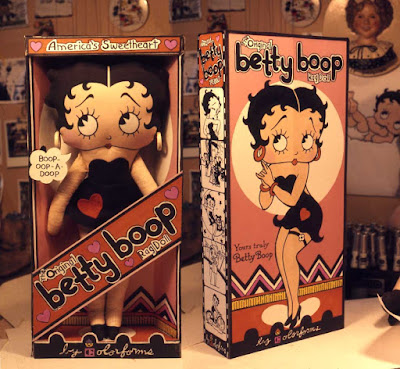 "Betty Boop’s career spanned a short nine years, from 1930 to 1939. Halfway through her journey, in 1934 the Hays Bureau clipped her wings. The comparative drawings below graphically demonstrate how they compelled Betty to change. 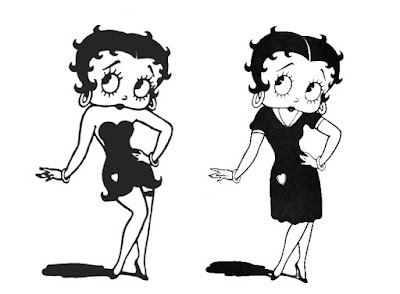 "Nonetheless, she carried on for a five more years with her attire and innocent sexuality toned down. In spite of this, her delightful voice and sparkling personality remained the same. In this latter part of her career, she stopped hanging out with animals and clowns. Bimbo and Koko both disappeared, and her world was suddenly populated with human beings of the same species as her own. She also got a puppy called Pudgy, who often stole the show.  Slowly, it was all downhill from there. 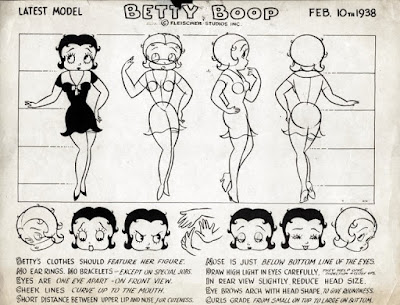 "The official model sheet below conveys how Betty had changed by 1938. Her head became much smaller, she also became taller, and her proportions were more conventional.  Her original outrageously stylized proportions had been easier to accept than this newer version. Now with a body that was more anatomically correct, her slightly oversized head seemed uncomfortably out of place.. 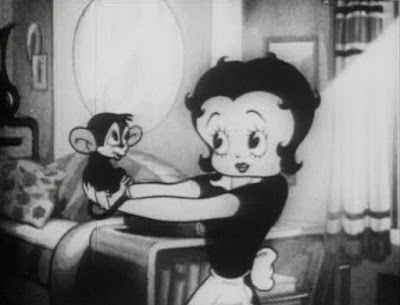 "Bettys final cartoons are hard to watch.  In this one from 1938, Betty, looking spanking clean, attempts to discipline a monkey. That was a high point compared to what was to follow in 1939. 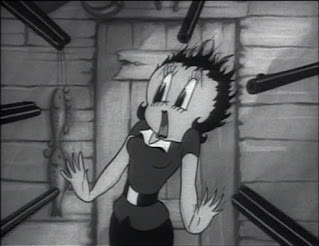 "In a short titled, “Musical Mountaineers,” Betty encountered hostile hillbillies who were definitely not of the Beverly Hills variety. Fortunately, she survived, Her career was not so lucky. 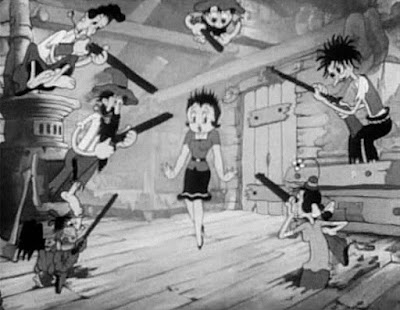 "Worse still, was a 1939 cartoon called, Rhythm On The Reservation. By any standard it would be considered outrageously racist. In it, Betty wins over a menacing tribe of Native Americans by teaching them how to play musical instruments.  This image reveals how dramatically Betty’s look had changed. 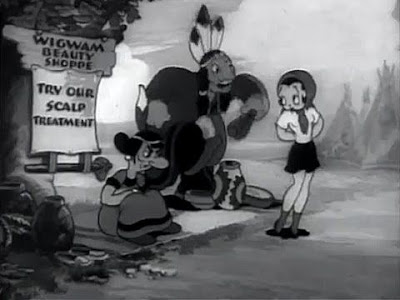 "In what amounted to the final indignity, the studio forced Betty to introduce her own replacement, “Sally Swing.” It appears that the studio saw Sally as a big deal. 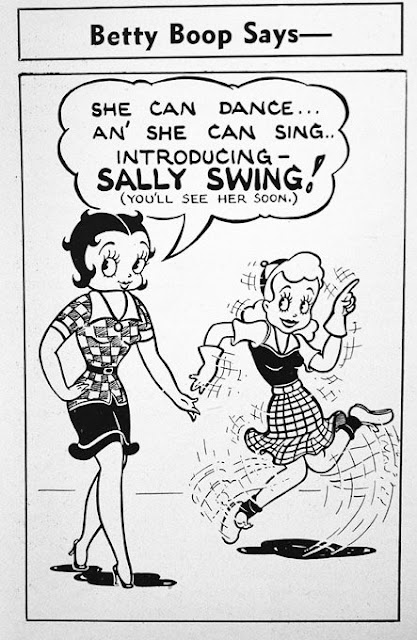 "They even created a poster for her. They hoped that Sally would take Bettys place for the next decade. Sally’s voice was purported to be that of 15 year old Rose Marie. 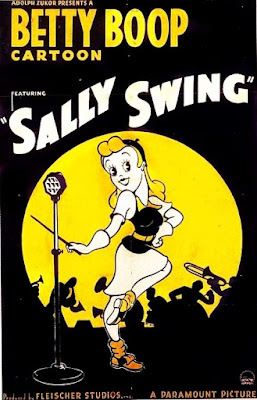 "Here we see the two of them together, along with Sally’s poster, upon which Betty appears in name only."

Thanks, Mel Birnkrant for sharing these fascinating guest posts about popular culture in the 1930s. For more stories of vintage character toys and the art of toy invention, visit his website.

Part 4: What They Cut from King Kong

Published:
in this 1963 short, comedian Mel Brooks is the voice of a skeptical character looking at abstract moving shapes in a crowded theater. (Link to YouTube)
Source: gurneyjourney.blogspot.com
1 Comments+ Sharelabels (1)Flag
AllAnimation

The Sphere in Character Models

Published:
Classic characters from 1930s animation often used a ball for the head or the pelvis. 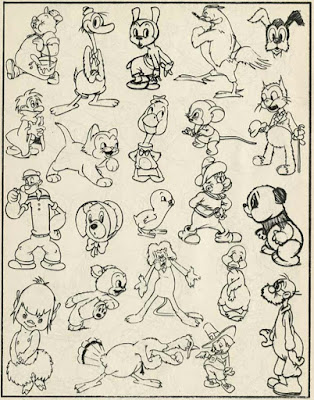 A good source of this style is the 1936 book Cartooning Self-Taught by Otto Mesmer, which shows heads, hands, and body shapes based on circles or spheres.
---
Read Cartooning Self-Taught on Archive.org
More about this book at CartoonSnap
Essay by Mel Birnkrant about the Art and Imagery of Comic Characters
Source: gurneyjourney.blogspot.com
5 Comments+ Sharelabels (1)Flag
AllAnimation

Published:
The 1930s was a time of economic depression, but it was also the decade when cartoon animation went through its greatest period of creative experimentation and audience enthusiasm.

(Link to video on YouTube) Today we read a lot about Disney and Warner Bros (Looney Tunes), but not as much about other studios, such as Fleischer, Screen Gems, Walter Lantz, Terry Toons, and MGM.

For example here's a short MGM film about a conductor trying to work with an uncooperative orchestra. Director Friz Freleng, started at Disney and Warner and left for a period to work at MGM, later returning to Warner Bros. He was always fond of tackling musical comedy, with unerring timing and an understanding of stage performance. His friend, animator Hugh Harman, gives the animation some fun character moments and over-the-top action. 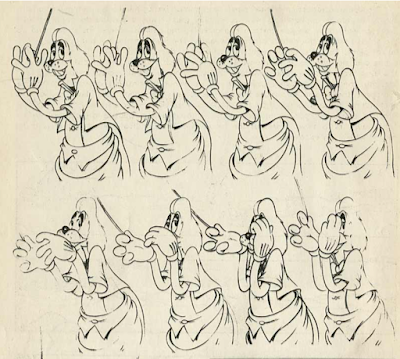 The "rubber hose" style of animation makes the character feel fluid and dynamic.
These drawings come from a 1941 book How to Make Animated Films by Nate Falk, which summarizes the state of the art and the business at the end of the decade. It's available as a free download on Archive.org or as a physical book from Amazon.
Edit: The music is an overture written by Franz von Suppé (1819-1895) called "Ein Morgen, ein Mittag und ein Abend in Wien," (A morning, a noon and an evening in Vienna). Here's fiery version conducted by Zubin Mehta.
Source: gurneyjourney.blogspot.com
6 Comments+ Sharelabels (2)Flag
AllAnimationComics/Cartooning

Miyazaki: Digging into the Subconscious

Published:
Animation director Hayao Miyazaki said: “I try to dig deep into the well of my subconscious."

"...At a certain moment in that process, the lid is opened and very different ideas and visions are liberated. With those I can start making a film.”
"But maybe it's better that you don't open that lid completely, because if you release your subconscious it becomes really hard to live a social or family life.”
"You must see with eyes unclouded by hate. See the good in that which is evil, and the evil in that which is good. Pledge yourself to neither side, but vow instead to preserve the balance that exists between the two.”
----

The Art of Spirited Away

The Art of Princess Mononoke

The Art of My Neighbor Totoro: A Film by Hayao Miyazaki

Published:
(Link to YouTube)
Richard Williams has died at age 86. He animated Pink Panther, produced a 1971 adaptation of Dickens' A Christmas Carol, and developed the animation for Who Framed Roger Rabbit?

Perhaps his biggest contribution, though, was as a teacher. He had a huge base of knowledge, which he shared freely and cheerfully with a younger generation.

He learned the craft directly from Disney greats like Milt Kahl and Art Babbitt, as well as Warner Bros. talents like Ken Harris, who animated Bugs Bunny during the golden years, and later came to work with Williams in London.

All of that information is compiled in his excellent instructional book The Animator's Survival Kit. The book contains a wealth of drawings illustrating all the principles of animation and is considered the classic instructional text in that field.
----
Book: The Animator's Survival Kit: A Manual of Methods, Principles and Formulas for Classical, Computer, Games, Stop Motion and Internet Animators