Cabin in the Catskills 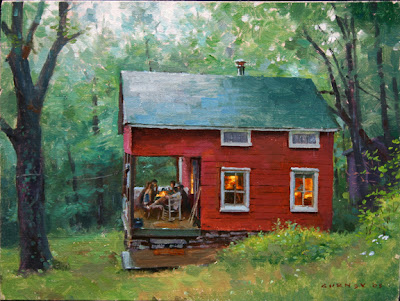 Platte Clove is a V-shaped valley that slices into the western face of the Catskill Mountains in New York State. Some wildlife biologists consider it the wildest tract of land in the Northeast. Because of the sheer cliffs and plunging cascades, the DEC has decided to cut no official trails into the gorge. Cars can reach the top only by a single-lane road that is so treacherous that it is open only from May to November.

At the top of the clove, nestled above a 100-foot cascade called Plattekill Falls, is a little red cabin built in 1840. It has been granted the modern blessing of four or five electric light bulbs and a socket or two, but it is innocent of plumbing. The cabin is owned by the Catskill Center for Conservation and Development (www.catskillcenter.org), which has established an artist-in-residence program. Painters, writers, and others haunted by the muse can work in the magic spell of the clove, the very spot where Washington Irving reportedly received his inspiration for Rip Van Winkle.

I was thrilled to have been chosen for a week-long residency. Today, along with Jeanette, Franklin, and my parakeet Kuky, I’m on my way up the mountain in our old family van named Trusty Rusty.
(The painting was done outdoors at twilight during my last stay at the cabin in 2005.)
Source: gurneyjourney.blogspot.com
6 Comments+ Sharelabels (2)Flag
AllCatskill MountainsPlein Air Painting