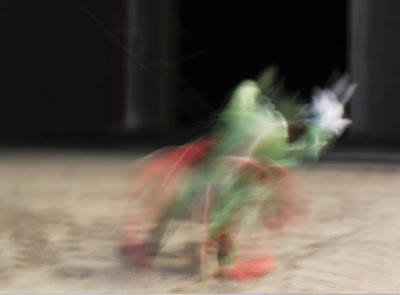 Think Outside the Box

Published:
Whenever I hear a self-help cliché, like "Get our ducks in a row," I can't help thinking of the metaphor literally.

When someone says we should "think outside the box," I imagine what Mrs. Basher would do. (Link to video) 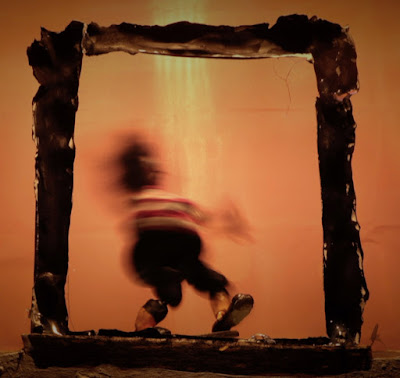 If you watch closely, you may glimpse a few frames like this, where the motion blur gives a different spice to the action.
Source: gurneyjourney.blogspot.com
1 Comments+ Sharelabels (2)Flag
AllAnimationClementoons

In the new end credit sequence, the three main characters in the Clementoons universe are Clement, Mrs. Basher, and mini-monster Sprocket.
Each of them is represented by a set of a dozen or so different sculpts, and each sculpt has a specific range of movements. 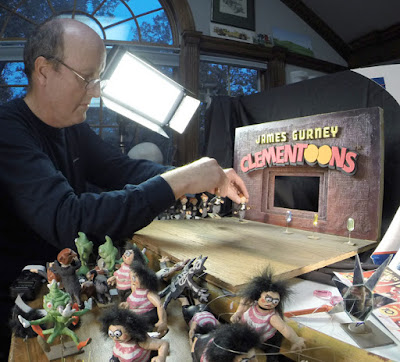 The style of action is inspired by video games. You might notice flashes of light with the zap rays (using mirrors), and little cloud puffs (using sculpted white blobs on wires) when Clement lands.
To get those little power-up gemstones moving, I turn beads on wires a fraction of a turn with each new exposure. 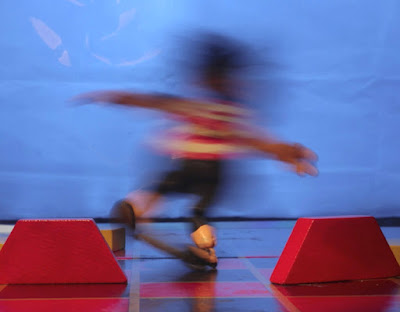 I puppeteer some of the poses with the camera set for a slow shutter speed to get motion blur in each frame of the fast action sequences. This gives the stop motion a different look and opens up a range of possibilities. 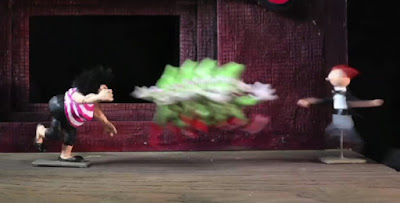 This kind of animation is fast to execute. You can animate about 10 seconds per hour, while in normal hand drawn or stop motion animation that much footage would take a week or two.
-----
Source: gurneyjourney.blogspot.com
2 Comments+ Sharelabels (2)Flag
AllAnimationClementoons 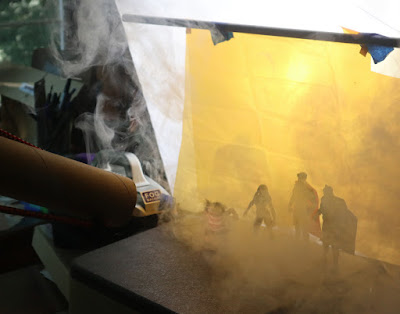 Technical notes: The lighting setup is a yellow gel in front of a soft box, with a cardboard snoot on the key light. Smoke is from a party fogger, and the camera (@60fps slowed by half) moves on a homemade radius dolly. Music by Kevin MacLeod.
Source: gurneyjourney.blogspot.com
3 Comments+ Sharelabels (2)Flag
AllAnimationClementoons

Walking under a ladder

What's the best way to walk under a ladder? Watch how Clement does it.

Published:
Here's a teaser trailer for The Living Sketchbook™ app, releasing Monday, March 20 for iOS and Android devices. (Link to YouTube video)
-------
UPDATE:
The app is now available for iOS on Apple phones and tablets at the App Store
and for Android devices at Google Play
-------
FREQUENTLY ASKED QUESTIONS
Sharon Cullen: "CANT WAIT! What does the app do exactly? Is it video clips of you?﻿"
Hi, Sharon—it lets you look through every page of one of my sketchbooks. You can pinch to zoom to see close-up details, while listening to audio of location sounds and my commentary about materials and methods. Plus for some of the sketches you can watch videos shot on location. It makes a sketchbook come to life in a new, immersive and interactive way.﻿
What devices will the app be compatible with?
Android 4.3 KitKat and above
iOS 9.0 and above
Compatible iOS devices:
iPhone 5s and above
iPad Air and above
iPad Mini 2 and above
iPad Pro and above
iPod Touch sixth generation and above
How much will it cost and what are the plans for the app?
The app will cost $4.99. The sketchbook "Boyhood Home" is the first volume in the series. More sketchbooks will be released later as additional apps. 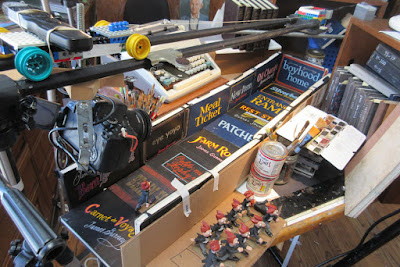 Sunila asks: "I wonder... are you also using one of these egg timers to activate the dolly?"
The dolly is pulled along a homemade dolly track made of two metal broomsticks that I got from the dollar store. Movement is generated by a geared-down Lego motor at a velocity of 1 inch per minute. The camera hangs below the cart and shoots at 5 second intervals using an intervalometer

, which is strapped on top of the Lego cart.
Johnny Matthias: "I don't know what I was watching, but it looked pretty cool. A Lego rotoscope? Sculpey or 3D-printed figures in a walk cycle? You have all the cool toys.﻿"
It was a series of 10 hand-sculpted replacement-animation walking poses of my character Clement. I animated it on a timer, changing the poses every 15 seconds, which results in three frames of video. This method of stop motion animation goes very fast; I shot the whole animation in 40 minutes.
FEEDBACK FROM THE PROS
''James Gurney's Living Sketchbook: Vol. 1 celebrates the mobility and charm of gouache, casein, colored pencil, and pen and ink in sketchbook form. This brilliant app is loaded with beautiful high resolution artwork set to a powerful environmental soundscape that brings you there. The narration is full of insightful observations and wisdom to pass on to artists of all levels. Additional layers of video are dispersed in the volume to clearly illustrate approaches by a master teacher and storyteller. An elegant and generous offering that will immediately make you want to sketch out ‘in the wild'!"
—Erik Tiemens - Watersketch.com

"Once again, James Gurney sets the bar for showmanship art, inviting you beyond the final image into the mind and imagination of the artist who created it. His 'Living Sketchbook' App takes a classic Gurney Sketchbook and adds audio, video, and written notes on the inspiration, palettes, and thinking behind the art. It's as if you were a friendly ghost watching the creation of every page. Sketchbooks are often described as snapshots of an artist's soul, giving this App an intense feeling of intimacy. Another small masterpiece of art and technology from Gurney Studios.”
—Iain McCaig, concept artist for Star Wars, Jungle Book, Avengers
------
The Living Sketchbook app was designed and developed by my son Dan Gurney.
Source: gurneyjourney.blogspot.com
6 Comments+ Sharelabels (3)Flag
AllAnimationClementoonsLiving Sketchbook

Line of Action in Art 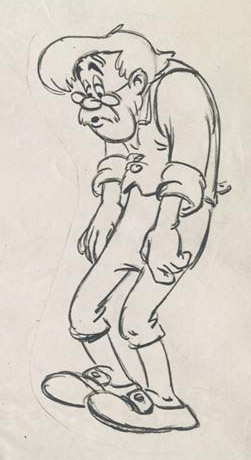 The "line of action" is a simple, usually curving, line that travels through all the forms of a pose. A Disney animator, possibly Bill Tytla or Art Babbitt, used an S-shaped line passing through the pose of this character model drawing of Geppetto from Disney's Pinocchio. 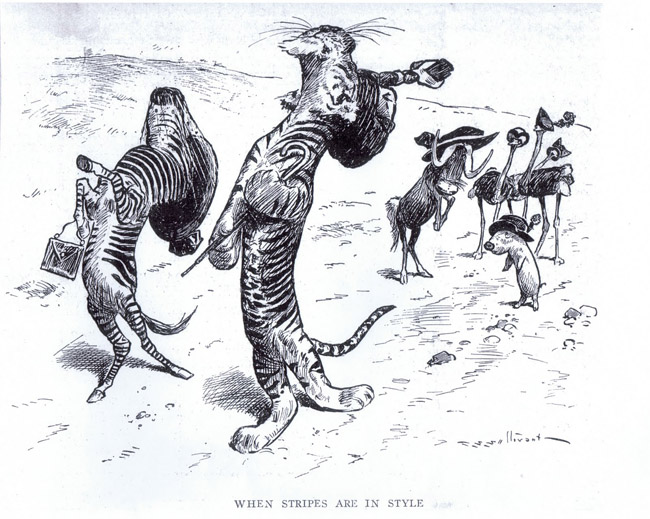 Other artists have applied the principle, including the cartoonist T. S. Sullivant (1854-1926), who was a big influence on the Disney animators. 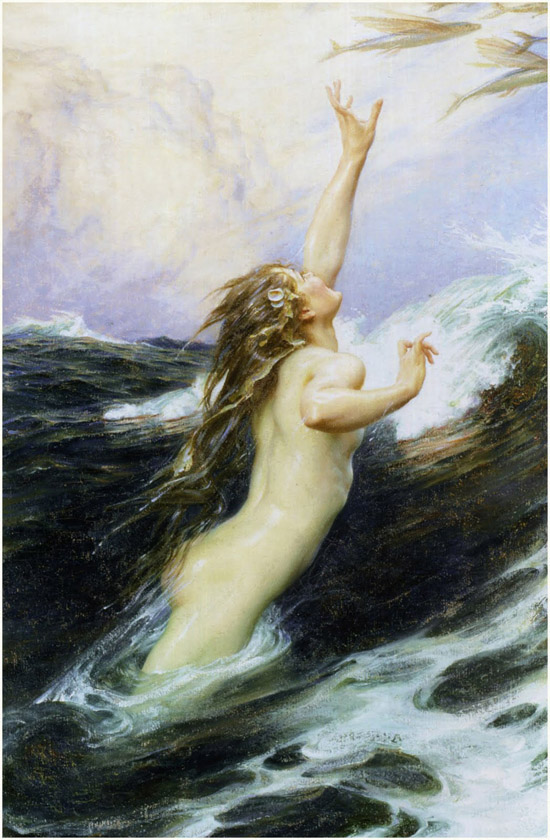 Here's another example from a Victorian painter, Herbert Draper (1863-1920), in his canvas "Flying Fish."
Feel free to leave links of other examples in the comments.
-----
Previous post on Line of Action, with Preston Blair examples
More in the books:
Cartoon Animation by Preston Blair

Clement on the Can — New CLEMENTOONS Adventure

Published:
In this brand new episode of CLEMENTOONS, Clement makes a sled out of a crushed soda can and embarks on a wild ride. (Direct link to video)

CLEMENTOONS is my stop-motion animated adventure series about a little cartoon person on a perilous journey through the real world to the toyland of Melville. 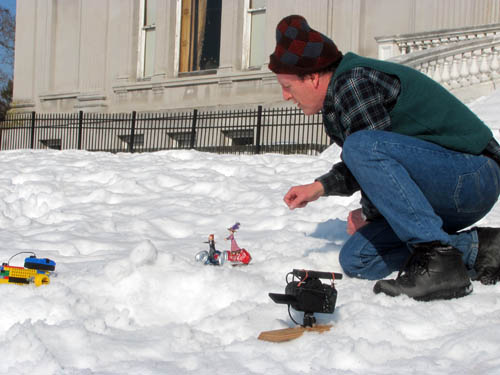 The animation is painstakingly shot frame by frame and then compiled into a movie. In this shot, a geared-down Lego motor pulls the sleds at a constant but very slow rate, while a still camera shoots at five second intervals. 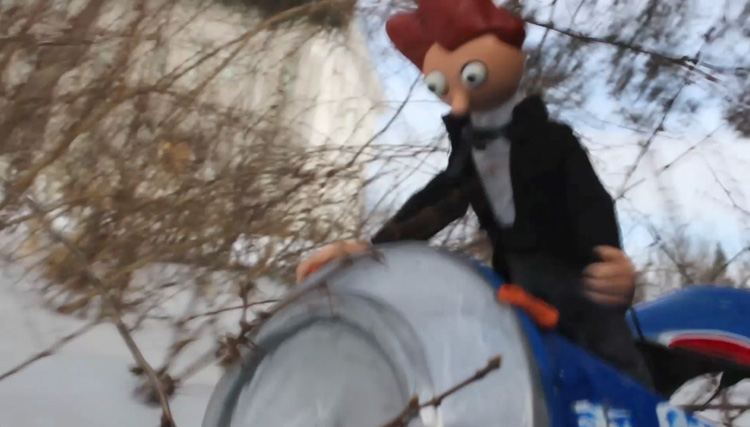 There's no green-screen and no digital effects. When Clement goes through the brambles, he's really going through them.

The episodes will be released out of order. Each one begins with an escape and ends with a cliffhanger.
------
Previous videos:
Clement Meets Miss Bubbles
Clementoons: Behind the Scenes
Song by Frankie Trumbauer "There'll Come a Time," 1927,
Clementoons theme music by The Yanks, "If There Weren't Any Women in the World"
Source: gurneyjourney.blogspot.com
5 Comments+ Sharelabels (2)Flag
AllAnimationClementoons

Published:
On Monday morning, I'll be releasing the first full installment of Clementoons animation, an episode called "Troubles with Bubbles." 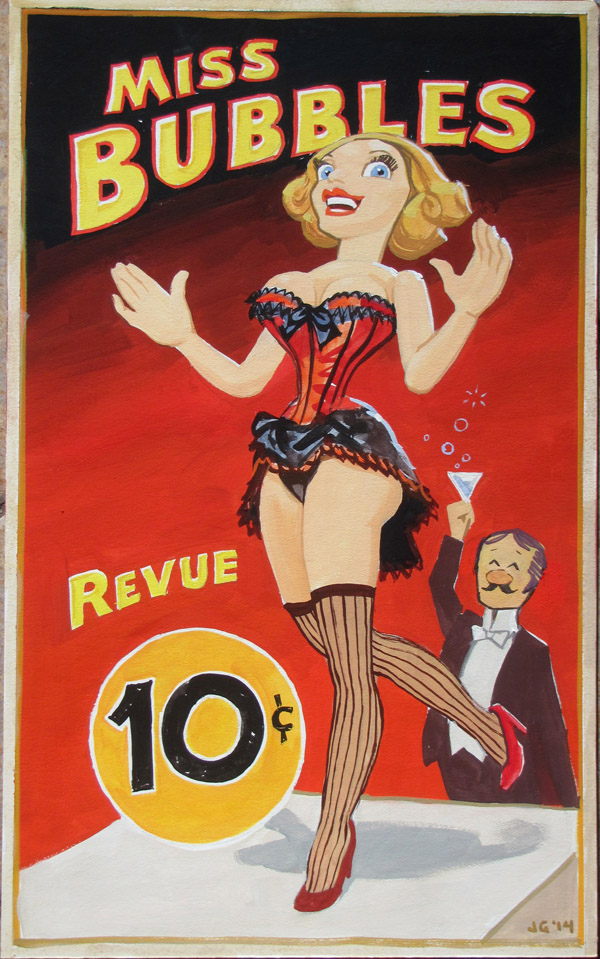 The video features Clement's encounter with a dancer named Bubbles LaRue. She's ten times Clement's size, and she's the most beautiful and dangerous female in Melville, the world of cartoon people. I created this poster as a prop for the production. It's painted in casein on illustration board.

I based the style of the poster on the classic posters of the Moulin Rouge, with their fabulous swooping lettering, bright colors, and sense of excitement. 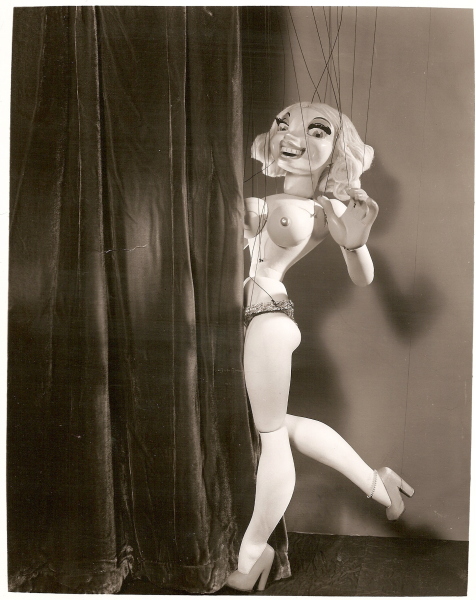 Miss Bubbles is a marionette, originally built and performed by Bil and Cora Baird, the puppeteers who created the goatherd scene in "The Sound of Music" (link to that scene on YouTube).

I'd like to introduce a behind-the-scenes tour of CLEMENTOONS, the animation technique I've been developing to tell the story of Clement. (Direct link to YouTube video)

Clement is a bold little guy, but he's always getting himself into trouble. He's on a journey through our ordinary world to a magical place called Melville, where cartoon people have congregated to form a surreal society.﻿

He'll meet plenty of other characters along the way. I'll release the next episode, "Clement on the Can" later this month.
Source: gurneyjourney.blogspot.com
13 Comments+ Sharelabels (2)Flag
AllAnimationClementoons