Published:
How we name and separate the colors on the color wheel is a subject with roots in physical science, visual perception, and artistic tradition. That’s what I’d like to explore over the next seven posts. The color wheel is our mental map of the color universe.

This may seem like boring review, but if you read all the posts this week, you may end up completely rethinking the color wheel—at least that’s what happened to me.

When white light is bent or refracted by a prism or a rainbow, it separates into a continuous gradation of colors. Within that smooth spectrum, there’s no clear division between the colors. Sir Isaac Newton (1642-1727) proposed wrapping the spectral colors around a circle by merging the two ends, red and violet. The result was a hue circle, better known as a color wheel. 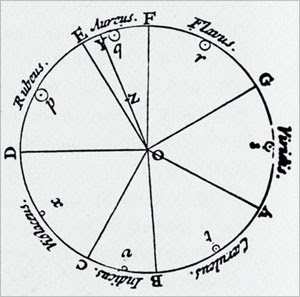 Newton observed that the hues gradate smoothly into each other. But in his diagram he identified seven colors we’ve come to know as ROYGBIV (red, orange, yellow, green, blue, indigo, and violet). The tradition among artists has been to drop the indigo and to concentrate on six basic colors.

Tomorrow we’ll look at the colors that Newton and his contemporaries called “primitive” and which we call “primary.”
--------
Reviewing the posts in this series:
Part 1: Wrapping the Spectrum
Part 2: Primaries and Secondaries
Part 3: Complements, Afterimages, and Chroma
Part 4: Problems with the Traditional Wheel
Part 5: The Munsell System
Part 6: Cyan, Magenta, and Yellow
Part 7: The Yurmby Wheel
Source: gurneyjourney.blogspot.com
23 Comments+ Sharelabels (1)Flag
AllColor and Light Book

Published:
The people have spoken! In the Color and Light book cover poll, there were 744 votes in all, and here’s how they were distributed.

So we’re going to go with the sleeping dino, which happened to be my favorite, too. For those of you who wanted the street scene, don’t be disappointed—we'll show it uncropped on the back cover. The lamplight, birdman, and sunset scenes will appear inside the book with about 300 other color illustrations.

It was an amazing experience to read all 114 of your comments. Perhaps because you’re all so visually sophisticated and articulate, you managed to verbalize all the vague hunches and considerations that were lying half-dormant in my brain, plus you pointed out many angles I never had thought of. The folks at Andrews McMeel were impressed with you all, too. So thanks again, and I’ll keep you posted.
Source: gurneyjourney.blogspot.com
7 Comments+ Sharelabels (1)Flag
AllColor and Light Book

More About the New Book

Published:
Thanks so much to all of you for your insightful comments and votes on yesterday’s post about the cover design for the upcoming book on color and light.

In this post I wanted to tell you more about how I came to write the book, and what’s in it.

When I was in art school I took a color class that consisted of painting a lot of flat swatches, cutting them out with a sharp knife, and pasting them down into color wheels and gray scales. I spent months learning how to paint perfectly smooth swatches and trying to get the steps between them exactly even.

At the end of each day I would leave the classroom and look up at the colors of the sky, the trees, and the water around me. The sky was not composed of adjacent flat colors, but rather of an infinite variety of gradating hues. Why did dark colors turn blue as they went back toward the horizon——except in a few instances, such as in the photo below, when a setting sun casts the far vista in orange light? Why did the leaves have a sharp yellow-green color when the light shined through them, but a gray-green color on top? 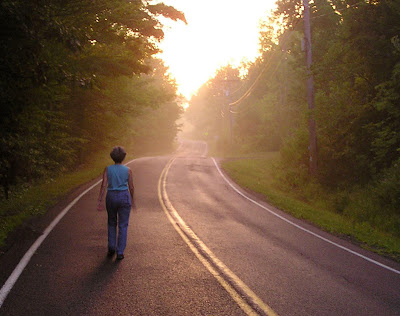 In school I was learning valuable skills about how to see and mix color, but I had no idea how to apply this experience to real-world painting problems. Color theory seemed more like a branch of chemistry or mathematics, a separate science that had little to do with making a realistic painting. I felt like a piano student who had played a lot of scales, but had never gotten around to the melody.

If there were answers to my questions about how color interacts with light, atmosphere, water, and other materials, I would have to find them in fields like physics, optics, physiology, and materials science. I started digging back into art instruction books from more than 75 years ago, when it was taken for granted that artists were trying to create an illusion of reality. Artists as far back as Leonardo da Vinci were struggling to explain the workings of the visual world around them. Each old book had its vein of gold, but the information needed to be translated and updated for our times, and the old theories needed to be tested against recent scientific discoveries.

I investigated recent findings in the field of visual perception and found that many of my assumptions, even about such basic things as the primary colors, were mistaken. I learned that the eye is not like a camera, but more like an extension of the brain itself. I learned that moonlight is not blue, it only appears blue because of a trick that our eyes are playing on us.

During the last few years, since the release of Dinotopia: Journey to Chandara, I have taught workshops at a lot of art schools and movie studios. I have also kept up this blog, which explores the working methods of contemporary realists, academic painters, and Golden Age illustrators. I adapted some of the blog content into my recent book, Imaginative Realism: How to Paint what Doesn’t Exist. As I assembled that volume, I realized that the information on color and light was so extensive—and so popular with you blog readers—that I decided to save it for a second volume.

This book (Fall, 2010, Andrews McMeel, 224 pages) will begin with an illustrated survey of historic masters who used color and light in interesting ways. Those paintings are a tough act to follow, so I’m a little nervous about using my own paintings to fill the rest of the volume, but at least I can talk knowledgeably about them. Chapter 2 will examine the various sources of light, and we’ll look at how light creates the illusion of three-dimensional form. Then I’ll cover the basic properties of color as well as an introduction to pigments and paints. Chapters 6 and 7 present the method I use called color wheel masking or gamut mapping, which helps the choosing of colors for a given picture.

The last chapters of the book will deal with specific challenges that we face when we paint textures like hair and foliage, and some of the areas where we’ve learned from our digital colleagues, such as subsurface scattering, and caustics. After that we’ll look into the infinitely varied phenomena of atmospheric effects: including aerial perspective, fog, dappled light, sunbeams, rainbows, sunsets, and reflections. The book ends with a glossary, a pigment index, and a bibliography.

The book won’t contain recipes for mixing colors or step-by-step painting procedures. My goal is to bridge the gap between abstract theory and the practical knowledge needed by realist painters. I also want to cross the divide between observational color experience of the plein-air artist, and the imagined color of the fantasy artist. I would like to cut through the confusing and contradictory dogma about color, to test it in the light of science and observation, and place it in your hands so that you can use it for your own artistic purposes.

I believe color and light are the artist’s most fundamental tools. Whether you work in paint or pixels, fact or fantasy, or you’re a non-artist who is curious about the workings of the visual world, I want this book to bring color and light down to earth for you.

Cover Poll Update
If you haven’t voted on the cover design yet (scroll down), the polls will stay open until tomorrow noon. I should add that I just stuck the title typography in there really quickly, and I used the same font on all of them so that hopefully the voting would be based on the images, not the graphic type fonts and colors. That will ultimately be handled by the brilliant graphic designers at my publisher, Andrews McMeel.
Source: gurneyjourney.blogspot.com
28 Comments+ Sharelabels (2)Flag
AllColorColor and Light Book