BBC / Apple TV teased a sneak peek of Prehistoric Planet, narrated by David Attenborough. It mixes what appears to be live-action footage of hatchling turtles with computer-generated dinosaurs.

The dinosaurs are introduced out of focus as they were captured by a lens with shallow focus. The animators showed the killer instinct of the young T. rex as ice timing and storytelling, too. The animation shows a convincing sense of weight and momentum, not always easy to achieve in CGI.

Car-sized monster amphibian Koolasuchus has been chosen by public vote as the state fossil emblem of Victoria, Australia.

It was one of the subjects of the "Australia's Age of Dinosaurs" stamp issue that I designed for Australia Post. 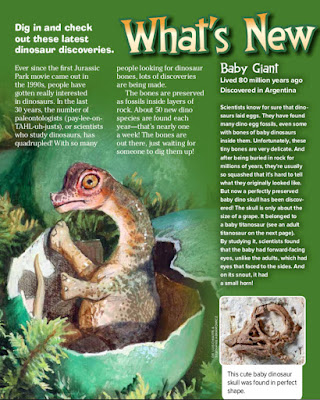 Scientists found a skull of a baby sauropod dinosaur that was about to hatch out of its shell, and my job was to imagine the moment it was emerging from its shell. 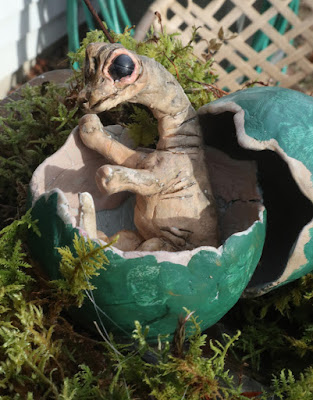 I made a quick maquette of the little hatchling out of Sculpey and made the two halves of the shell using Magic Sculpt, a two-part epoxy sculpting compound. Photographing the setup in a bed of moss gave me plenty of visual information to incorporate into the oil painting.

If you haven't already watched it, here's the YouTube video about the whole process.
The painting appears in the April 2021 issue Ranger Rick magazine.
Source: gurneyjourney.blogspot.com
1 Comments+ Sharelabels (1)Flag
AllDinosaurs

Creating a Maquette to Visualize Borealopelta

Painting the "Reaper of Death"

This dinosaur is called Thanatotheristes, which means “reaper of death.”

Before launching into the finished painting I try out various background treatments on a small preliminary sketch—the sketch in the upper left of the array of four color sketches below. 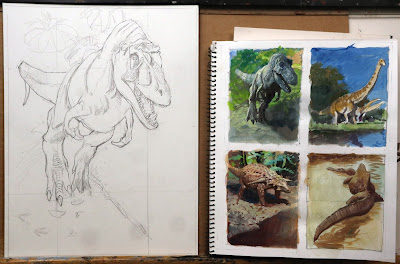 The sketch lets me try out color combinations before launching into the finished painting. 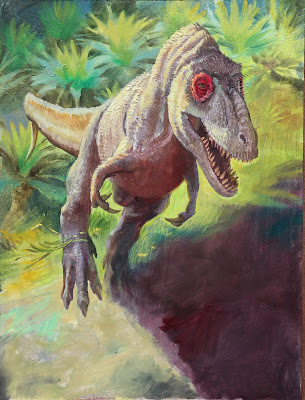 By the time I’m ready to start the final, I feel more confident about my color choices. 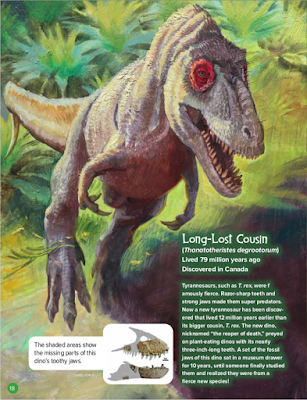 Published:
Anyone who thinks predatory dinosaurs don't look intimidating with feathers should have a look at the bearded vulture.
The bearded vulture feasts mainly on bones, which it digests with the strong acid in its stomach. They acquire a reddish tinge either from the blood of a carcass or reddish dirt, which they're instinctually attracted to rubbing into their feathers.

However these carrion feeders have been known to be good human companions in captivity.

Thomas Littleton Powys, the 4th Baron Lilford (1833-1896) raised a couple of bearded vultures at his home estate and found them to be "tame and perfectly harmless; indeed, with the exception of a few playful attacks on trousers, gaiters, petticoats and boots, I never heard of any malice on their part towards any living creature."
----
More at Mental Floss and 41 Strange:
Source: gurneyjourney.blogspot.com
5 Comments+ Sharelabels (2)Flag
AllAnimalsDinosaurs

Gouache as a Rehearsal Medium

Published:
Here's a new teaser for the upcoming article about T. rex coming up in the April issue of Ranger Rick. (Link to YouTube)


I do two quick sketches in gouache before launching into the final oil painting. I paint them over a scan of the line drawing, greatly reduced in size, printed out on my copier, and sealed with acrylic matte medium. 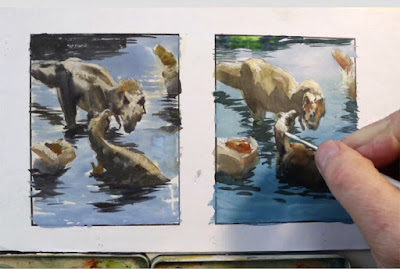 These gouache sketches serve two purposes. First, they help me imagine what the final result might look like. And second, they serve as a trial run, allowing me to rehearse the painting sequence.
I'll be releasing a full length tutorial download in a couple of weeks called "Unconventional Painting Techniques in Oil," intended for all sorts of painters, not just dino-artists. The focus will be on unusual ways of applying the paint to achieve naturalistic effects.
---
Ranger Rick Magazine website
Source: gurneyjourney.blogspot.com
8 Comments+ Sharelabels (2)Flag
AllDinosaursGouache

Published:
In a shallow stretch of a freshwater stream, an adult Tyrannosaurus rex introduces three juveniles to the water and supervises them while they bathe.


I develop the scenario after watching YouTube videos showing the bathing behaviors of ostriches, emus, and cassowaries, plus a lot of kinds of birds. First they squat down into the water, then stretch upward and shake, followed by self-preening. The juveniles still have their light coloration and haven't yet molted into their adult layers of feathers.

The feathers are based on the fact that all members of the tyrannosaur group which have been found with detailed fossils (such as Dilong and Yutyrannus) show feathers. Among my scientific consultants was tyrannosaur expert Steve Brusatte, who said: "I am particularly really moved by the one of the adult and juveniles bathing in the stream. It brings these predators to life in a way that hunt scenes don't--it makes them seem more like normal animals, not monsters."

This oil illustration is coming up in the April issue of Ranger Rick magazine. (Link to video)
Source: gurneyjourney.blogspot.com
1 Comments+ Sharelabels (1)Flag
AllDinosaurs

Published:
My oil painting "Kosmoceratops" will be one of the paintings in the Gold Medal Exhibition of the California Art Club, which starts this weekend. 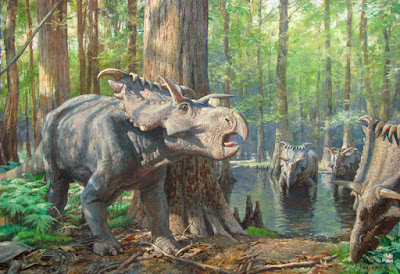 The painting was published in Scientific American magazine and received a Jury Award at the Focus on Nature XIII exhibition in Albany, NY. It was also the subject of my first downloadable tutorial video, "How I Paint Dinosaurs."

(Link to video on Facebook)
The Gold Medal Exhibition takes place at the Natural History Museum in Los Angeles. The collector's preview and the artists' gala is Saturday, June 9 and the show opens to the public from June 10 through July 1.
-----
Gold Medal Exhibition of the California Art Club
Tutorial: How I Paint Dinosaurs
Source: gurneyjourney.blogspot.com
4 Comments+ Sharelabels (1)Flag
AllDinosaurs

Beside a Triassic Pond

Published:
The scene is a forest pond, with several croc-like metoposaurids called Koskinonodons basking in the shallows, absorbing the warmth of a patch of sunlight.
The flora is a mix of cycads, tree ferns, horsetail ferns, ginkgo, and other Triassic plant forms. Meanwhile, a small group of dinosaur precursors emerge tentatively from the shadows, hoping to get a safe drink.
The giant amphibians usually eat fish, but they'll snatch an unwary dinosaur. Dinosaurs don't rule the world—they live at the margins. 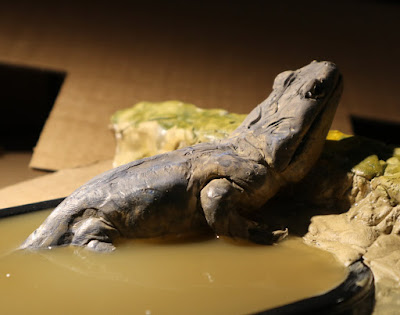 It's mid-winter as I prepare for this painting, which appears in the current (May, 2018) issue of Scientific American Magazine. There's a foot of snow on the ground, and we're hit with a total electrical blackout that lasts for days.
But since my methods are mostly old-school, I'm able to sculpt a maquette using Sculpey

for the metoposaurid and Model Magic

for the bank. I fill a take-out container with muddy water, and set the creature in a basking position. The maquette helps me understand where light turns to shadow and where to place the highlights.
------
The Unlikely Triumph of Dinosaurs by Stephen Brusatte in Scientific American
Check out my DVD How I Paint Dinosaurs