Copies from the Masters, Part 2

Published:
As an exercise before a day of composing, Chopin would spend an hour or two playing music from Bach’s Well-Tempered Clavier. When he played Bach’s music he felt he absorbed the master through the pores in his fingertips.

Why don’t we do the same thing as artists? Maybe it’s because we’re taught that it’s bad to copy someone else’s work. And we’re justifiably concerned about becoming an imitator of someone else’s style.

But there’s nothing at all wrong with copying as a way to practice and learn. It’s the shortest path to understanding. The safeguard against becoming derivative is to copy several different artists side by side to see how many ways there are to solve a painting problem. 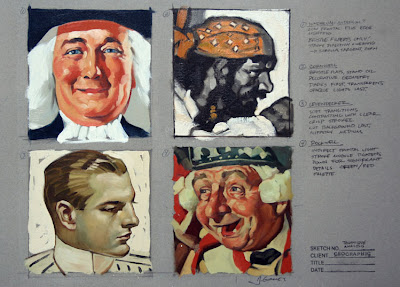 The goal of these copies was to compare how four classic illustrators painted a head. You may recognize, clockwise from the upper left: Haddon Sundblom, Dean Cornwell, J.C. Leyendecker, and Norman Rockwell. By trying to replicate a little detail from each one, I could get a better feel for what kind of brushes and mediums they used and what sequence of steps they had to follow to get their results.

Leyendecker, for example, must have spent time in the early stages working out soft transitions within the form. Only at the end would he cut in the background with big light strokes using a smooth, slippery medium.

Each of these great illustrators developed his own way of painting by absorbing earlier masters. There’s a bit of Zorn in Sundblom, Brangwyn in Cornwell, Bouguereau in Leyendecker, and Rembrandt in Rockwell. We stand on each other’s shoulders, and we see through each other’s eyeballs.
Source: gurneyjourney.blogspot.com
6 Comments+ Sharelabels (1)Flag
AllGolden Age Illustration

Copies from the Masters, Part 1 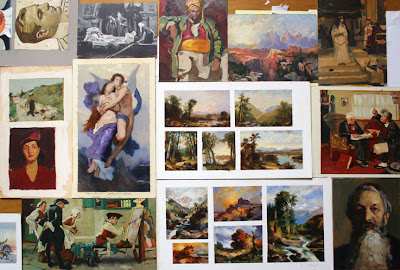 From what I’ve read about 19th Century art training, students used to spend a good deal of time making copies of the old masters. I don’t know how many art schools these days are encouraging the practice, but I think it’s a great idea. It forces you to appreciate in a much deeper way what your heroes were actually doing.

I made these copies from reproductions of some of my favorite academic painters, Hudson River School artists, and golden age illustrators. They’re all in oil, mostly about 6 or 8 inches across. I’ve never had the nerve to set up and do a copy in a museum, but I salute those who have.
Source: gurneyjourney.blogspot.com
7 Comments+ Sharelabels (3)Flag
AllAcademic PaintersGolden Age IllustrationHudson River School