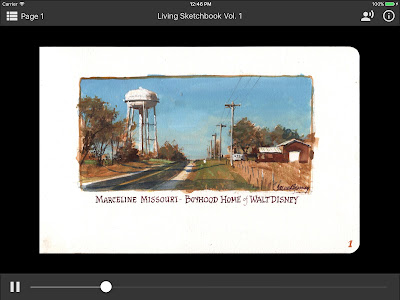 It's new technology that lets you experience one of my sketchbooks on your smart phone or tablet (Android or iOS).

You will be able to:
• Explore every single page in high resolution with pinch-to-zoom interactivity.
• Listen to voiceover describing the details of brushes, paints, and technique.
• Hear the actual sounds recorded while the paintings were completed.
• Watch videos of some of the images actually being painted.

We looked around, and there was no existing authoring software that could give us the tools we needed to create this app. So my son Dan Gurney wrote the app code from the ground up. We've created a custom multimedia experience that's unlike anything out there.

Right now we're looking for a very small number of beta testers. If you'd like to be considered as an app tester—EDIT: Sorry, we've already had far more than enough applications. Once this initial test phase is over, we'll release the app to everyone before the end of the month.