Published:
Here's a drawing of a belt-driven drill press, drawn in pencil and gray wash. Gray wash is watered-down ivory black watercolor, carried around in a little bottle and applied with a sable brush. 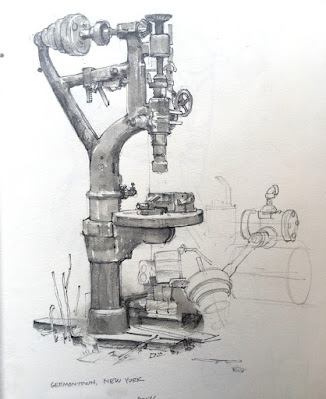 Belt drives were common before electric motors were small enough and powerful enough to attach to each piece of machinery. When it was originally set up—probably driven by a water mill—the operator could change the speed (and torque) by switching the belt over the smaller or larger pulleys in the upper left. Bevel gears at the top transfer the axis of rotation from horizontal to vertical.
----
After my post about this on Instagram, there were some interesting comments:
Bonny Hartigan: "My dad had a woodworking business and when I was a child, most machines were belt driven with water power. It was so quiet compared with the electric motors that he had later. All you heard were the whirring and slapping of the belts. What a wonderful memory that is, thank you for reminding me."

DK Vosburgh: "The sad thing is that most of these old machines fell out of use when their babbitt-metal bearings wore out, and people had forgotten how to cast new ones. They worked fine, otherwise."

Ken Simpson: "When [I was] a young fellow working in hardware store we sold the flat belts and joiners, the 2” belt was sold to the local school to make hand straps to punish boys in fractions."
Source: gurneyjourney.blogspot.com
4 Comments+ Sharelabels (1)Flag
AllPencil Sketching 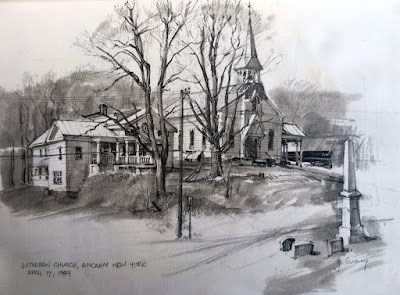 The gray wash is diluted ink that I carried around in a plastic jar. It works nicely for a quick shadow value, but it's light enough to allow the soft pencil lines to stand out.
Source: gurneyjourney.blogspot.com
2 Comments+ Sharelabels (1)Flag
AllPencil Sketching 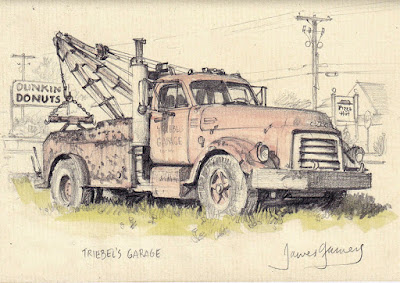 Published:
Frederick L. Griggs was known for his etchings of architecture, but he was a notable pencil sketcher too. 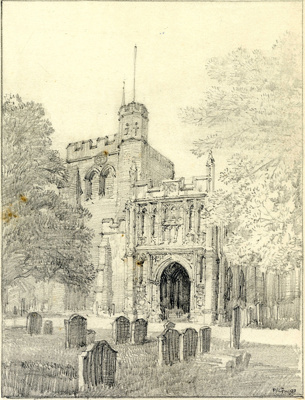 Hitchin Church from the South-East by F. L. Griggs
In his book "The Art of Drawing in Lead Pencil," Jaspar Salway praised his technique of suggesting distance and atmosphere. Salway suggests that the artist needs to have a plan in advance for lightening the values as you go back in space, rather than relying on erasing or "wiping out."
He says: "No process of wiping out at a later stage will give the quality here needed. It is desirable when working to 'hold tight' to the mental impression of the effect, and to visualize sunlight, haze, shadow and so on, as it was associated with each feature in reality." 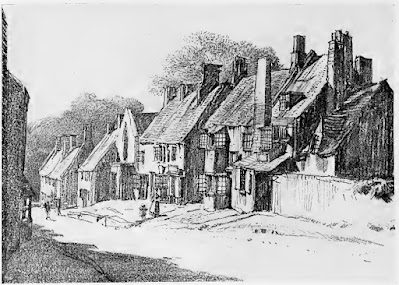 "Here we see a masterly drawing by F. L. Griggs in which a sense of light pervades the whole aspect. There is obviously no process of 'wiping out' in this successful work."
-----
Books
The Art of Drawing in Lead Pencil
Highways and Byways in Buckinghamshire, Illustrations By Frederick L. Grigg 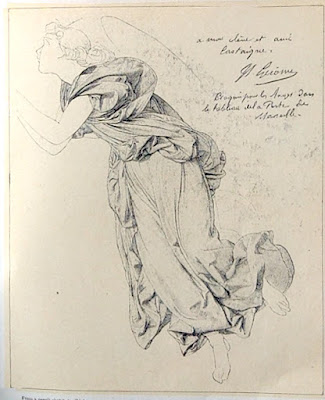 Why Draw from Life?

Published:
domi_digital asks: "I need to get something cleared up. What is the biggest reason that pro artists tell me to draw from life? My opinion is, it's to get a sense for 3d space, and therefore placement of objects in that space. I've drawn from life before, but as a beginner it was really overwhelming. I drew still objects, but I can't even imagine how hard it is to draw a moving subject." 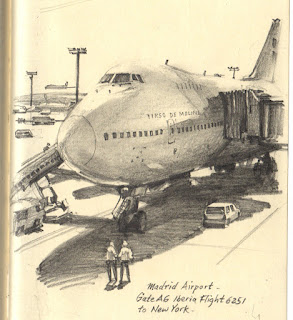 Answer: Yes, you're right. Translating 3D space to a 2D piece of paper is a cognitive skill that you develop while drawing from life. Does that skill make you better at creating a sense of solid 3D form or a feeling of depth when you draw from your imagination? I don't know, but I suspect it does.
Also, as you suggest, when you draw a moving object, you develop your speed of execution. You'll be able to paint a picture in a fraction of the time it would take you in the studio.
But drawing from life is more than a method of developing your skills. It builds your visual vocabulary. It puts you in direct contact with visual effects that cameras can't see.
There's no filter. There's nothing between you and the subject: no lens, no film, no sensor, no distortion, no picture frame, no style guide, no color picker, no caption, and best of all, no words. As long as you're looking at photos or other people's art, you remain in the cave looking at shadows on the wall.
Drawings done from life by artists from centuries ago somehow transcend the stylistic mould of their times.
Finally, it's a powerful experience on its own terms that makes you feel more alive and connected. When you draw or paint from life, you become very aware that everything is moving and changing: the sunlight moves, flowers fade, and the tide comes in. It's always a good thing to get in touch with the dynamic universe.
Source: gurneyjourney.blogspot.com
2 Comments+ Sharelabels (1)Flag
AllPencil Sketching

A Tip for Sketching Kids

Published:
How do you draw kids without them being self conscious?
Adolph Menzel "would go out in wind and weather but one day when there was too heavy a downpour, he came into the music room where my two little sisters were playing Haydn’s ‘Serenade’ together on the piano."
"'Children,' he called out, 'I want to draw the candelabra, play something for me while I’m drawing’, and thus he could capture the undisturbed image of their playing in all its naturalness and sketch the picturesque, unique likeness of them with which he later delighted [their] parents." Quote from Art Dealer Stephen Ongpin.
----
Book, edited by James Gurney "Adolph Menzel: Drawings and Paintings" also available on Amazon.

Published:
Here's a quick portrait sketch of my son Dan. He lives in Dublin, Ireland now, doing app development for a software company, but luckily he's able to work from home. 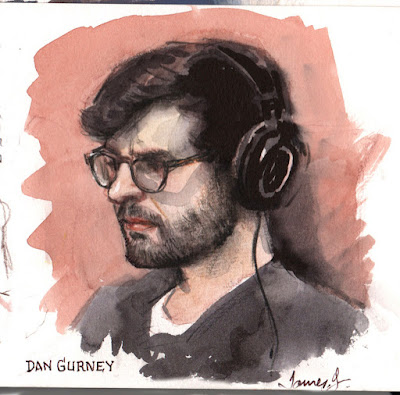 , and a water brush

in a watercolor sketchbook

Why Choose a Pencil instead of a Paintbrush?

Published:
My next article in International Artist Magazine (Issue 132 April/May 2020) is about the pencil, the the universal tool for any artist or designer.
A graphite pencil is the medium of choice when I’m interested more in form than I am in light or color. If I was painting this scene, I would be thinking about warm versus cool colors, atmospheric perspective and reflected light. With pencil I can concentrate on the bones of the scene, the simple overlap of light and dark shapes. If there’s a light mast or railing, I’ve got to be sure to draw around it. 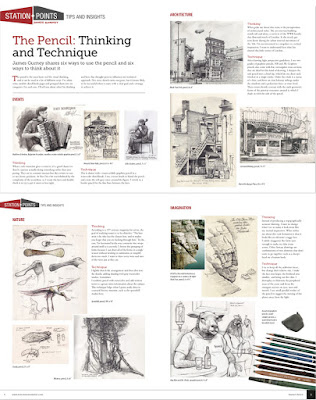 Since pencils can be used in a lot of different ways. I’ve taken some random sketchbook pages and grouped them into six categories: events, architecture, nature, imagination, vehicles, and people. For each group, I suggest some different techniques, and different attitudes or mindsets that I bring to the challenge. 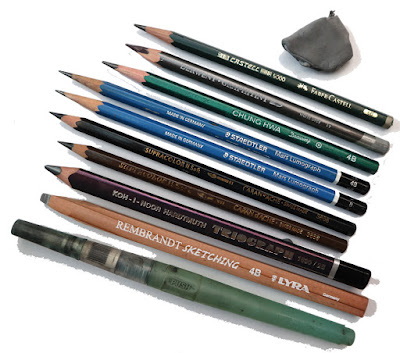