On Instagram, Paul T Levin asks: "James, you did a video about plein air nocturnes a while back where you talked about good lights but I can’t find it. What do you recommend if I may ask?"

I answer: I don't know to be honest, since everything is changing so fast in the LED space. Anybody have a suggestion for good book light or headlamp with adjustable light levels?

Cleve Page answers: "I got a Lumecube 2.0. It has adjustable light levels and there are attachments like barn doors or snap-on color filters. It's an excellent product. It also has 1/4-20 threads so you can add it to a separate structure. It's more pricey than a headlamp, but it's much more capable."

Fiona Fleming adds: "I just purchased a Vekkia 19 LED Music Stand Light with a nice substantial clip, and a flexible arm…the light alters to warm, medium or cool and can be directed right onto the surface. I haven’t road tested it on the easel at night yet, but I might tonight! It charges with a USB cable."
J. Owens says: "(There are) a few different headlamps for camping and I believe most have adjustable levels. Mine is a PTEC, (Princeton Tec) it has three levels along with a red light."

Drew Baker I've mused about putting something using srtip LEDs from Waveformlighting. My thinking is a very high CRI source would be a better approach than something with tunable temperature and questionable CRI.

Edgeprogear sells a light for their pochade boxes. It's essentially a Vidpro LED-230 on a gooseneck, with a bespoke mount for the Paintbook. (At least, that's what mine is.)
Brian Meyer I paint at night, at concerts, etc. Basically I have bought every light you can get. The ones I prefer now are rechargeable, which can last 2-3 hours.

The last one I got is the best so far, its designed for musicians, its battery on bright lasts an entire session of 5 hours, and it goes from 4 to 3 on its power display, I have used it two sessions in a row without recharging.
(photos from Brian Meyer)

The kit I purchased can run off the included 12-hour lithium batteries so this would allow painting on location far away from any other electrical source for an extended period of time.

Although I haven't used them for an en plein air nocturne, I do plein air oils and am always looking for an efficient means of transporting my gear. I can envision these old bones including such a light in an excursion. The kit essentially could be doing triple-duty (copywork, studio painting, and night painting on location) if I decide to try a nocturne. Their use in conjunction with polarizing filters on the lights and camera lens makes a remarkable improvement when copying art. Because of such versatility, they may be worth consideration.

I paint at night, at concerts, etc. Basically I have bought every light you can get.The ones I prefer now are rechargeable, which can last 2-3 hours.

The last one I got is the best so far, its designed for musicians, its battery on bright lasts an entire session of 5 hours, and it goes from 4 to 3 on its power display, I have used it two sessions in a row without recharging.

Good for extra light, like on your palette and paint mixing areas, or as a backup main light. Its also better light, good for when recording with a GoPro.

Always plan on the batteries dying and have a spare.

Published:
In a new YouTube video I show how I painted this moody morning scene in gouache by sacrificing detail and emphasizing light effects.

My goal is to capture a fleeing light effect by using a warm priming color to achieve a "photographic" lens flare. Halfway through, I paint over the whole thing with a glaze to reduce detail. The glaze is risky because gouache reactivates when it's rewet, and to be honest, it's kind of a disaster for a while. 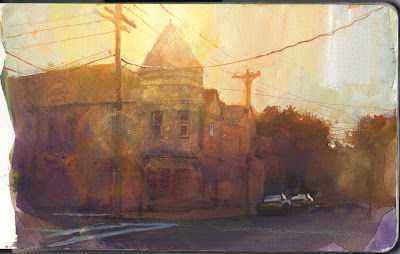 Here are some takeaway quotes about the theory of sacrifices:
“Nature instills sentiments in the spectator through the selective sacrifice of details in order to improve the overall effect.”

--The Theory and Practice of Water Colour Painting: Elucidated in a Series of Letters

“Painters without experience often weaken the effect they wish to produce by a prodigality which multiplies uselessly the figures and accessories of a picture. It will not be long before they learn that, the greater the conciseness and simplicity with which a thought is interpreted, the more it gains in expressive force.”

—Jules Breton, The Life of an Artist: An Autobiography, 1890

Landing the Spirit of St. Louis 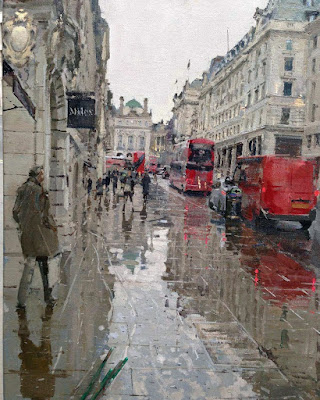 Urban plein-air painter Pete "The Street" Brown shares his thoughts as he paints a London cityscape.
(Link to YouTube)

He talks about the difficulty of choosing a motif and his ideas about "mapping out" the shapes with a brush on a piece of toned MDF board or canvas.

The video shows how he builds up the image with blocks of tone rather than with lines defining boundaries.

With Bierstadt on a Painting Expedition 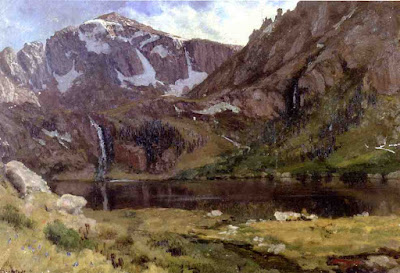 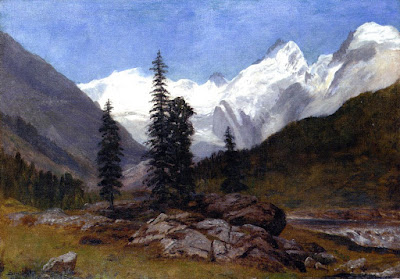 Byers waited patiently for Bierstadt to finish the color sketch, which the artist thought had taken fifteen minutes. Byers said: "You were at work forty-five minutes by the watch!"

The artist produced one sketch after another, each time exceeding his estimate of how long it would take.

“Wait twenty minutes while I sketch this storm.” They waited, but twenty minutes flew by, and he was still at work. Thirty, forty, and fifty minutes, and then an hour was gone, and the artist, absorbed in his work, was earnestly engaged in transferring the natural sublimity before him to paper. At the end of an hour and a half the artist completed his sketch." 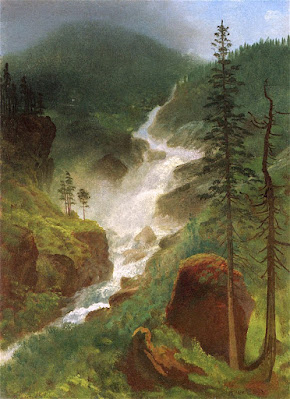 According to Eleanor Harvey in her book The Painted Sketch,

"'It was claimed that the artist’s recording “every detail of so wide a view in time—sketches, each limited to twenty minutes, and each noting the time of day, and consequent relative position of the sun, is one of the secrets of M. Bierstadt’s success.' He also developed a reputation early in his career as a prolific artist in the field, evidenced by the weight of his accumulated materials.”

The Painted Sketch: American Impressions From Nature, 1830-1880 by Eleanor Harvey 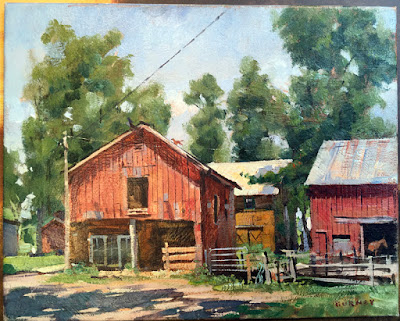 I've sat in the hayloft on a summer day. It's peaceful and quiet up there with a bright sunbeam slanting in the hayloft door.
One of the sheds has old wagons and carriages parked inside it, almost as if they're ready to return to the roads again in case those newfangled automobiles give up the ghost.
Source: gurneyjourney.blogspot.com
2 Comments+ Sharelabels (1)Flag
AllPlein Air Painting 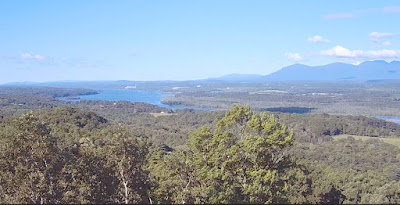 Olana, the home of landscape painter Frederic Church has installed a  live skycam on its tower. Called "Olana Eye," it lets anyone stream the famous view of the Hudson River at any hour and in any weather.

Published:
I'm guessing he painted this over a prepared gradation for the sky color. Click on the image to get the full study.
Source: gurneyjourney.blogspot.com
4 Comments+ Sharelabels (2)Flag
AllHudson River SchoolPlein Air Painting

Easels in the Sacristy

Published:
In late-nineteenth-century Venice, worshippers and tourists had to share St. Mark's cathedral with painters. According to artist and ambassador Maitland Armstrong, the artists were given an honored place:

"In San Marco the artists were privileged; we could sit and paint wherever we pleased, no one ever interfering with us; we were allowed to store our easels and canvases in the sacristy—there were so many of them that it looked more like a studio than the robing-room of a church... Never was there a more delightful place to work in."

----
Quote from Day Before Yesterday: Reminiscences of a Varied Life

by Maitland Armstrong, 1920
Painting reproduced in The Lure of Italy: American Artists and the Italian Experience, 1760-1914